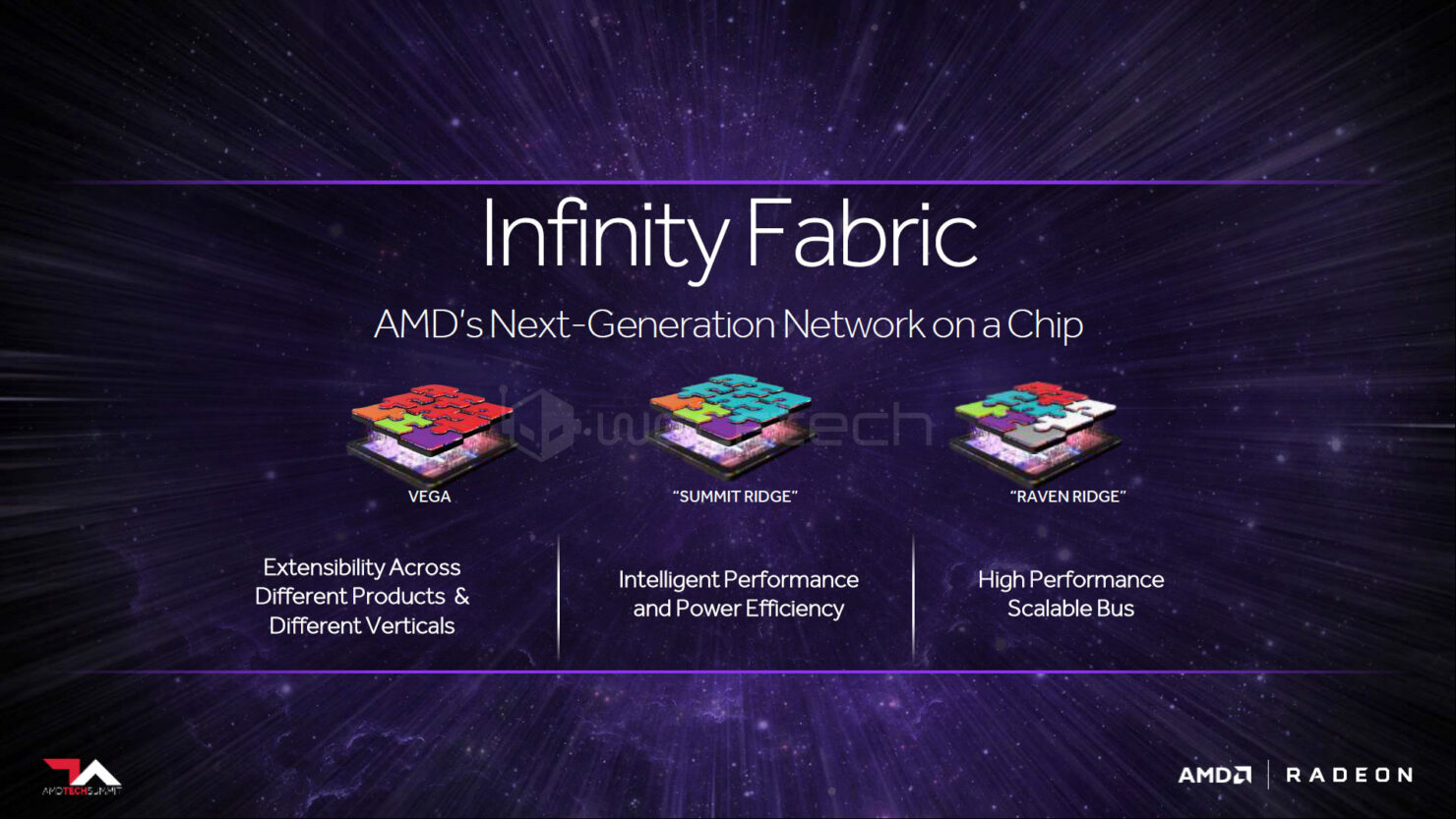 Today we are going to be talking about something that will be playing a very subtle but important part in AMD’s upcoming Ryzen CPU and Vega GPU. Infinity Fabric is basically an over-arching superset and successor of the classic HyperTransport and will be debuting along with Ryzen whenever it comes out. It may not have gotten the same spotlight as the product that's based on it, but rest assured, it is just as important and exciting a technology.

AMD's Infinity Fabric to debut with Ryzen and Vega

Before we go into any details regarding Infinity Fabric let me first do a quick brush up on what HyperTransport is, since that is where our story begins. HyperTransport is the equivalent of Intel’s Front Side Bus (FSB) and is basically what the various ICs use to talk to each other. Think of it as a point-to-point interconnect used to, well, connect ICs. Unlike Intel’s FSB however, it is completely open source in nature and much more flexible than its counterpart, allowing it to be used across various processors (Intel’s FSB is tailor made for every processor variant).

Hyper Transport is also used as an interconnect for NUMA multiprocessor implementations deploying a proprietary cache coherency solution (and yes the Coherent Fabric we keep on talking about is a derivative of this concept). Needless to say, it is the bread and butter of AMD’s chip building philosophy. Infinity Fabric is something that enlarges the scope of HyperTransport, building it up even further into something that will be used across all its Ryzen CPUs and Vega GPUs.

In a way, Infinity Fabric along with subsets like Coherent Fabric can be thought of as a superset of a new and improved HyperTransport 2.0 considering it utilizes the HyperTransport messaging protocol. We do not know much about it right now but we do know that:

It will be used as both a network-on-chip solution as well as clustering link between GPUs and x85 server SoCs. CCIX standard is also supported which will allow it to be coupled with accelerators and FPGAs.

Infinity is agnostic on topologies and will be implemented like a mesh on Vega, said Maurice Steinman, an AMD fellow for client SoC architectures and modeling. It can provide the full bandwidth of any attached DRAM.

“That was something that we could not do in the past,” Steinman said

“We had multiple on-die protocols trying to do the same thing that gave us some inefficiencies,” Steinman said. He added that creating a new interconnect “was a huge investment, but we are seeing the ability to do variants and architectures we could not do that we are now embracing.”

In the past, an on-chip network change early in an SoC design cycle might have taken six months, “but we can do it now in a few hours,” he said. In addition, AMD is able to offer more interconnect variants to its ASIC customers, such as the videogame console makers. Source: Interview to EETimes

So what is the big deal about it? Well, even if you are to leave all the high level talk behind, one of the biggest impacts of Infinity Fabric is that it will allow AMD to fully utilize DRAM available to any SoC or GPU. This means that textbook and theoretical performance limits will be achievable and will result in an overall power efficient architectural design.

Secondly if you take a look at the slides, you will notice how the Infinity Fabric is now so much more than just HyperTransport. It is the physical implementation of AMD’s all-encompassing Lego philosophy, for lack of a better word, where everything is fully scalable and 100% flexible.

Infinity Fabric is a coherent implementation which means that cache coherency is maintained across multiple processors externally and scaling up cores, in a CPU or a GPU, is not a problem and only limited by the bandwidth of the transport itself (which we have mentioned above). This philosophy is in contrast to Intel’s stricter vision of a tailor-made design. It also allows AMD to scale up and down designs within a matter of hours rather than months without spending additional human capital or resources. This flexibility will allow it to serve a larger number of custom clients than anyone else.

AMD’s Infinity Fabric is basically divided into two distinct components or philosophies. Data Fabric scalability and Control Fabric scalability. When we usually talk about scalability, we are talking about the Data Fabric portion of things. This includes the HyperTransport concept, and the scalability in terms of cores/CPUs/dies etc. Needless to say we have already seen firsthand how well AMD is able to handle a diversified range of custom solutions.

The second offshoot is called the Control Fabric and is something that is newer, and very interesting. It extends the same concept but on a more intelligent level. For example, Ryzen will have machine learning integrated into the processor design so it will get modestly better at recurring tasks. Intel also has its own branch of prediction management but lets not get into that right now. This is just one example of the intelligent approach to the control design that has been taken as far as Infinity Fabric is concerned.

All of these things combined means that we will be seeing products from AMD that are constructed using a unified, flexible platform that uses a similar building block in just about everything. Oh and compatibility will be the cornerstone of this design implementation. I assume this would only solidify AMD’s position in the console market because the company will literally be handling them all more flexibility than they could ever ask for.