OneRaichu has been on point with all of his leaks regarding Intel and AMD CPUs and has now shared the IPC figures for both AMD's Zen 4 cores and Intel's Raptor Cove cores. The figures for Golden Cove (12th Gen P-Core) and Gracemont cores (12/13th Gen E-Cores) are also added for comparison. The performance was evaluated in SPECCPU2017 Rate-1 at a fixed clock speed of 3600MHz or 3.6 GHz across all chips. The leaker also compared how memory affects IPC with a DDR5-4800 and DDR5-6000 comparison.

It is stated that AMD's Zen 4 has a great cache configuration which makes it so that it is not highly dependent on DRAM. As such, while DDR5's higher latency and Gear2 mode can result in a 15 ns slower latency than DDR4-3200 JEDEC, the results only affect the IPC by 2%. 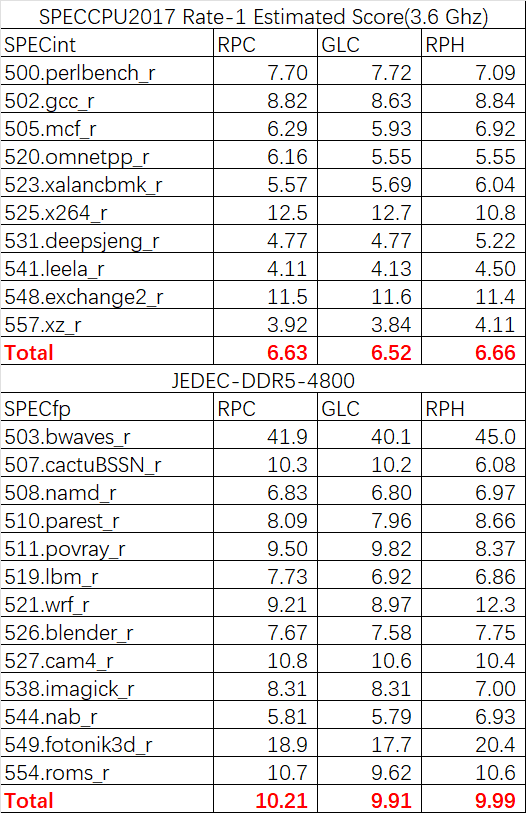 The same is the case with DDR5-6000 memory with Intel's Raptor Cove and AMD's Zen 4 cores offering similar IPC results of 6.81 and 6.77, respectively. This is about a 1% increase in IPC over Intel's Golden Cove cores. In Specfp, the Raptor Cove cores have 4% higher IPC than Zen 4 & 3% higher IPC than Golden Cove cores. We can also see 13th Gen Gracemont cores offering a 6% IPC uplift in SPECint and a 7% IPC uplift in SPECfp versus the previous 12th Gen Gracemont cores. We can again notice that all three architecture, Raptor Cove, Alder Lake, and Zen 4 have IPCs in the same ballpark.

So it looks like the main thing that users will be looking for besides IPC for next-generation CPUs is the maximum clock speeds that they have to offer along with the cache structuring which will play a very important role, especially for gaming applications. We also have to keep the CPU efficiency & power numbers into perspective but it will be very interesting two months of testing for the AMD Ryzen 7000 "Zen 4" and Intel 13th Gen "Raptor Cove" CPUs.

Bulls Rejoice: A Brand-new Inverse Cramer ETF (SJIM) Is About To Hit the Market