AMD Will Talk About Next Generation Image Scaling At GDC 2022 – Is This FSR 2.0?

AMD appears to be ready to present a successor to FSR 1.0, and finally offer an AI-based upscaler that can compete with XeSS and DLSS 2.0. In a presentation spotted by Videocardz, we can see that AMD's Thomas Arcila and Colin Riley are going to be presenting "Next-Generation Image Upscaling for Games" on March 23 at GDC - something that sounds eerily close to an FSR successor (whatever AMD decides to call it).

Is AMD finally going to present an AI/ML-based FSR 2.0 implementation?

FSR and machine-learning based AI upscaling solutions like XeSS and DLSS 2.0 are not alike. While XeSS and DLSS 2.0 are upscaling systems based on Deep Learning/Inference and use actual hardware to enable performance enhancement without any serious quality degradation - FSR is a simple spatial upscaler. The two classes of upscale are not even remotely comparable and is like resizing something in photoshop versus resizing something in Gigapixel AI. The latter is a far superior result. 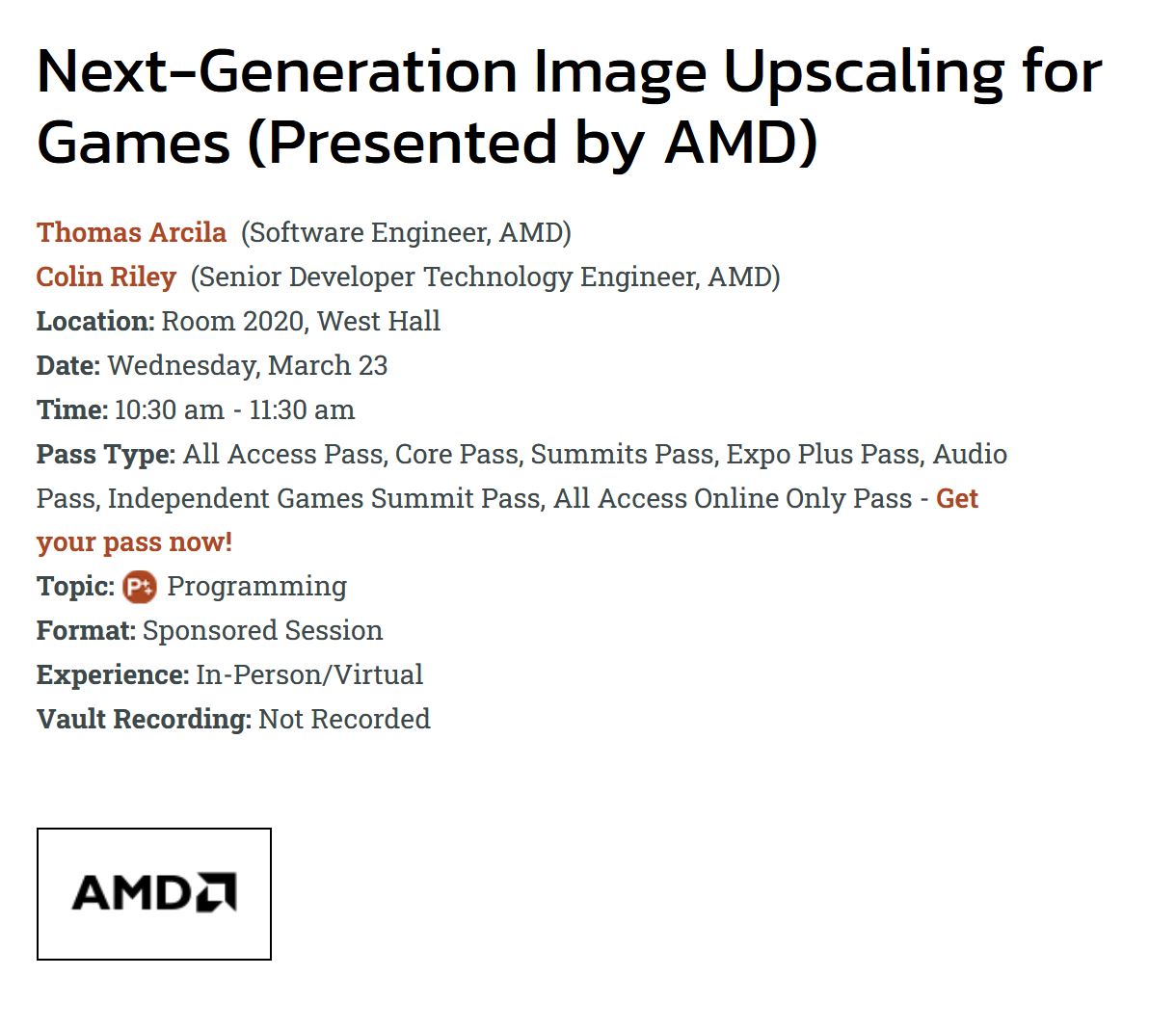 All this, however, appears to change as AMD has a presentation scheduled on something that looks eerily similar to the first foundational presentation on FSR 2.0 (or whatever AMD decides to call it). To be clear, it's very unlikely they will launch the full presentation here but we might see the initial MVPs/development builds of AMD's new upscaling techniques.

"A little later in the morning Colin Riley and Thomas Arcila will take us through their talk on Next-generation image upscaling for games. This session will cover some of AMD’s latest research in image upscaling technology, as well as how this technology could help improve the gaming experience."

The blurring on the right is the telltale sign of a generic spatial upscaler. (AMD Godfall Demo)

FSR 1.0 is an algorithmic spatial upscaler, DLSS 2.0 is a machine-learned quality inference system from lower-resolution input images. It uses a temporal feedback loop and is vastly more complex than standard spatial upscalers which have been around for decades in third-party plugins. To the discerning eye or someone from a computer science background, this makes all the difference in the world. Machine learning allows us to achieve results in certain situations which computationally infeasible to reproduce using traditional software architectures. This is one of the reasons why AMD FSR suffers particularly hard at lower resolutions (without inference, spatial resolution relies on the input details) and is pretty decent at bigger resolutions.

FSR has been a resounding success for AMD since they open-sourced it for everyone to use and adoption by game developers was significant. Considering the announcement was posted on GPU open as well, it is very likely that AMD could opensource the new version of FSR as well. Since Intel XeSS has already pledged to be open, this would be something that gamers and developers will readily expect of AMD - not to mention that its upcoming GPUs will have all of the hardware needed to support sophisticated upscaling techniques.