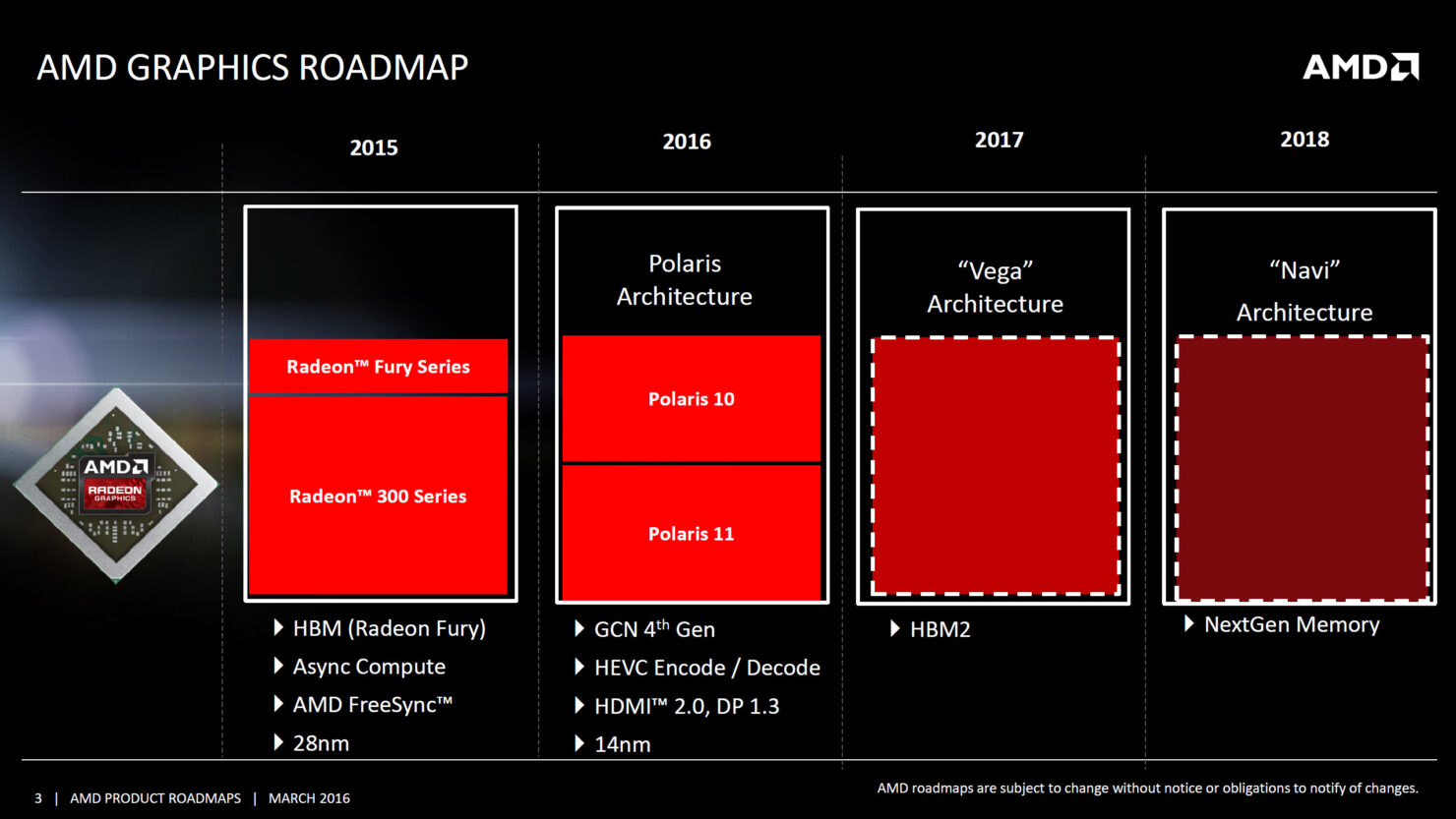 Navi was originally scheduled for release in 2018.

AMD's major server roadmap, detailing their next generation Vega and Navi GPUs has been leaked by Videocardz. The roadmap that spans up to 2019 shows how AMD will configure their next-gen GPUs into different server segments that include applications like HPC, Deep Learning and Inferencing.

The latest roadmap leak comes just a day after major specifications were also revealed by Videocardz. 2016 started off with AMD replacing most of their graphics lineup with Polaris based cards. With the exception of high-end products, the Polaris 10 and Polaris 11 cards based on FinFET architecture delivered good improvements across the board. Whether that be in terms of efficiency or performance but the most stellar selling point for these cards was their competitive pricing. 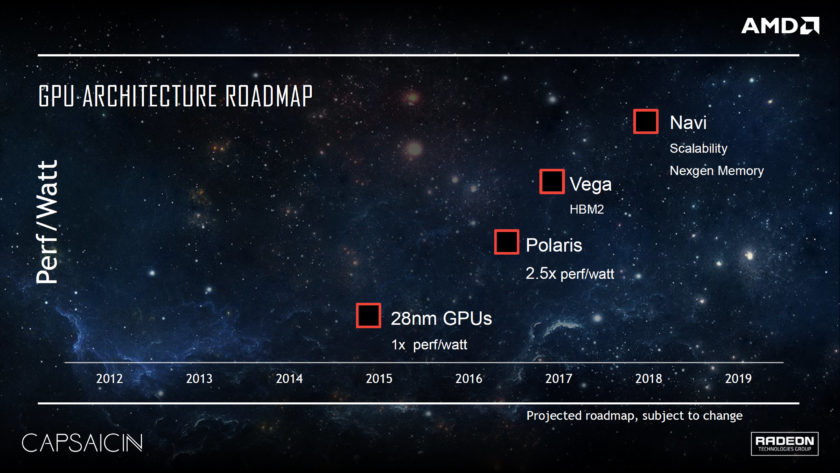 Moving on, AMD is expected to launch new high-end, enthusiast products in the market. But the products we are looking at today are not aimed at consumers or gaming enthusiasts but rather, the server market. So let's take a look what 2017 and beyond has to offer in terms of server aimed products from AMD.

The AMD Radeon Pro series was introduced two months back and featured a range of Polaris 10, Polaris 11 and Fiji based cards. The main attractions were the Radeon Pro WX 7100 and Radeon Pro SSG. The former is the most affordable work-station card while the latter is a heavy-duty, Fiji based card that comes with a on-board SSD solution to deliver immense boost in productivity and performance on workstation suites. More on these two cards here.

AMD plans to introduce a new server-focused card in this lineup too. Based on their Fiji GPU, the card would be known as Radeon Pro S9 Nano. The "WX" stands for workstation while "S" stands for server. The solution is expected to feature the same specifications as the Radeon R9 Nano along with some clock adjustments. The new launch could happen in a matter of weeks as mentioned in the leak. Radeon Pro S9 Nano will aim the inference market and can be sighted as competition against NVIDIA's recently launched Tesla P40 solution for inferencing. 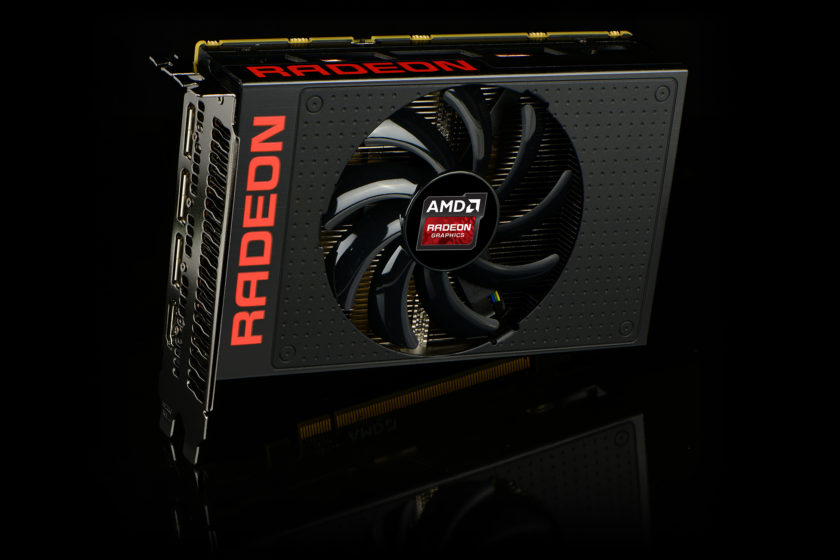 The R9 Nano, although expensive, was an impressive product with insane specs in a SFF solution.

Of course, the Radeon Pro S9 Nano won't be the only inferencing card available. AMD will also launch cheaper cards based on Polaris 10 and Polaris 11 GPUs. These will go in nicely against the Tesla P4 solution with possibly affordable price bracket. 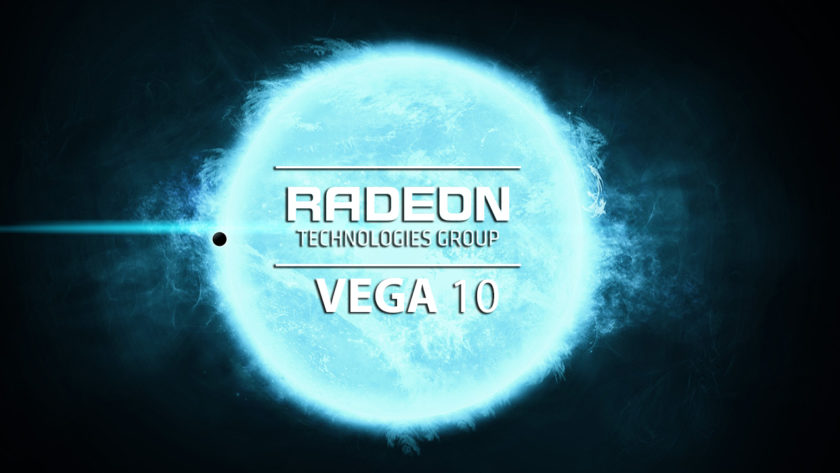 Now we noticed that Vega 10 isn't aiming the HPC market but instead, focused at the Deep Learning servers. It will have two parts available in 2017, a single chip and dual chip solution. Both feature double precision at 1/16th the rate of FP32. It confirms that Vega 10 is similar to GP102 which cuts down double precision compute from the more beefy GP100 GPU. The details on this will be covered in a more informative article later on.

This shows that Hawaii will still stand as the HPC muscle up till 2018. A new GPU will be developed by AMD in the meanwhile known as Vega 20 with DP rated at 1/2 of SP. This would be a solution targeted at GP100 or the new GV100 chip based on Volta which is expected to be introduced by then.

The latter is more possible since Vega 20 would not only use a enhanced built design but also come packaged in the new GloFo 7nm FF process. Global Foundries has already announced risk production of 7nm FF in 2018 so we might just get to see Vega 20 in some form in that year. With up to 32 GB of HBM2 memory (1 TB/s) and a fast 64 compute unit design, this chip will have impressive double precision capabilities for HPC platforms.

Also, do you remember that we mentioned a high-performance interconnect being developed by AMD a while ago? Looks like the solution will be known as xGMI. This peer-to-peer solution will be embedded in HPC servers that include Vega 20 and Zen based Naples processors.

Moving forward, AMD has plans to ship Navi in 2019. Now you might believe that Navi has been delayed but we don't find that as the case. This roadmap is specific to the server platform and these products have the tendency to arrive later as compared to consumer parts. Hence, Navi could still be a planned 2018 launch on the consumer side but could miss that time frame on the server side of things. 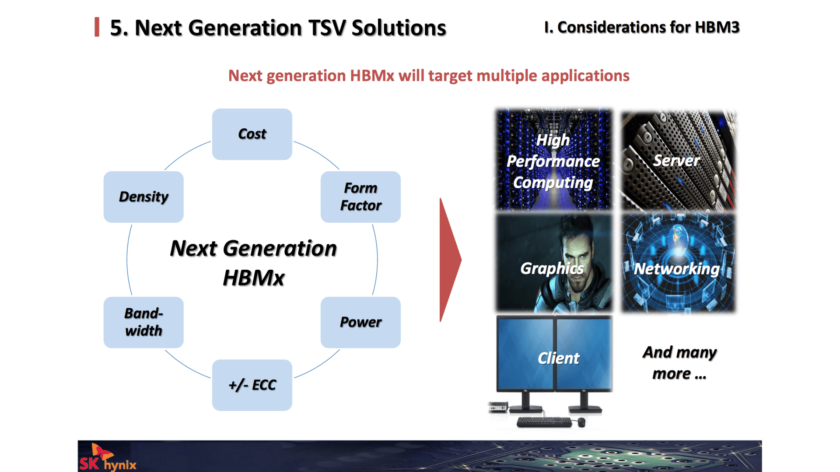 Next-Gen GPUs will leverage from more advanced memory solutions such as HBM3.

Nevertheless, Navi 10 and dual Navi cards are expected to ship in 2019. We can expect these cards to leverage from new GCN architecture, one that is revised extensively for greater efficiency leap over Vega. There's also next-gen memory (HBM3) and PCI-e 4.0 in the talks. Navi 10 will be aiming the Deep Learning market while the smaller Navi 11 core will be aimed at the Inference market.

Just like Vega, Navi won't see a HPC solution for a while. The Vega 20 GPU will be remain at the helm of AMD's HPC offerings and eventually be replaced by a powerful double Precision part in the form of Navi 20. This solution can hit the market around 2020. That's it as far as AMD's server roadmap is concerned, we will cover some specifications comparison between NVIDIA Pascal/Volta and AMD Vega/Navi GPUs in the days ahead to assess their potential in the HPC markets.