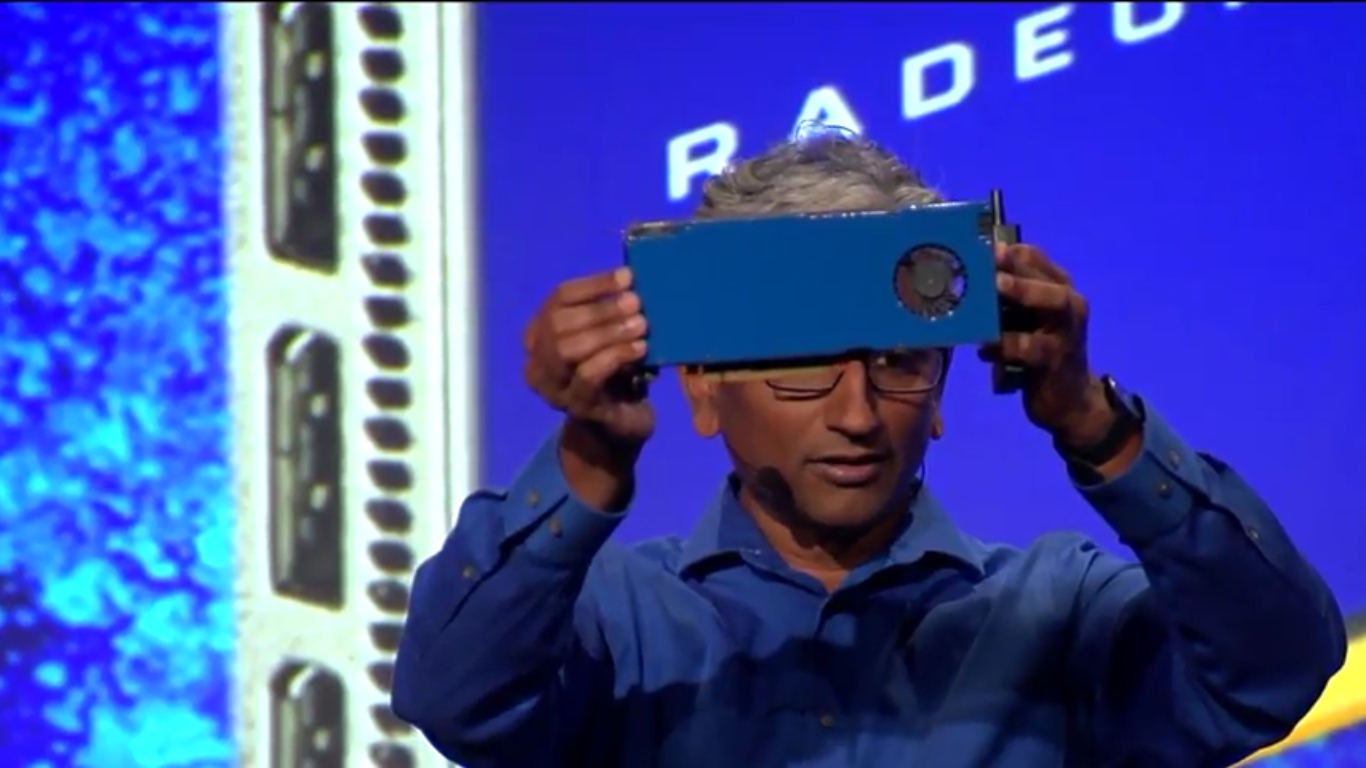 AMD has just announced their latest Polaris based Radeon Pro WX series and the flagship Radeon Pro WX 7100 graphics card for professionals at the Capsaicin Siggraph 2016. The latest cards are what AMD calls the most affordable, VR Ready, Workstation solutions built to date. Based on the Polaris GPU, we can expect these cards to deliver just about the same efficiency and performance numbers of the recently launch Radeon RX 480 and upcoming Radeon parts along with workstation capabilities that are tuned within the Radeon Pro driver suite.

The AMD Radeon Pro WX 7100 replaces the FirePro W7100 graphics solution from 2014 and features the latest core architecture, codenamed Polaris. AMD is once again bringing their Radeon Pro naming scheme and it looks like this will be the norm for all upcoming workstation cards as AMD tries to combines the Radeon and FirePro-W series into a single entity that offers great performance for content creators and gamers. AMD's Radeon Pro Duo was a prime example of this combo and has been one of the most impressive workstation offerings seen to date in a dual-GPU configuration.

“With Radeon Pro, AMD has crystalized a clear strategy to drive the democratization of content creation,” said Jon Peddie, president and founder of Jon Peddie Research, in a statement. “By offering highly capable graphics hardware and harnessing the best open source software, whether from AMD or contributors worldwide, they are effectively building a huge ecosystem to address the demanding challenges faced by graphics application designers.” via AMD 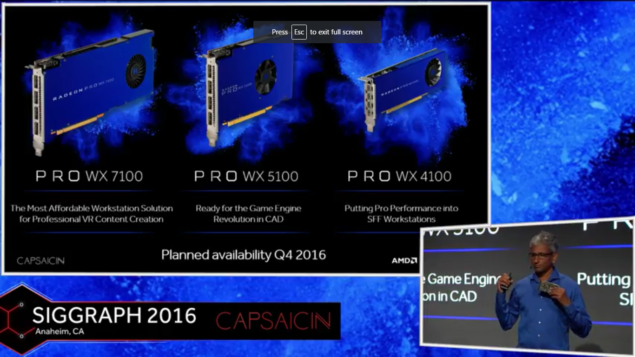 The Radeon Pro WX 7100 on the other hands keeps things on the lighter side but this card is also the most affordable workstation solution built by AMD. Based on Polaris 10, the card comes with a configuration that houses 2048 stream processors, 128 TMUs and 32 ROPs.

The card comes with higher clock speeds that offer more than 5 TFLOPs of single precision (FP32) compute performance. While being a Fire Pro W7100 replacement, the Radeon Pro WX 7100 offers much better compute numbers than the Hawaii Pro based W8100 (4.2 TFLOPs) and Hawaii XT based W9100 (5.24 TFLOPs) which is very impressive. 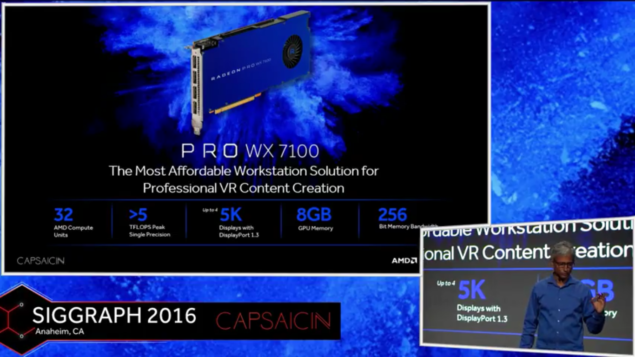 Other specifications include 8 GB of GDDR5 memory clocked at 7 GB/s along a 256-bit bus interface. This means that the card would feature a bandwidth of 224 GB/s which is the same as its consumer variant. The card has a single 6-Pin power connector to boot it up which indicates we are looking at a 150W TDP figure. For display I/O, the card feature four DP 1.3 connector capable of running four 5K (30 Hz) monitors. The card comes in a single slot, low-profile package which should be easy enough to accommodate inside workstation PCs in single or even multi-GPU configs.

AMD has also announced a cut Polaris 10 based soluton known as the Radeon Pro WX 5100. This card is very short with a PCB measuring the size of a Radeon R9 Nano. The card features 1792 stream processors enabled on its 28 compute units. This card also features 8 GB of GDDR5 memory clocked at 7 GB/s to deliver 224 GB/s bandwidth along a 256-bit interface. The card having lower clock speeds has a TDP around 75W and does not require any additional power connector to boot. 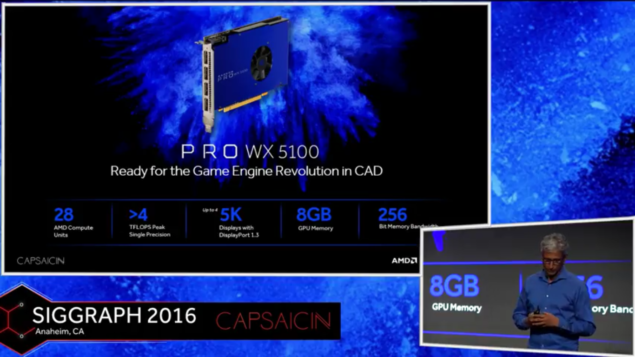 The card has more than 4 TFLOPs of compute performance and has 4 display port 1.3 ports that can drive four 5K displays. As for the card itself, it has a small blower fan that pushes air through a circular aluminum fin heat sink. Both the Radeon Pro W7100 and Radeon Pro W5100 would cost less than $1000 US which is a very good pricing for these cards.

The last card AMD released today is their Radeon Pro WX 4100 graphic card which is the first Polaris 11 based workstation solution. This card features 16 compute units which include 1024 stream processors. This is the full Polaris 11 SKU and a cut down variant is featured on the Radeon RX 460. This solution delivers more than 2.00 TFLOPs of compute performance and has 4 GB of GDDR5 memory running across a 128-bit interface. It is likely that the memory is clocked at 7 GHz to deliver 112 GB/s bandwidth. 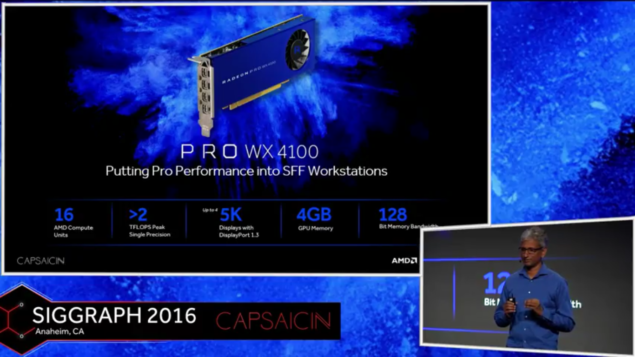 The AMD Radeon Pro WX 4100 comes in a single slot, low profile design which can is easy to accommodate inside workstation PCs with ease whether you are running a single or multiple of these cards. The card also comes with four Mini Display Port connectors to drive four 5K monitors. This solution should cost less than $500US. All Radeon Pro WX series cards will be available in Q4 2016. 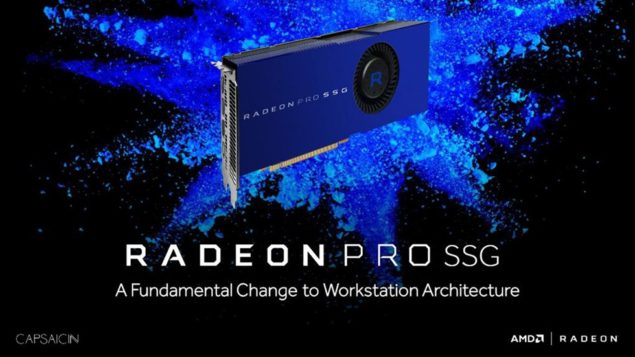 "One of the most challenging constraints faced by GPU computing applications is the inability to access terabytes of data," said Raja Koduri, senior vice president and chief architect, Radeon Technologies Group, AMD. "Radeon Pro SSG is poised to not only speed-up processing for many applications with very large datasets, but also to enable new application experiences by utilizing data persistence of non-volatile memory. This will be a disruptive advancement for many graphics and compute applications."

"AMD has a long history of memory technology innovations, and Radeon Pro SSG is the latest example," said Patrick Moorhead, Founder and Principal Analyst, Moor Insights & Strategy. "Larger local memory on the graphics card can speed-up processing for many applications with very large datasets, and should also allow for results with finer granularity and resolution. This will be a notable advancement for many graphics and compute applications." via AMD 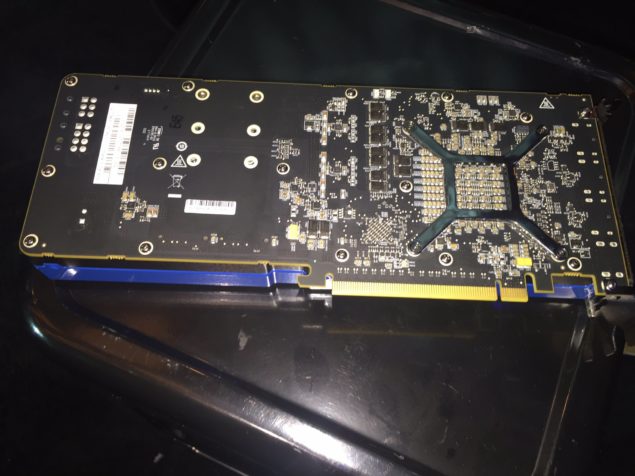 A picture of the Radeon Pro SSG PCB from the back captured by Fudzilla.

The technology allows AMD to feature large flash memory (M.2) on the graphics board along with the local memory that the GPU can send large data sets to directly rather than having it sent over the system memory which has slower processing capabilities. The card uses a Fiji chip which makes sense since it is a very beefy card with a lot of processing power. Power is provided through an 8+6 Pin configuration. The card also comes with two M.2 headers that are featured at the back of the PCB. 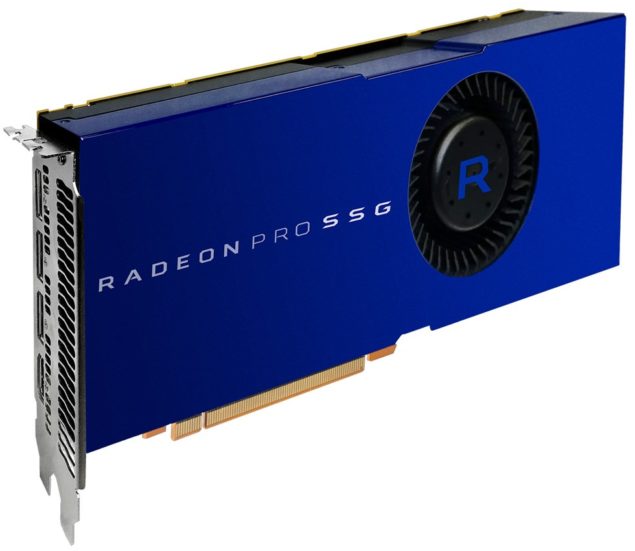 During the world's first demonstration of a Radeon Pro SSG solution, 8K raw video timeline scrubbing was accelerated from 17 frames per second to a stunning 90+ frames per second. As content creators rapidly adopt 8K resolution to future-proof their content, a 5X performance boost will improve quality of life, productivity and efficiency in the editing process. The Radeon Pro SSG Beta Kit will set you back for a price of $9999 US when it launches in 2017.