AMD launched their flagship Tonga GPU, the Radeon R9 380X, last month, featuring the updated GCN 1.2 GPU along with improved power consumption. Offering a replacement to the Tahiti GPU core, the Tonga core gears forward in the DirectX 12 titles while improving the overall GCN structure but something that was rumored for months now has been confirmed by PCPerspective. 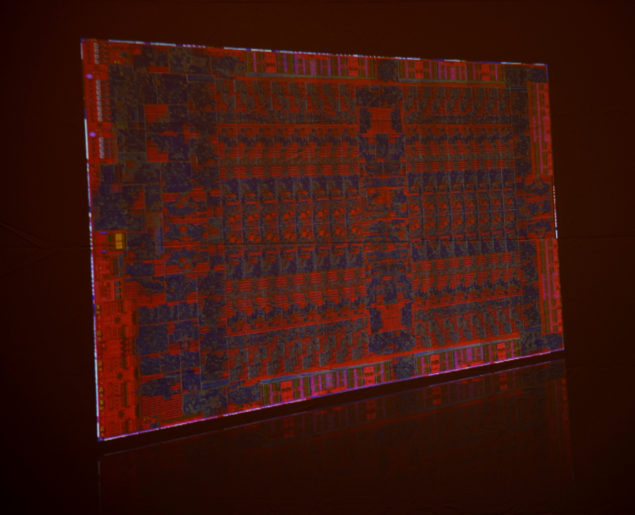 A die shot of AMD's Tonga/Antigua Graphics Core Based on the GCN 1.2 Core Architecture!

Ryan Shrout from PCPerspective confirmed through Raja Kadouri (AMD's VP of Radeon Technologies Group) that the Tonga GPU indeed rocks a 384-bit bus which we have anticipated since a long time now but the more interesting thing is that it was never utilized in the Radeon R9 380X graphics card. The Tonga core has seen a lot of delay in the desktop market, the first card, the Radeon R9 285 launched a year ago but that was a cut down core and a replacement for Tahiti Pro. The replacement for Tahiti XT had to wait a complete year till November 2015. Earlier this year, we heard reports that the Tonga GPU actually packs a 384-bit bus which was revealed in a die shot of the chip. When the Radeon R9 380X launched, it didn't feature that 384-bit bus but it did feature a full Tonga GPU.

AMD not only confirmed the 384-bit bus on the Tonga GPU, they also mentioned why it was never fully utilized. The reason they mention is that a 384-bit card didn't find a perfect performance/price slot. Keeping that in mind, I would say that it was actually a good decision to go with a 256-bit (4 GB VRAM) since AMD has placed their card in a price segment which remains unopposed by competition. At $229-$249 US, the card is a perfect 1080P card for gamers and packs a solid punch at AAA titles that will be built upon DirectX 12 API. There would have been a major difference in price positioning if AMD would have gone with a 384-bit bus since that would mean that they were going to pack a higher memory on the card (Up To 6 GB GDDR5). Staying with 256-bit bus gave AMD the chance to produce a cost effective offering in the sub-$250 US market.

Now question still remains whether AMD would launch a Tonga GPU with the full bus width? Chances are quite low since the $249 US aftermarket models offer great performance and at $329, AMD's Radeon R9 390 is one of the best price/performance ratio card. The latter offers 8 GB GDDR5 VRAM with a Grenada core and its the perfect card for 1440P gamers, the Radeon R9 380X is the perfect card for 1080P gamers with its 4 GB GDDR5 VRAM.

Both cards offer good competition against the GeForce GTX 960 and GeForce GTX 970 and have pushed NVIDIA to cut prices on their GeForce 900 series cards while a rumored "GeForce GTX 960 Ti" is also under plan to hit market sometime later. The price to performance gap isn't as wide in AMD's lineup as it was without the R9 380X, so there is little need to introduce a new card with a wider bus as it won't impact the performance so significantly. However, while there won't be any new Tonga cards in the 300 series lineup (strong possibility), there's a slight chance that we may see the 384-bit cards in the Radeon 400 series lineup which is scheduled for launch in summer 2016. Featuring two new FinFET based GPUs and a range of existing chips, the new card line up may introduce faster chips with higher VRAM to facilitate the need of higher memory demands on high res monitors.