AMD has officially launched their latest GCN 1.2 based Radeon R9 380X graphics card that features the Antigua XT GPU. The latest addition to the Radeon 300 series family brings improved performance for mainstream user, as it provides great gaming performance at resolutions up to 1440P while maxing out the visual details on 1080 (HD) resolution panels. The graphics card launch will be followed by the availability of the Crimson edition suite from AMD which marks a new era in their driver software portfolio, the drivers will be available to public on 24 th of November. 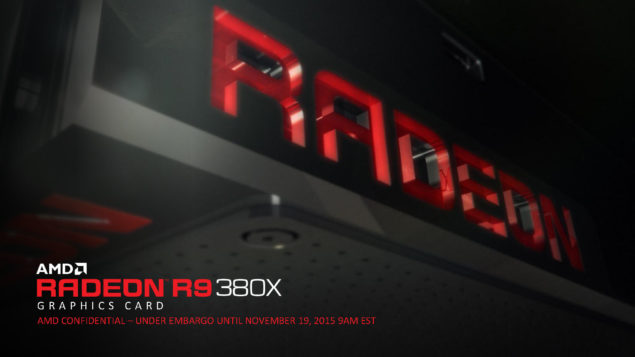 The day has finally arrived, AMD has launched the Radeon R9 380X. The much awaited card has been rumored to launch since Q3 2014 and it has finally arrived in the market in Q4 2015, a year later. Now we might have no official reason to why AMD delayed the full Tonga GPU on the desktop side for so long but one reason could be the fact that AMD didn't had the time to manufacturer enough chips to meet demand on both mobile and desk top platforms. The Tonga XT chip was first arrived on the Radeon R9 M295X discrete graphics card for the iMac (Retina 5K). A year later, this chip was rebadged with the codenamed, Radeon R9 M395X which meant that the GPU was still under some demand. As the demand gradually fell, AMD re purposed the chips to be configured within desktop grade, discrete graphics cards, now available in the form of the Radeon R9 380X. 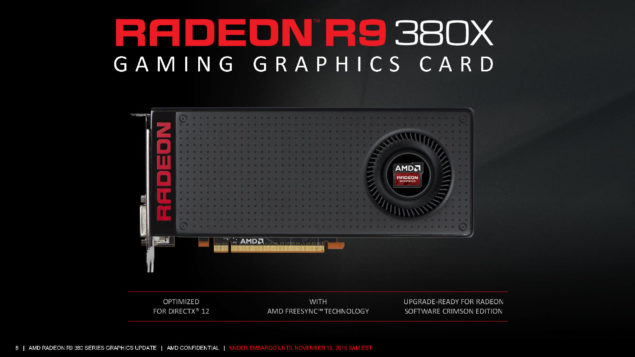 The block diagram for the Antigua XT core is a beefier version of the Antigua Pro (Tonga Pro) GPU that we have already seen. The Antigua XT GPU is comprised of four shader engines, each containing 8 compute units. These make up a total of 32 CUs, each containing 64 stream processors. The total number rounds off to 2048 SPs that are 256 shaders more than the Antigua Pro GPU. Each shader engine has 8 raster units and 32 texture mapping units (each CU contains 4 TMUs). The overall GPU has a larger L2 cache compared to Tonga Pro and comes with 8 ACE (Asynchronus Compute Engines). The GPU has four 64-bit memory controllers which provides a 256-bit bus that is still not equal to the full 384-bit bus available on Antigua. 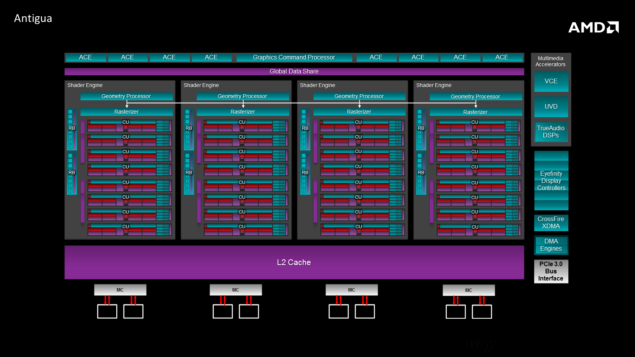 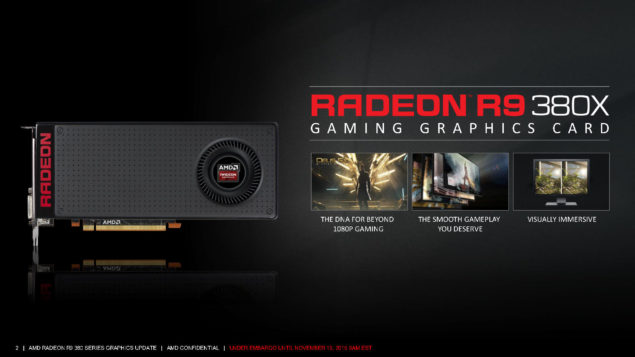 The card being based on the latest GCN 1.2 iteration which is the same GCN (Graphics Core Next) revision as the Fiji graphics core is fully compliant with features like Color Compression, Vulkan API support and DirectX 12 API support. The card packs 8 ACE units (Asynchronous Compute Engines) which allows tasks to be submitted and processed by shader units inside GPUs simultaneous and asynchronously in a multi-threaded fashion. Furthermore, the card comes with the latest XDMA CrossFire technology that allows multi-GPU functionality between one or more cards of the same kind effectively. The card will feature a TDP of 190W and power will be provided to several variants through a dual 6-Pin power input but some cards will require a 8+6 Pin power connector scheme for the beefier overclocking boards. 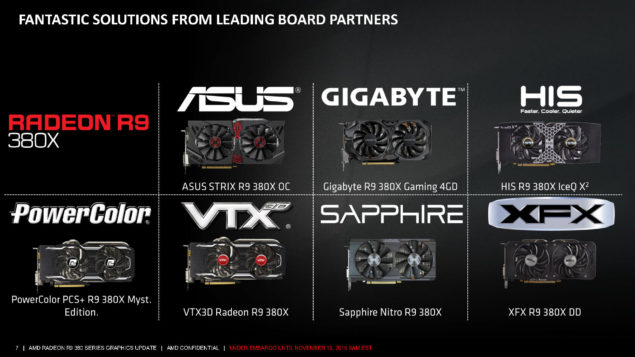 The AMD Radeon R9 380X is hitting the sweet spot of $229 US and will be directly competing against NVIDIA's GeForce GTX 960 (4 GB) cards. This confirms what we have been saying for months that the card will actually be placed in the sweet spot tier for mainstream gamers which has remain untouched by NVIDIA and AMD so far with a proper graphics solution. AMD currently has two cards near this price range, the Radeon R9 380 ($199 US) and the Radeon R9 390 ($329 US). On the NVIDIA front, we are looking at the GeForce GTX 960 ($199 US) and the GeForce GTX 970 ($299 US). Now all of these cards compete against each other well but there’s a big gap left between them. For instance, the R9 390 is much faster than a R9 380 and the same could be said when comparing a GTX 970 to the GTX 960 graphics card. The GeForce GTX 960 did get higher priced, 4 GB models but they are essentially the same card so performance remains pretty much what we see on a regular GeForce GTX 960 (2 GB).

This market is being filled up by the Radeon R9 380X at both $229 US for reference and $239+ for the custom variants which will be available at launch. This introduction might force NVIDIA to launch a GM204 based GTX card to tackle the Radeon R9 380X but for now, it seems like they have nothing to offer in this performance and price category.

It seems like AMD is directly competing against NVIDIA as they want NVIDIA’s old Kepler GPU owners to upgrade to their new R9 380X graphics card since NVIDIA didn’t brought anything interesting in this price market. In all the official benchmarks posted by AMD, it can be seen that the card is directly compared to GeForce GTX 760 and GTX 660 aside from the new GTX 960 graphics card. The GeForce GTX 660 and 760 launched back in 2012/2013 and were great cards for their performance. 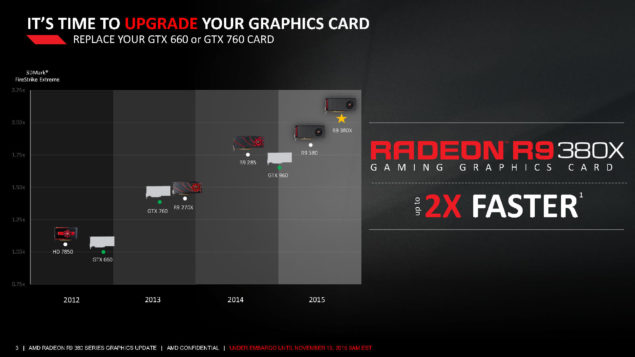 Both of these cards entered the US$ 250 market but NVIDIA didn’t introduce a new part in this market with their Maxwell lineup. The 4 GB GTX 960 offers little improvement over the 2 GB variants hence NVIDIA might launch a faster GM204 Maxwell part in this market or they would have to loose the market share to AMD till their next-generation Pascal GPU arrives, in 2016.

The Radeon R9 380X is an interesting card as it bests every card beneath it or close to it. The card is not going to compete against the $299+ graphics card and neither the sub-$200 market. It has a market of its own and the only graphics card NVIDIA has in this price range are the 4 GB models of their GeForce GTX 960 which are quite a bit slower than the Radeon R9 380X as the official AMD benchmarks put it. But from a non-official view, we can expect similar results as the Radeon R9 380X is a really beefed up graphics card with tons of graphics power available on it. The Radeon R9 380X uses the same memory compression techniques used on Maxwell architecture to conserve bandwidth but still has loads of bandwidth available for the GPU and a bigger bus interface of 256-bit compared to 128-bit bus interface. This means that the card will be able to keep up in AAA titles on higher resolution and boast better performance with added textures. AMD themselves advertise the Radeon R9 380X as a 1440P graphics card. It can run games on that resolution but most users will have to keep some settings toned down to get decent frame rates but 1080P gaming would be smooth as butter. 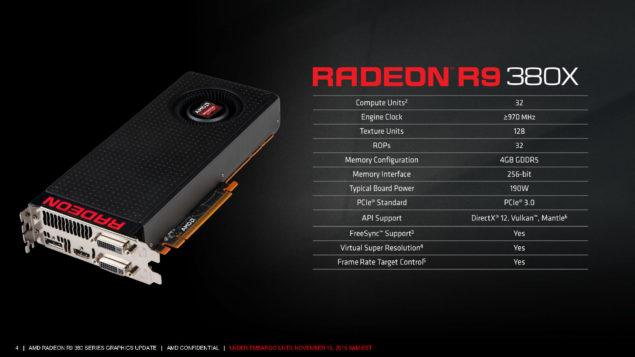