AMD's CEO Lisa Su confirmed that the company is working on several generations of CPUs to succeed Zen which are set to arrive over the next 3 to 5 years. These future CPU cores and microarchitectures were referred to by the CEO as "Zen+" and Zen follow ons. 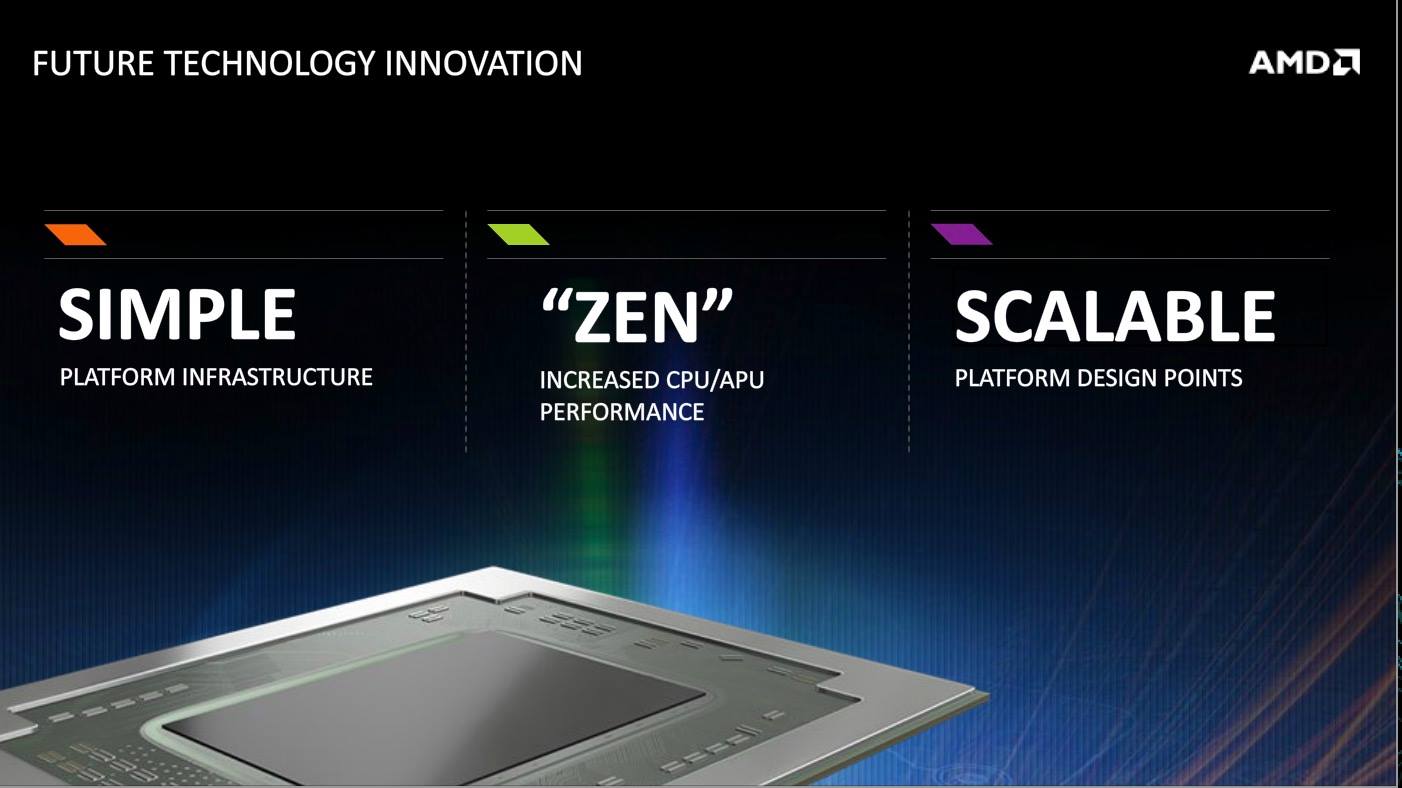 These high performance CPU offerings are meant to satisfy the needs of the market at the high-end following the introduction of the first Zen based CPU products next year. Zen is no doubt one of the most hotly anticipated AMD products announced for 2016. It signals the company’s re-engagement and re-entry into the high-end CPU segment with a brand new CPU microarchitecture following a near complete absence of participation from the company in that market for what now amounts to approximately half a decade.

AMD revealed Zen for the very first time back in May and has since emphasized it as its most crucial investment in several years. The company revealed that it plans to leverage the new CPU core in several key markets, including the enterprise, high end desktops, notebooks and mainstream desktop machines over the next several years.

We've detailed everything that's been revealed so far about Zen since then in an exclusive piece, including information about when it's is going to be released, the core's high-level microarchitectural design, its performance and the kinds of features that the new AM4 desktop platform will deliver.

Success in the datacenter/enterprise/server market hinges on several equally important criteria. Including a competitive product, robust set of features and a comprehensive long term roadmap just to name a few. AMD made sure to tick all of these boxes with Zen to make sure that its most critical investment is a successful one.

A few aspects such as the performance improvement of the new microarchitecture over the last and some of the new features that AMD will be bringing to the new platform had been touched on by the company's CEO Lisa Su earlier this year, when the new CPU core was announced at the Financial Analyst Day back in May. And no doubt taking advantage of 14nm / 16nm FinFET process technologies are going to be instrumental in that regard, but it wasn't until very recently that Su talked about the long term roadmap for Zen.

Su confirmed at the 19th Annual Technology, Media & Telecom Conference that the company is working on several generations to succeed Zen, these "Zen+" or "follow ons" will continue to drive the performance and longevity of the platform over a timespan of three to five years.

Credit Suisse 19th Annual Technology, Media & Telecom Conference
John Pitzer :
When you think about your datacenter efforts how important is Zen next year?

Lisa Su, President & CEO of AMD :
I think Zen is the first of a multi-year strategy so you know again you ask me what are my thoughts around the company I think AMD at our core we are a high performance computing company and so you know Zen is a from scratch architectural design, for those of us who do those you know it takes a lot of work. It's a multi-year effort but I think it's a multi-year effort that we can see coming to fruition. And so what datacenter customers want from us is one we want you to be competitive and two we want a long term roadmap. And so we've really talked about Zen+, Zen follow ons, as you know a three to five year view of what's needed to be successful in the datacenter.

Interestingly, AMD's Chief Technology Officier Mark Papermaster had alluded back in May to the fact that AMD's design teams are working on the successors of Zen but very little detail regarding timing had been given at the time. Papermaster stated that the next generation successor was "well under way" and that the company expects to introduce a "family of cores over time" beyond Zen.

AMD's last datacenter play with Bulldozer in 2011 only saw one follow up based on the Piledriver microarchitecture which succeeded Bulldozer in 2012. AMD did not introduce any significant update to its Piledriver chips in the datacetner or the high-end desktop since. With Zen AMD is planning to extend the lifespan of the platform by introducing several follow ons. This family of Zen & Zen+ cores are meant to keep the AM4 platform alive for three to five years until a new CPU microarchitecture is introduced to succeed this family of cores. Very much like how Zen is replacing the Bulldozer family, or how the Budllzoer family replaced the Phenom II family.

The high-end deskstop roadmaps of AMD and Intel have always been directly influenced by their server roadmaps. All of AMD's server and high-end desktop CPUs for example have been based on the same dies/chips which have been repurposed to address their respective market segments. It's an age old dynamic that's driven by the economics of chip design and manufacturing and something that AMD's Chief Financial Officer reiterated last week.

Raymond James Technology Investors Conference
Hans Mosesmann :
So Zen, the new x86-based processor, high-end it's your return potentially into the data center kind of server area. What's the timing? And what kind of share do you guys…?

Devinder Kumar, Chief Financial Officer of AMD :
Yeah, actually one of all the things that we are working on, I think that’s one of the more exciting pieces of it. Having been with AMD for a long time I’ve seen the success in past years where we had with the Opteron device going back a few years that I’m sure you are very familiar with, when we captured 25% plus market share. And then the market share eroded steadily over time and today really there’s nothing to speak about. It’s under 1%, so effectively it’s nothing...

And by the way, because we have this reuse approach for cores, you will see us with Zen cores in the high-end desktops first and then the servers from our overall products standpoint.

Zen sampling is set to start next year with initial availability by the end of 2016 and broader market reach by 2017.