AMD Ryzen 9 3950X 16 core pre-binned CPUs will become available on Silicon Lottery tomorrow, but they have been listing the processors a day earlier along with their binning statistics. The AMD Ryzen 9 3950X processor went on to become a huge hit in several markets, offering 16 cores on the mainstream platform and tackling Intel's HEDT on all fronts. There are many users who would be willing to pay extra for a golden chip that either gives them better performance straight out of the box or for overclocking purposes and this is where these pre-binned edition processors come in handy.

The AMD Ryzen 9 3950X is the flagship chip of the AM4 platform, offering an unprecedented 16 cores and 32 threads on a single package. The chip features a base clock of 3.5 GHz and a boost clock of 4.7 GHz (single core) along with 72 MB of cache, 40 PCIe Gen 4 lanes, a TDP of 105W and price of $749 US. The AMD Ryzen 9 3950X is so much popular due to its massive content creation and compute power, that it's hard to find almost anywhere with limited units available for buyers. 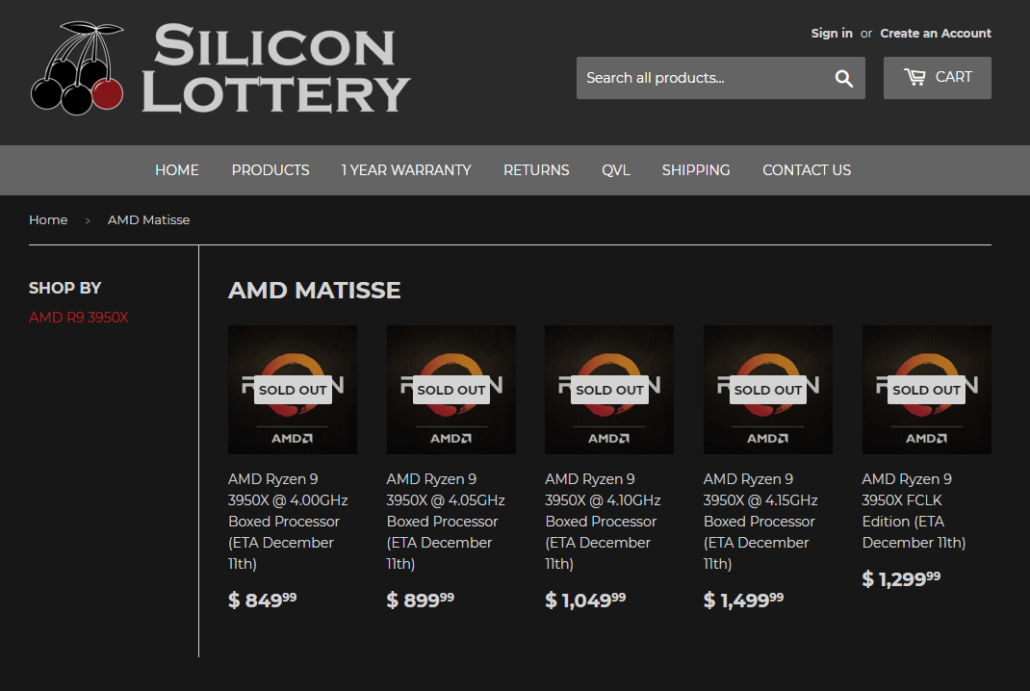 This makes it even harder to try around for a golden sample since the unit quantity is so small but if you are willing to pay the extra, Silicon Lottery has many pre-binned variants that go on shelves tomorrow. The retailer has listed 5 pre-binned variants of the Ryzen 9 3950X over at its web-page which feature up to 4.15 GHz overclocks across all 16 cores. The listed price for this variant is $1500 US, making it cost twice as much as the MSRP. Following are all the variants that are listed by Silicon Lottery:

The binning statistics for each chip have been compiled by r/AMD's subreddit user, kidwuf, which can be seen below:

The voltages are clearly under a safe limit of 1.4V and each spec has been defined by the retailer. What is most interesting here is the fact that Silicon Lottery is also selling a pre-binned FCLK Ryzen 9 3950X variant with an FCLK of 1900 MHz and an IMC of DDR4-3800.

This is more interesting of a bin considering that performance of memory and Infinity Fabric should help you more than an all-core overclock which is better off to be done per CCX rather than all-core. Regardless, considering that these chips feature better-overclocking stability in an all-core scenario, their CCX overclocks should also be better than the standard chips. You are still paying $1300 US for this chip which is $550 US more than the standard chip so there's that, but best of all, you can expect a nice golden chip in your hand.

All pre-binned variants of the Ryzen 9 3950X are expected to be available tomorrow. You will be lucky to get one as the quantity of these chips is going to be super low. The rest of the AMD Ryzen 3000 series family also has pre-binned samples available for a while now and you can see the bin statistics of those here.