The AMD Ryzen 7 5700G 8 Core Cezanne Desktop APU based on the Zen 3 core architecture has leaked out within the Geekbench database & spotted by TUM_APISAK. The leak shows us the full specifications for the said chip which will be part of the top-end Ryzen 7 5000G APUs.

Yesterday, we got to see the first benchmarks of the AMD Cezanne Ryzen 5000G Desktop APUs based on the Zen 3 core architecture. Today, the AMD Ryzen 7 5700G has leaked out too and it's also going to be part of the upcoming APU family which will be available in the mainstream CPU segment.

As per the leak, the AMD Ryzen 7 5700G APU features 8 cores and 16 threads. The CPU will offer 16 MB of L3 cache and 4 MB of L2 cache. The CPU has a base clock of 3.80 GHz but boosts all the way up to 4.66 GHz. We can't say for sure what the exact boost clock would be for AMD's Ryzen 7 5700G will be but it is already 200 MHz faster at the base frequency and should also be at least 200-250 MHz faster with its final boost clocks compared to the AMD Ryzen 7 4700G. Other specs include the AMD Radeon Graphics based on the enhanced Vega architecture with 8 CUs or 512 cores. The clock speed for the Vega GPU should also be higher than the 2.1 GHz frequency we got on Ryzen 4000G CPUs. 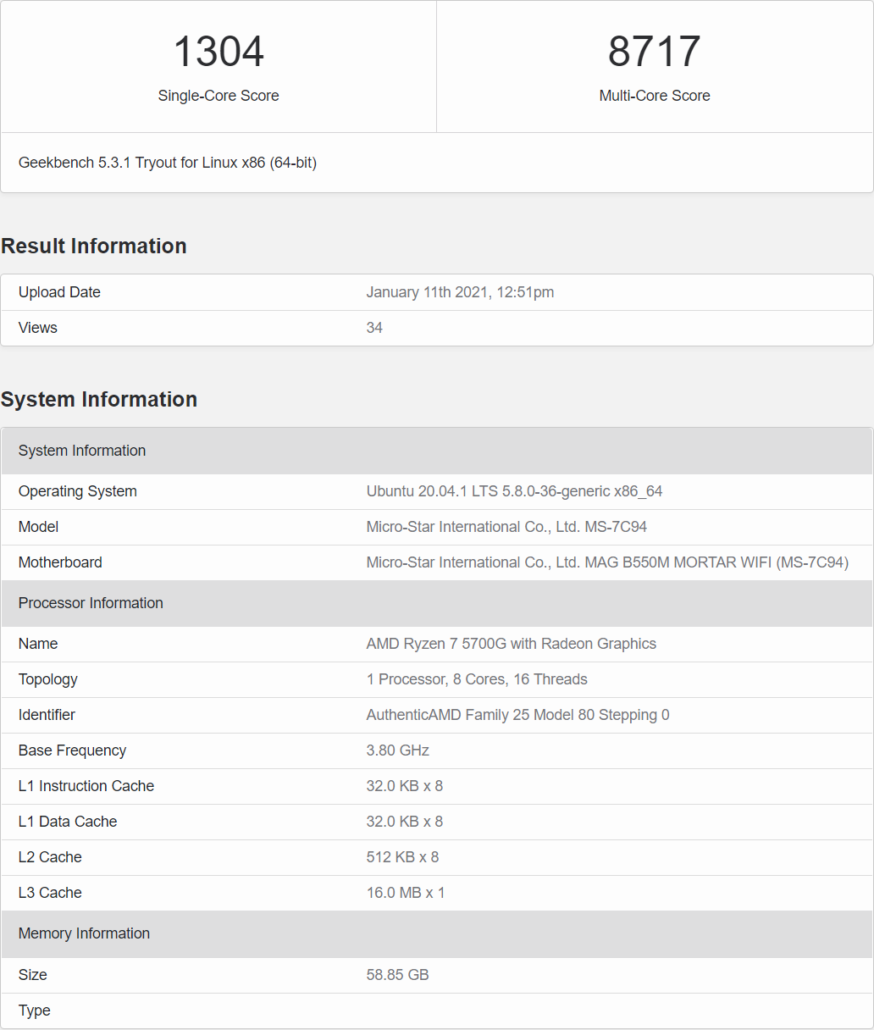 The AMD Ryzen 7 5700G Cezanne Desktop APU was tested on an MSI B550M Mortar WiFi board with 64 GB of DDR4 memory. The exact speeds are not known for the memory configuration but surprisingly, the test was done within the Ubuntu operating system. The chip scored 1304 points within the single-core and 8717 points within the multi-core tests. We can't exactly compare these results with the previous benchmarks since they were done on Windows operating systems but at the same time, scoring this much in Ubuntu should mean that the final performance for Cezanne Desktop APUs should rival the desktop Vermeer 'Ryzen 5000' CPUs which is also something we did mention yesterday.