AMD has just scored a landscape victory in the German market with the retailer MindFactory reporting that they were able to sell over 35,000 Ryzen 5000 & Ryzen 3000 CPUs while Intel's processors only managed over 5000 sales in the month of November. The detailed numbers posted by Reddit user, Ingebor, show just how big of a demand there is for AMD's Ryzen CPUs compared to Intel's offerings.

Keeping its leading position intact in the German market, AMD Ryzen CPUs based on the Zen 3 and Zen 2 architecture have decimated all previous records set by Ryzen CPUs. November not only saw a huge sales increase for AMD but also for Intel, both of which reported their highest sales figures for 2020.

AMD is obviously the brand of choice in the German market as its Ryzen 5000 CPUs based on the Zen 3 architecture and Ryzen 3000 CPUs based on the Zen 2 architecture sold 35,000 units. This is 84% of the total share for the number of CPUs sold in November while Intel which barely sold over 5000 of its 10th Gen and 9th Gen Core CPUs managed to grab a 16% share. The revenue split was also similar at 84% and 16% between AMD and Intel due to AMD's increased sales. The month also reported the best revenue figures coming from AMD CPUs which accounts for a total of 10 Million Euros while Intel CPUs managed just slightly below 2 Million Euros.

Coming to the CPU statistics, AMD's Ryzen 3000 CPUs accounted for 67% of the total CPUs sold whereas Ryzen 5000 CPUs shipped 16% units of the total sales figures. Ryzen 2000 and Ryzen 3000G CPUs also managed a cumulative sales of 17%. It looks like people are still interested in the Ryzen 3000 CPUs due to their fantastic value to performance proposition compared to the new Ryzen 5000 series lineup.

The Ryzen 3000 CPUs have been available at discounted prices for a while now and the holiday deals have made things even better for consumers. The Ryzen 5000 CPUs meanwhile did retain strong sales over the competition but ultimately, the lower stock had an impact on their sales figures.

The Ryzen 7 3800XT also managed to sell over 2300 units which are surprising given the fact that the Ryzen 3000XT series didn't offer the same price to performance value as the non-XT part but it could also be due to the fact that AMD had partially phased out its non-XT CPUs and replaced them with the XT parts so users have been running for a CPU with better supply which the XT family offers. Even the Ryzen 7 2700X sold more than the Intel Core i7-10700K, selling over 1800 units versus 1270 units for the Intel SKU. The Intel Core i9-10850K sold just 550 units which is much lower due to lower stock and the fact that the Ryzen 9 5900X and the 3900X offer much better value in this segment. 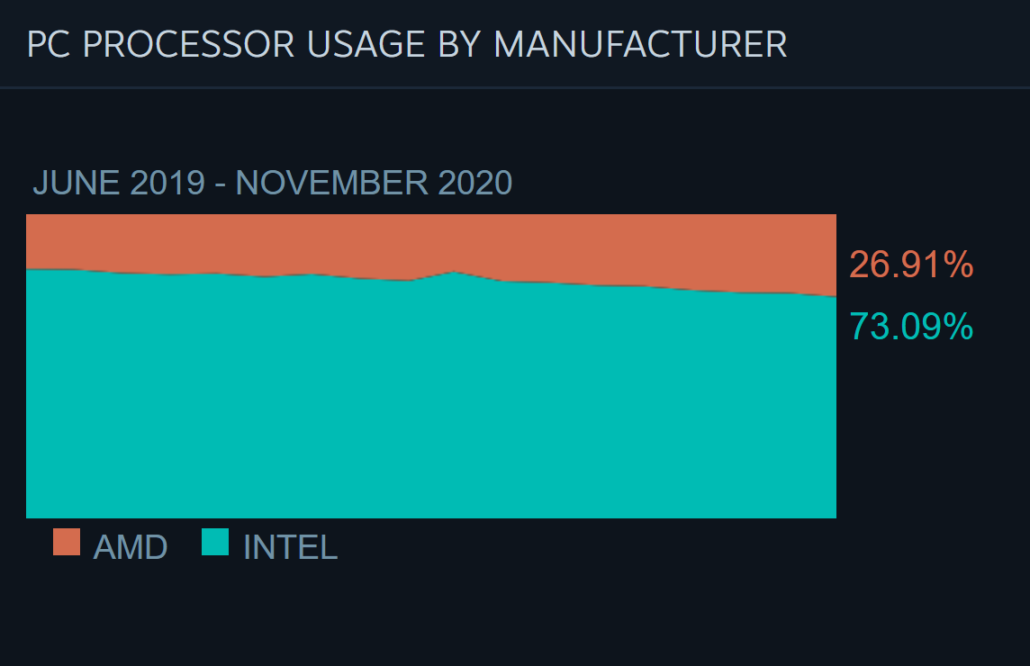 Taking our eyesight off of MindFactory and moving over to the global CPU market share, we see that AMD is quickly gaining ground in major markets. AMD's share in the Steam Hardware Survey has seen a drastic rise with AMD now sitting at 26.5% share. Intel still holds the leading position with a market share of 73.49% but at the rate, this is dropping, we expect AMD to be at around 50% market share by early 2022.

Which CPU are you running inside your PC right now?