AMD's next-generation Ryzen 5000 APUs codenamed Cezanne have once again been spotted and this time, the device ID for the said chips has been confirmed along with details of what to expect on the CPU and GPU side which will be using a mix of both new and refined technologies in form of Zen 3 and Vega.

We already know quite a bit about the Cezanne APU family which is going to power Ryzen 5000 APUs on both desktop and notebook platforms in the coming year. The Cezanne family would be replacing AMD's Renoir Ryzen 4000 APU family which has been released on notebooks since April and will make its debut on the desktop AM4 platform in the coming months.

Yesterday, Komachi was able to confirm that the AMD Cezanne APUs will fall under the 1638 Device ID and there have been at least 13 PCI IDs for the specific family spotted already by Rogame. AMD's Renoir family uses the 1636 PCI IDs while the custom low-powered Van Gogh line of APUs will use the 163F PCI IDs. 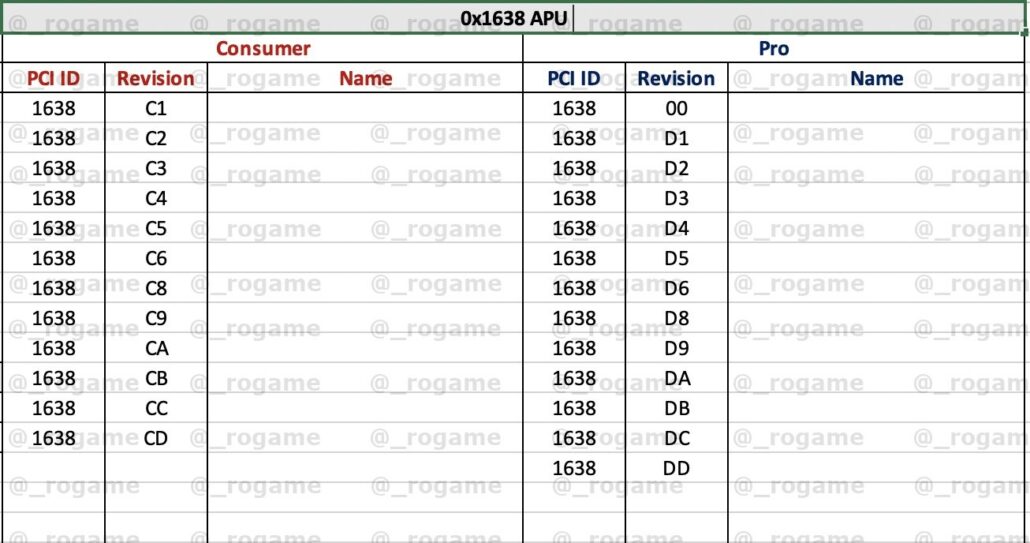 Komachi also points out that Cezanne APUs are still based on GFX9 architecture which means that we are once again going to see an enhanced version of Vega on the next-generation APUs. What's interesting is that Cezanne APUs will feature a brand new CPU core just like Renoir APUs but will do with an enhanced revision of an existing GPU core. It is also reported that the Cezanne APUs will be coming to the AM4 platform which means that the socket will last till 2021 and we can expect AMD to upgrade to AM5 around 2022. This seems very likely considering that Zen 3 'Vermeer' desktop chips are launching later this year and there will be more parts launching in 2021 to fill up the end spaces of the lineup.

We already touched on some details for Cezanne 'Ryzen 5000' APUs in our previous post but it looks like there's more information to talk about. For starters, like this year's lineup, the Cezanne family would be split into two segments for laptops, the high-performance Cezanne-H & the low-power Cezanne-U.

The processors will feature the FP6/AM4 package which is the same as the existing chips. It's a BGA platform and will definitely help laptop makers since it keeps the same design while desktop users can upgrade over from their existing processors to the new ones without requiring to change their motherboards.

The actual GPU powering the Cezanne APU is going to be an enhanced version of the existing Vega GPU which is also its most refined form to date. Previous reports said that the Cezanne APUs will be fabricated on the TSMC N7 process node. From the looks of it, the CPU side will once again be the major update while the GPU side will get similar enhancements to we saw on the refined 7nm Vega GPU on the Renoir APU family. With that said, the Zen 3 CPU cores are going to deliver a massive leap in performance per watt and efficiency over the Zen 2 architecture so that will keep audiences interested for the next-gen chip either way.

It is reported that AMD's Cezanne 'Ryzen 5000' APU lineup is expected to hit the market by 2021. We can hear an announcement at CES 2021 with launch planned around Computex 2021.