XMG recently introduced its APEX 15 line of enthusiast notebooks which are powered by the AM4 socket allowing the use of desktop-grade AMD Ryzen 3000 CPUs. We got to see some really impressive designs and XMG has shared some interesting performance metrics of how these CPUs perform compared to desktop processors from Intel in a thermally and power-constrained laptop design.

Coming to the performance benchmarks, XMG has conducted single-core, multi-core, & efficiency tests for all four chips and compared them with Intel's 9th Gen Core desktop lineup. According to the data, all AMD Ryzen 3000 CPUs feature higher performance per watt than the comparative 9th Gen Intel CPUs. The tests are based on performance ratings within the Cinebench R15 benchmark.

Let's take the AMD Ryzen 9 3950X as an example. The 16 core and 32 thread parts are phenomenal as it is but we have seen just how well performance scales with its ECO mode profile. At the stock 105W configuration, the Ryzzen 9 3950X posts a score of 215 points in single-core and 3939 points in the multi-core test. With the 65W profile, the same chip inside a laptop configuration scores 195 points in single-core and 3301 in the multi-core tests. The 105W config is 20% faster but the 65W ECO mode config offers a 34% jump in performance per watt which is perfect for a laptop design. 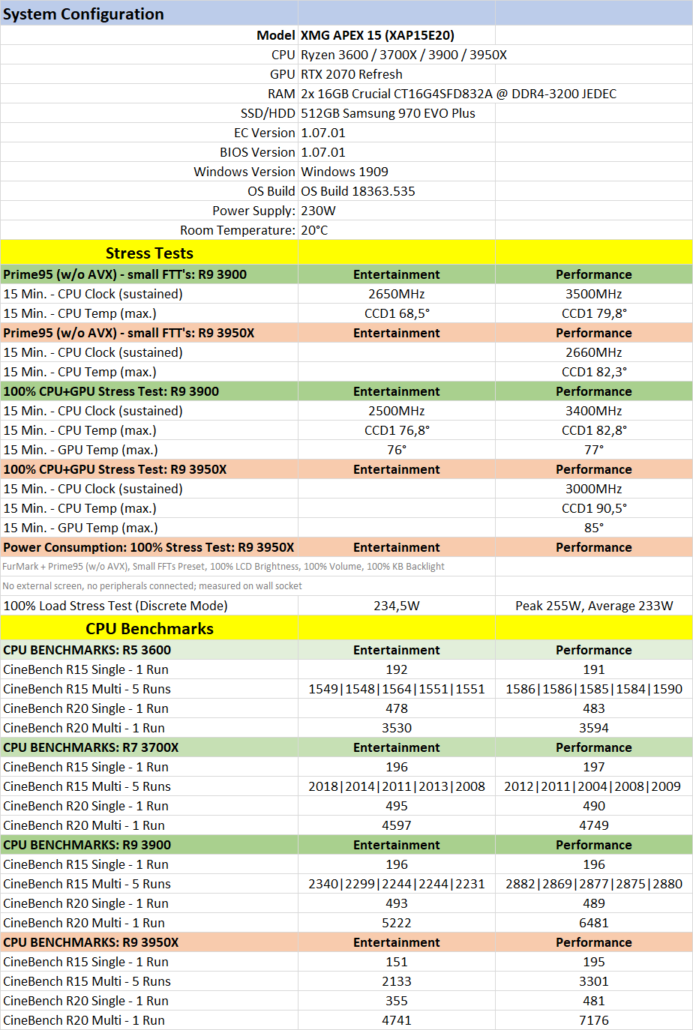 In Furmark+Prime with R9 3950X, the CPU Temperature rises to only 90°C which is still below throttling point". - XMG

XMG also posts data for power which at 100% stress test as was also the case with the thermal tests and the peak wattage is reported at 255W and 233W on average. Do note that this is the wattage for the entire laptop which includes the discrete GeForce RTX 2070 Refresh GPU and everything maxed out to 100%. This only goes off to show something that we already know and that's AMD's Ryzen 3000 CPUs and their incredible 7nm Zen 2 architecture which delivers perf/watt unlike any other desktop CPU in the market.

Last week, Der8aer managed to get hold of an XMG APEX 15 notebooks and did some incredible tests with the Ryzen 9 3950X such as cooling it with LN2. You can check more of that out in the video below:

With that said, XMG has already confirmed that they will have a BIOS ready for the B450 board featured on the APEX 15 allowing support for AMD Ryzen 4000 desktop CPUs and APUs in the future. Those who are considering getting an APEX 15 notebook or just check out the price of the various configurations that this insane notebook comes in, you can do so here.