The AMD Ryzen 3 3250U is an unreleased, unannounced APU from AMD, but a benchmark has shown up on the Geekbench database. The U in the processor name implies that this processor is designed for a mobile application like a laptop. This processor looks and feels like the already released Ryzen 3 3200U hinting that the Ryzen 3 3250U could be a custom-designed chip for a prominent manufacturer, offering a higher adjustable TDP range.

The AMD Ryzen 3250U has not been released yet and is part of the Picasso APU family which comes with the 12nm Zen+ CPU architecture and a Radeon RX Vega GPU. The Ryzen 3 3250U processor is seemingly very similar to the Ryzen 3 3200U. 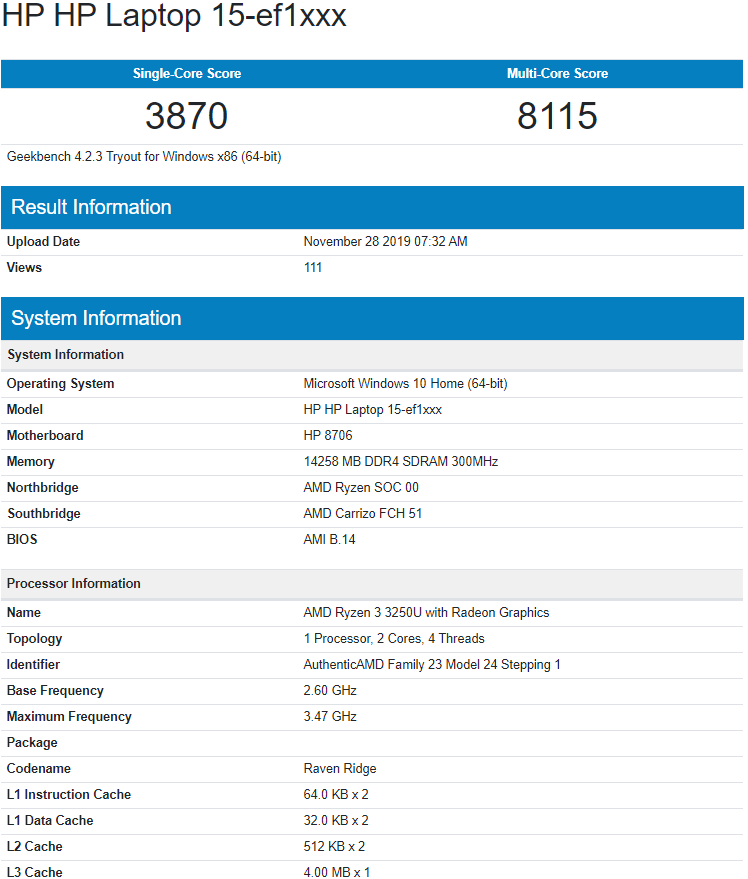 This processor seemingly uses the same dual-core and four-thread set up that the Ryzen 3 3200U featured with a base clock of 2.60 GHz and a boost clock of 3.47 GHz (rounded to 3.50 GHz). This processor uses Vega 3 for the GPU which packs 192 stream processors that run at a clock speed of 1,200 MHz. It's a fairly low-end integrated graphics design which is decent enough for productivity but expect laptops based around this chip to feature a discrete graphics solution as the Vega 3 chip may not be enough to run games or some graphics demanding workloads at their fullest.

This Ryzen processor could either be a custom-made APU for some PC vendor or potentially a new laptop processor, which could be a higher-end version of the already released Ryzen 3 3200U. Unfortunately, this won't be going on sale anytime soon, but you might be seeing this on an upcoming laptop in the future.