In case you missed it AMD's FAD event was yesterday and among the many product announcements, which we distilled here, was the Radeon RX Vega Frontier Edition. A brand new high-end graphics card based on AMD's next generation Vega architecture built for scientists, content creators and designers. Chief architect of the Radeon Technologies Group, Raja Koduri, made it very clear that if you're a gamer this card is not for you.

So then, what about gamers ? After all AMD did demonstrate Vega's impressive 4K gaming performance. That demo was certainly not targeted towards scientists or content creators, unless they like to game too. Which the Radeon RX Vega Frontier Edition is also fully capable of doing, but only at the high price that a prosumer card of this calibre demands. Well gamers, fear not Raja says. A lower-priced, gaming-optimized Radeon RX Vega graphics card is coming.

The Radeon Vega Frontier Edition graphics card is going to empower the pioneers creating the next generation of gaming experiences, but it does beg one question: Can you game on a Radeon Vega Frontier Edition?  The answer is yes, absolutely.  But because this graphics card is optimized for professional use cases (and priced accordingly), if gaming is your primary reason for buying a GPU, I’d suggest waiting just a little while longer for the lower-priced, gaming-optimized Radeon RX Vega graphics card. You’ll be glad you did.

OK, When Is This Gaming Radeon RX Vega Coming?!

If you're an AMD Radeon Fury X or Fury owner and you've been looking forward to purchasing a Vega card to pair with that brand new 4K or high refresh rate 2560x1440 FreeSync monitor you bought then this wait most certainly can be frustrating.

We're coming up on the Fury series' two year anniversary soon and the Radeon RX Vega Frontier Edition is not coming out until late June. AMD announced that the Frontier Edition will be the first Vega based card they're going to release and based on Raja's statement, you'll have to wait "a little while longer" for the gaming oriented Radeon RX Vega. At this point we'd be looking at a Q3 2017 launch for the gaming Vega parts.

There's no doubt that Raja and his team are doing all they can to get Vega out the door, so what exactly is behind the delay? Thankfully a piece of information that has come out very recently means that we can do more than just speculate. I'm referring to SK Hynix's latest update to its product databook which they issued earlier this week.

Is This Technically A Delay? If So What's Causing It?

Before we get into the particular piece of information of relevance to Vega from Hynix's updated databook we should take a look back at what happened two years ago when HBM was first introduced.

First generation HBM faced production challenges that limited supply early in its lifecycle. This shortage led to market instability, because demand had vastly exceeded supply. This prompted retailers to raise prices on AMD's then newly introduced Fury series cards. At one point the Fury X was selling for nearly 40% more than its official MSRP.

We're now seeing evidence that HBM2 is behind schedule, significantly so. Hynix updates its product databook on a quarterly basis. HBM2 first made an appearance in the company's product catalog back in Q3 2016.

Hynix originally planned to ship HBM2 in Q3 2016 but it was pushed back a quarter in every update since then.  The company initially planned to introduce two HBM2 products, rated at 2.0Gbps and 1.6Gbps. Over time, the 2.0Gbps product was ostensibly scrapped in favor of the slower memory, likely because of yield/cost challenges.

According to the latest update from Hynix, HBM2 is still not available right now but is expected to begin shipping some time in Q2 2017. Memory products that Hynix is shipping right now are marked "Now" under the availability column. Products not currently shipping have a quarterly based estimated shipping time-frame instead. This is is why HBM2's availability is stated as "Q2'17" rather than "Now" 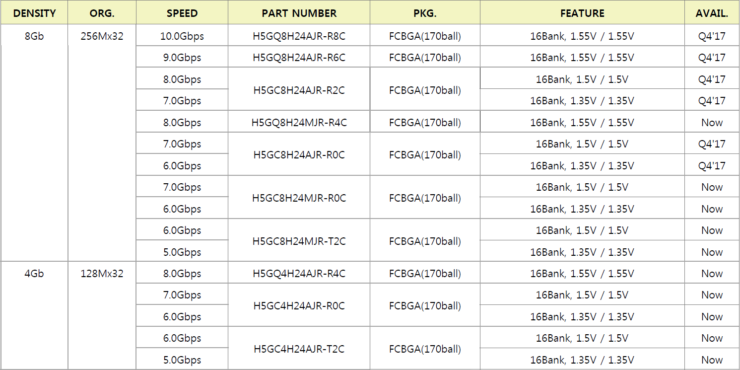 This certainly explains why the Radeon RX Vega Frontier Edition isn't coming until late June. Without Hynix shipping the memory AMD simply can't make the Vega cards that it so desperately wants to make. At least not in commercially viable quantities. This again could reasonably explain why the company is leading its Vega launch with a high cost, low volume professional workloads oriented product rather than a gaming product as it had traditionally done in the past.

AMD has always officially maintained that Vega would be a first half of 2017 product. In its Q1 2017 earnings release it updated Vega timing to Q2 2017 which is still H1 2017, just more specific. Although knowing that Hynix had originally intended to ship HBM2 in Q3 of last year indicates that AMD had also planned to ship Vega in late 2016. So while technically Vega isn't delayed, realistically speaking the 9 month HBM2 delay would have had an impact.

We're certainly not suggesting that 2015'esque shortages will happen again with Vega, as we simply do not know. Although under the current circumstances it's quite clear why gamers will have to wait a little while longer for Vega.

What Gaming Radeon RX Vega Graphics Cards Could Look Like

Before we bring this article to a close we wanted to share something fun. VCZ published some Radeon RX Vega color combination concepts -- Photoshopped -- for what the gaming oriented Radeon RX Vega could look like. The results were pretty cool which inspired us to try our hand at making some of our own Wccftech Vega editions. So please enjoy, and don't forget to tell us which ones you liked best!

Which Vega Color/Combo Do You Like Best? - Shroud Color / LED Lighting