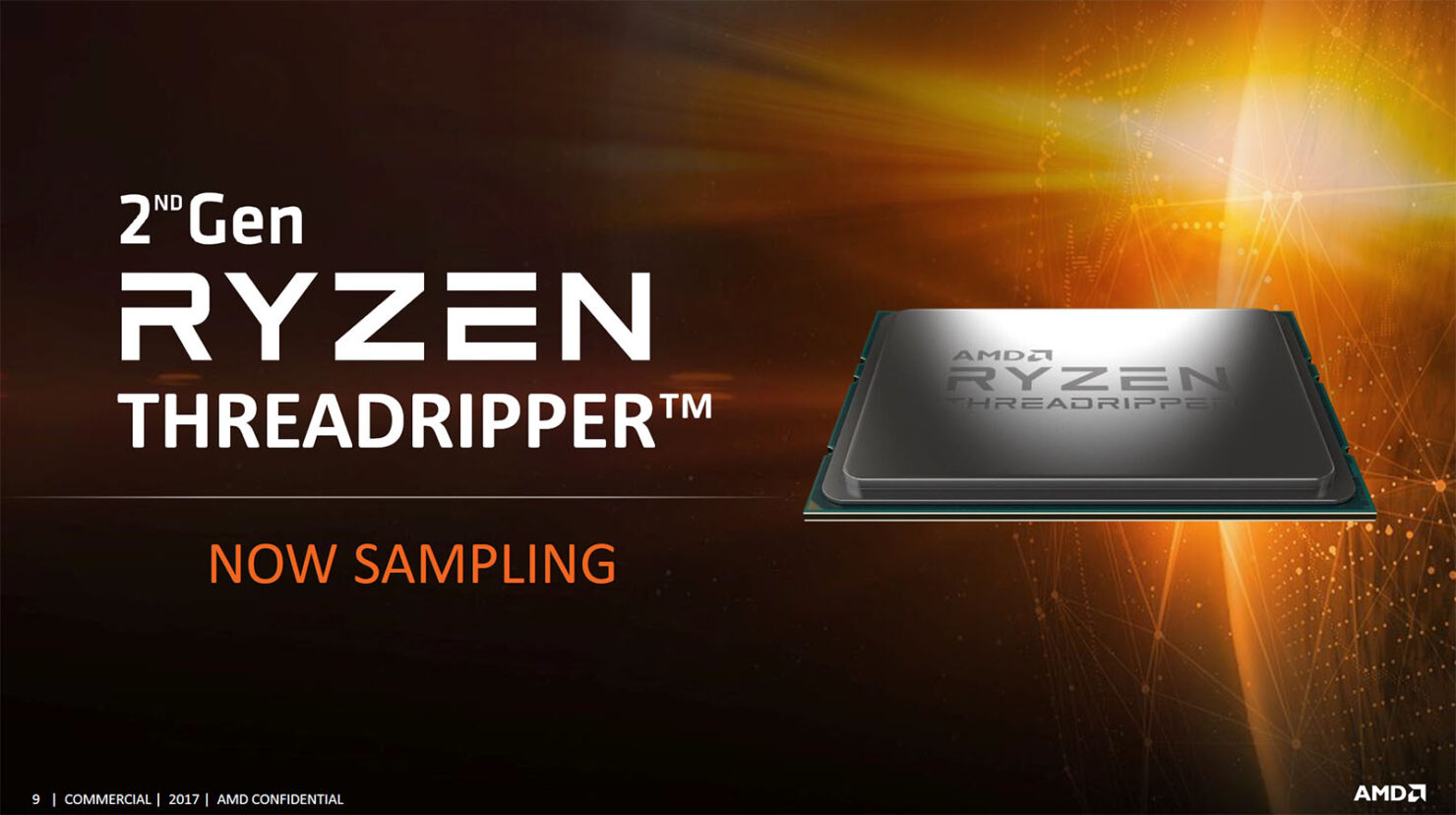 Today AMD announced the adoption of it's Ryzen Pro Processors by OEMs and it's second generation Threadripper CPUs for the HEDT platform. Starting with the news on Threadripper, the lineup will receive a update with a new line of processors using the 12nm fabrication process which will hopefully allow better power efficiency while still increasing overall core frequency as seen on the Ryzen 2700X.

Ryzen Threadripper 2000 Series To Be Released Later This Year

Those looking to pick one up soon may be waiting for a while since while it IS being sampled to partners now it isn't ready for prime time and we should expect a Q3 launch just in time for its 1 year anniversary continuing the year to year refresh cycle. Clock speeds or any other information was not announced which is probably due to the SKUs not being finalized. In other news AMD also talked about its Ryzen Pro 2000 announcement in a press release earlier today.

Dell, HP and Lenovo will soon begin offering AMD Ryzen PRO mobile and desktop APUs with Radeon Vega graphics (Vega 6 to 11) for a large variety of commercial systems. With Enterprise in mind both the Ryzen PRO mobile and desktop APUs can provide security, reliability and performance to fill the needs of today's compute focused enterprise workloads.

"Our mission with AMD Ryzen processors is to deliver more performance, features, and choice to users. We've fulfilled this promise over the last year across the premium consumer desktop and notebook markets. Now, we bring those same principles to a full range of commercial notebooks and desktops, the new enterprise platforms introduced by Dell, HP and Lenovo mark an important milestone for AMD, demonstrating that we are addressing the needs of the premium commercial market from top-to-bottom. Ryzen PRO mobile processors can enable all-day battery life up to 16 hours of use, world-class productivity performance, and sensational graphics built on Radeon technology."

Ryzen PRO processors are designed to meet the fast-changing requirements of today’s business PC users, including both commercial workloads and rich multimedia capabilities that are becoming more typical as the traditional boundaries between work and personal computing merge. Offering desktop-class performance in an ultrathin notebook, the AMD Ryzen™ 7 PRO 2700U offers more system performance than the competition

“HP is redefining the commercial PC experience as the traditional boundaries between work and life blend. Our latest offerings with AMD Ryzen PRO processors integrate powerful processing and graphics into innovative solutions built with a focus on design, security, and collaboration to power the modern workforce.”

“For more than 25 years, the ThinkPad brand has been defined by simplicity, function, and reliability. And as the digital transformation advances with exponential speed, Lenovo maintains a relentless quest to deliver a no-compromise customer experience,” said Jerry Paradise, vice president, Lenovo global commercial portfolio & product management. “Expanding that portfolio to include the latest Ryzen PRO processors in our ThinkPad A series notebooks and ThinkCentre M715q & M725s desktops helps us to further support our enterprise customers and their ever-evolving business requirements.”

Pricing was not available at this time but we can assume that these should be quite competitive with the competition due to AMDs lower pricing currently.