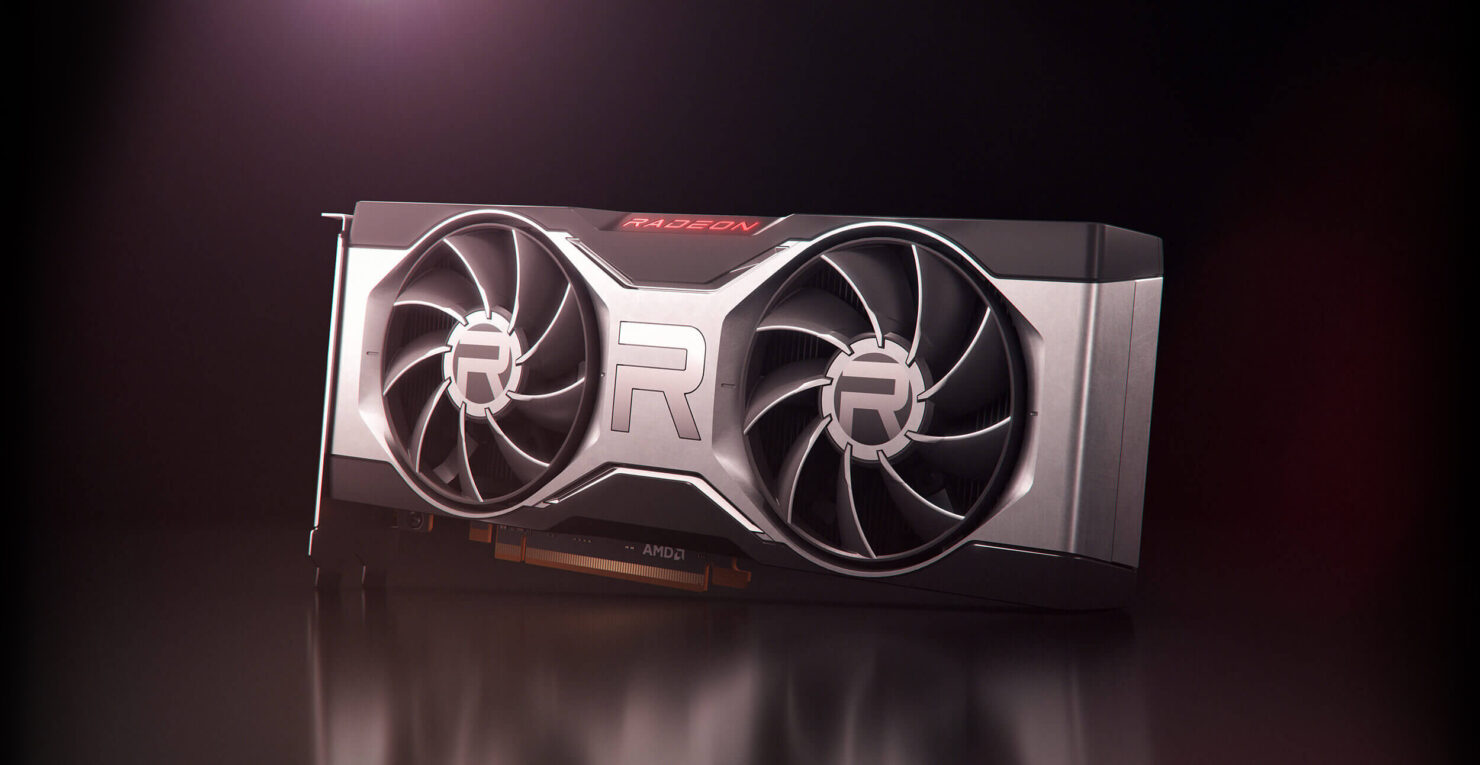 Yesterday, AMD fully unveiled its Radeon RX 6700 XT graphics card which is all set to launch on the 18th of March for a price of $479 US. The graphics card will be available in both reference & custom flavors at launch and while we focused on the reference design yesterday, our focus for today will be the custom lineup.

I think we all know by now that the $479 US pricing for the Radeon RX 6700 XT will be hard to find at launch. AMD has stated that they are working to provide the card with better availability versus its Big Navi GPU brothers which are still scarcely available and priced ridiculously above their stock MSRPs.

So one can expect the custom models to start well over $500 US and go up with the more premium designs. We can even expect prices north of $600 US. With that said, let's take a look at some of the custom models that various AIBs will be offering. Do note that some AIBs have still not unveiled the custom models so we will be updating this post in the future as those models hit the street.

ASUS has three AMD Radeon RX 6700 XT Custom models in the work which include its flagship ROG STRIX, TUF Gaming, and Dual variants. The ROG STRIX Radeon RX 6700 XT Gaming OC, being the top-variant, features a triple-slot & triple-fan design and features the Radeon badges over the main shroud.

The new ROG STRIX cooler is well-made and delivers some exceptional cooling performance. The card also makes use of a PCB that is custom in design and comes with RGB LEDs & a nice backplate that has a cut-out to let air pass through. The card is powered by dual 8-pin connectors. The card has all the bells and whistles you can expect from a top design but as such, you should also expect to be paying a hefty premium for it.

This is followed by the Radeon RX 6700 XT TUF Gaming OC variant which comes with a 2.9 slot and triple-fan design. The card features the TUF Gaming aesthetic with brushed metallic colors and the TUF Gaming logo on the side skirt. The backplate and cooler extend the length of the custom PCB & feature dual 8-pin connectors to boot. The cooler on the card features triple axial-tech-based fans.

Lastly, we have the ASUS Radeon RX 6700 XT Dual which is a 2.7 slot and dual-fan design. This card is designed for microATX and Mini-ITX cases. The card features dual axial-tech-based fans and has a nice and simpler aesthetic but still comes with RGB LEDs on the front shroud. There's a backplate that covers the entire PCB and the card is powered by an 8+6 pin connector configuration. There's also dual BIOS mode on the card (just like the rest of the ASUS RX 6700 XT models) which lets you switch between Performance and Quiet mode. ASUS hasn't announced the pricing or clock speeds yet but they will be available on the 18th of March.

MSI has prepped up five models out of which four are custom variants & one is a reference design. The custom variants are split between two Gaming and two MECH models. Both come with stock & overclocked flavors.

The top variant is the MSI Radeon RX 6700 XT Gaming X which features a 2.5 slot design and a dual-fan cooler featuring Twin Frozr 8 with Torx 4.0 fans. The card features a very nice aesthetic and is a little on the wider side. The Twin Frozr 8 shroud comes with RGB LEDs which is a design similar to the one used on the latest Tri Frozr cards. The card also features a nice backplate that goes along well with the whole theme. Both MSI variants are powered by dual 8-pin connectors & feature the standard display outputs of triple DisplayPort 1.4 and a single HDMI 2.1 ports.

Moving over to the MSI Radeon RX 6700 XT MECH 2X model, we see another 2.3 slot design that features dual-fan cooling. The shroud looks great with its silver-colored accent and there are two fans that incorporate the Torx Fan 3.0 design. The card also comes with a backplate and features an 8+6 pin connector configuration. The MECH 2X models also come in both stock & overclocked offerings and feature a custom PCB design that's slightly toned down compared to the Gaming X model.

MSI also has a reference MSI Radeon RX 6700 XT that will stick with the stock clocks and cooling scheme which we talked about in detail over here. The reference card is expected to hit retail at $479 US while the custom models will cost a premium.

Gigabyte has announced two models, both of which are part of its standard Gaming lineup. That suggests that the more premium AORUS variants will be introduced at a later date. For now, PC gamers can get Gigabyte Radeon RX 6700 XT in reference, gaming, or eagle variants.

The top model of the Gigabyte lineup is the Radeon RX 6700 XT Gaming OC. The variant features the 2.5 slot and triple-fan Windforce 3X cooling design. The fans feature an alternate spin mode that allows pushing more air towards the internal heatsink that is made up of three aluminum finned blocks and connected through several copper heat pipes. The heat pipes make direct GPU contact while the extended heatsink and backplate design allow air to be pushed out efficiently. The card comes with a custom PCB design and features an 8+6 pin connector configuration.

The Gigabyte Radeon RX 6700 XT Eagle is a more standard triple-fan custom graphics card that retains a dual-slot footprint. It features a slightly toned-down version of the WindForce 3X cooler and comes with alternate fan-spin technology. The heatsink comes with a large aluminum fin array that is connected by three copper heat pipes that make direct contact with the GPU. The backplate has a cut down to vent out hot air from the back. The Eagle model comes with a custom PCB and uses a graphene nano lubricant for the thermal interface between the GPU and the heatsink. It is also powered by an 8+6 pin connector configuration.

Gigabyte also has a reference Gigabyte Radeon RX 6700 XT that will stick with the stock clocks & cooling scheme which we talked about in detail over here. The reference card is expected to hit retail at $479 US while the custom models will cost a premium.

AMD's exclusive AIB partners which include ASRock, PowerColor, Sapphire, XFX, and Yeston are also working on their own custom models which are yet to be listed by them. In yesterday's unveiling, AMD teased a few upcoming variants from each respective manufacturer. 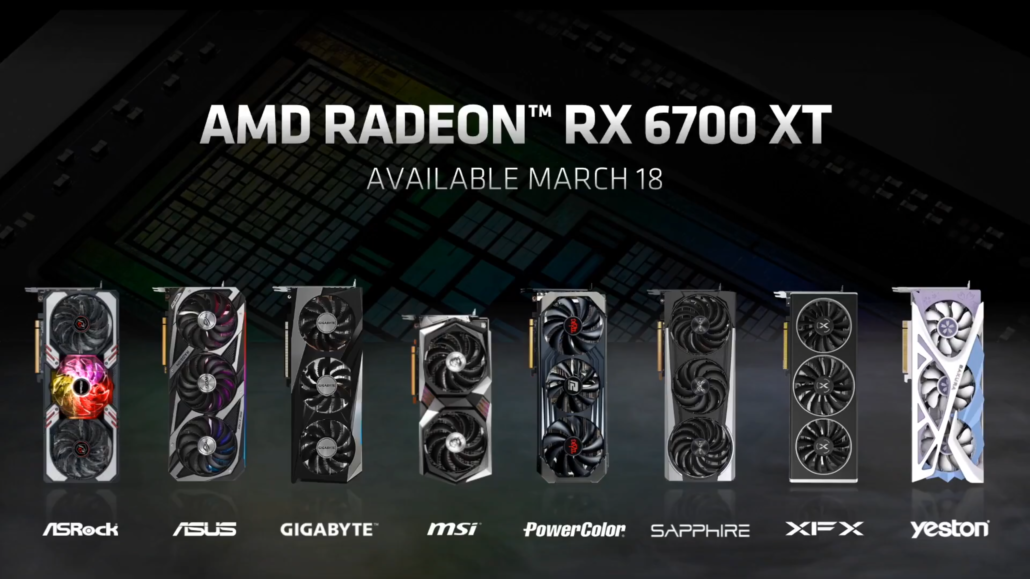 ASRock is working on its Radeon RX 6700 XT Phantom Gaming OC, PowerColor is working on its Red Dragon and the recently teased Hellbound series cards, Sapphire will be offering its PULSE and NITRO series variants, XFX will introduce its MERC 319 Speedster while Yeston's card will be the one that stands out from the rest which is its SAKURA variant that will come with a white-colored PCB and an anime-inspired design.