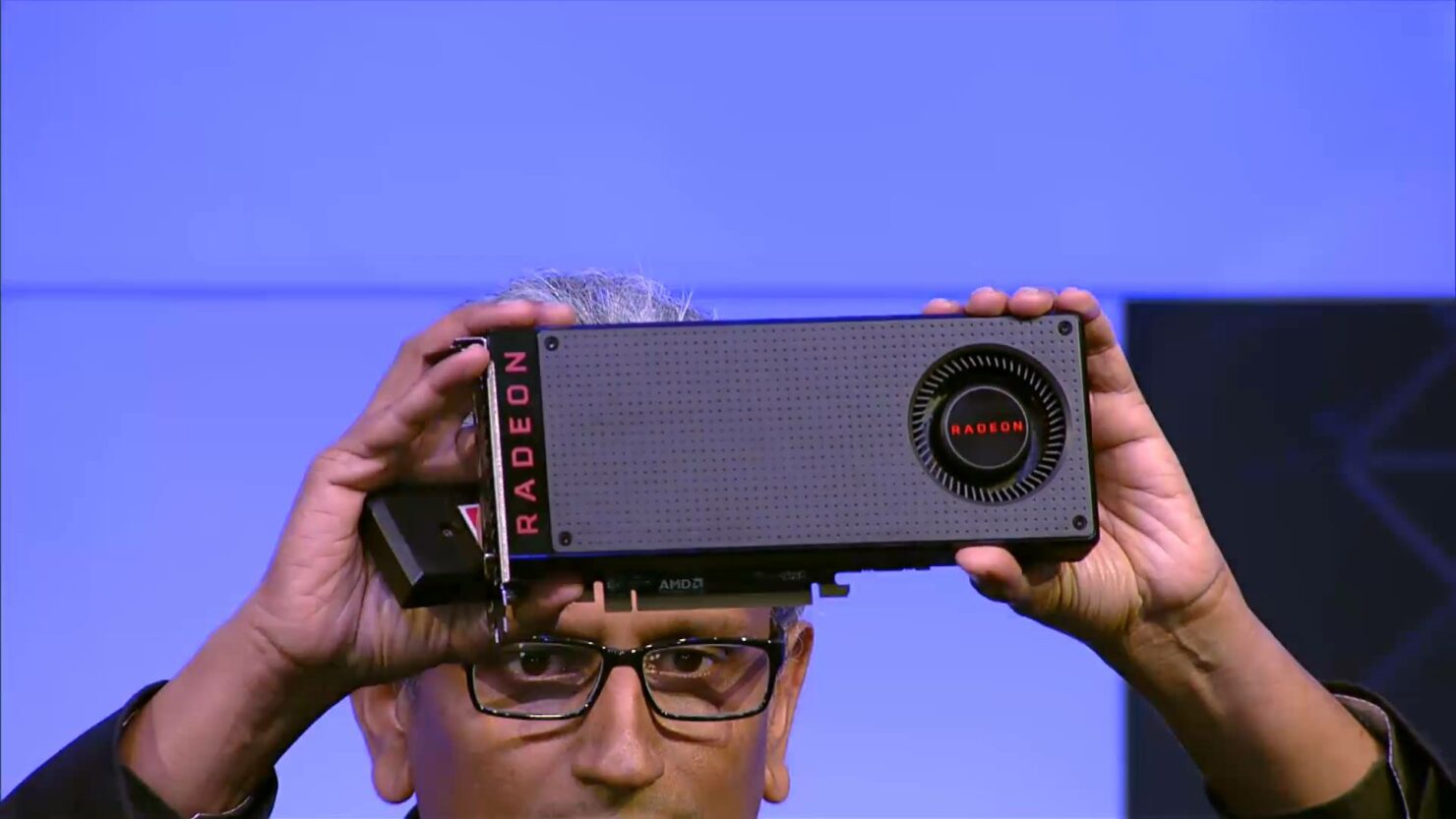 AMD has officially announced their next generation Radeon RX 480 series graphics cards based on the Polaris 10 GPU architecture. The Radeon RX 480 series cards will feature AMD's first GPUs designed with the industry leading 14nm FinFET process technology that delivers a leap jump in transistor density and performance per watt efficiency in upcoming products. The Radeon RX 480 is aimed at the mainstream market at a competitive price point which is truly a surprise from AMD.

AMD's Radeon RX 480 graphics card has went and gone a long path to finally get announced today. The graphics card is everything that AMD had promised, a great VR and AAA gaming solution for the mainstream market with a sweet value. Such sweet is the value that even we are shocked by the low price point of this graphics card which is truly fantastic news for gamers who aim to get better performance without hurting their wallets too much. 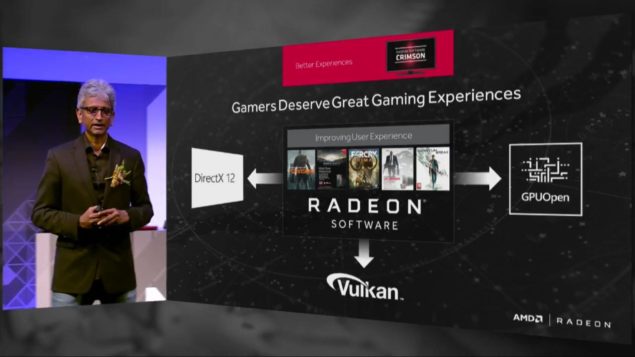 The AMD Radeon RX 480 series is based on AMD's latest FinFET designed graphics chip which we have come to know as Polaris 10. This little chip has an even smaller brother which have talked about over here but Polaris 10 is indeed a really small chip given the performance it packs. We will be comparing the specifications in a bit but it should be mentioned that AMD has really managed to pump up their efficiency numbers by a great margin so we are really glad to look at some great designs coming in from AMD in the graphics industry.

“The Radeon™ RX series efficiency is driven by major architectural improvements and the industry’s first 14nm FinFET process technology for discrete GPUs, and could mark an important inflection point in the growth of virtual reality,” said Patrick Moorhead, principal analyst, Moor Insights & Strategy. “By lowering the cost of ownership and increasing the VR TAM, Radeon RX Series has the potential to propel VR-ready systems into retail in higher volumes, drive new levels of VR content investment, and even drive down the cost of VR headsets.” via AMD

In a notable market survey, price was a leading barrier to adoption of VR.2 The $199 starting SEP for select Radeon RX Series GPUs is an integral part of AMD’s strategy to dramatically accelerate VR adoption and unleash the VR software ecosystem. AMD expects that its aggressive pricing will jumpstart the growth of the PC VR TAM and accelerate the rate at which VR headsets drop in price:

The AMD Polaris GPUs are based on the latest GCN 4.0 architecture which makes use of the FinFET architecture to deliver low power consumption, lesser voltage leak and better performance. AMD deploys a completely new architecture for Polaris chips with enhanced features listed below: 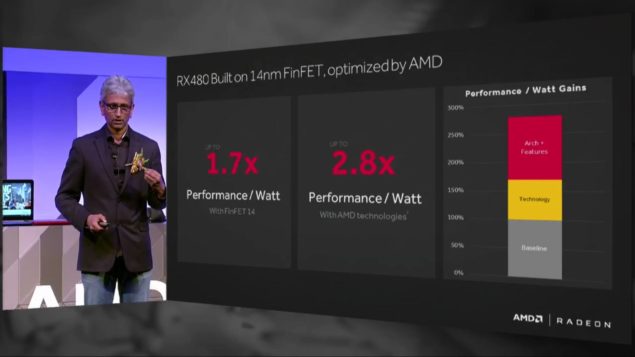 The Polaris 10 graphics chip delivers up to 1.7X performance per watt increase thanks to the FinFET architecture while AMD exclusive technologies will help drive this efficiency up to 2.8x which is amazing.

In addition to the foundation of AMD’s current generation GCN architecture, 4th generation GCN introduces new features. One notable new feature is primitive discard acceleration, which in no certain terms is AMD’s way of revealing that its upcoming GPUs will add support for additional key DirectX12 features such as Conservative Rasterization.

Furthermore, this list does a great job of showcasing just how advanced modern GPUs have become. Instruction pre-fetch is a technology that’s long been employed in CPUs and it works to improve performance by reducing stalls and unnecessary wait times. So it’s quire remarkable that this technology is now part of modern graphics engines. Which really goes to show just how complex these beasts have become.

The majority of the IP blocks in the graphics engine are new. Including a memory controller, for upcoming memory technologies, in addition to more capable and more power efficient compute units and geometry engine. The level 2 cache and the command processor have also been updated. Beyond what AMD detailed above about the key features and the display/multimedia updates the company did not go into much detail about what exactly went into these new IP blocks.

Now that we have learned about the Polaris 10 GPU itself, let's head over to the RX 480 which is using this GPU under its hood. The Radeon RX 480 features the fourth generation GCN design with 2304 Stream Processors on a clock speed of 1266 MHz. The Radeon RX 480 graphics card is capable of delivering up to 5.5 TFLOPs of compute performance which is impressive considering the Radeon R9 390X delivers 400 GFLOPs more while consuming much more power (275W vs 150 W). 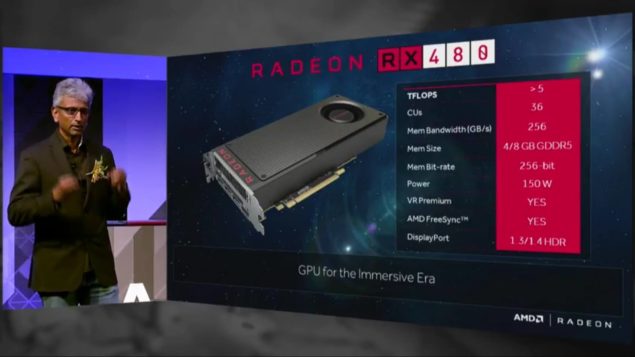 The card comes with a sweet 150W TDP while delivering high performance which is all due to the FinFET node. This allows the card to be powered by a single 6-Pin connector that keeps the card running cool and quiet. The new cooler design is same as the Radeon R9 380 along with some minor updates such as the glossy label while the logo itself is the latest Radeon version that AMD RTG has started using. Display connectors include three DP 1.4 and a single HDMI 2.0 port.

AMD showed off a graphics demonstration of their Radeon RX 480 graphics card running in CrossFire setup. The solution was compared against a GeForce GTX 1080 ($599 US) graphics card and delivered much better graphics performance however we noted that the Radeon R9 480X demo was clearly running at different settings versus the NVIDIA solution so we wait to find our more information about the settings used.

The AMD Radeon RX 480 is expected to feature graphics performance levels between the GeForce GTX 970 and GeForce GTX 980 graphics card so we can expect some decent numbers from this cost effective solution. AMD really did a great job at developing this product to bring more gamers on the PC platform which offers higher performance compared to current generation consoles.

The AMD Radeon RX 480 graphics card will be available to gamers to purchase later this month at a price of $199 US for the 4 GB and $229 US for the 8 GB variants. We will keep updating the article as more information arrives from the press conference.