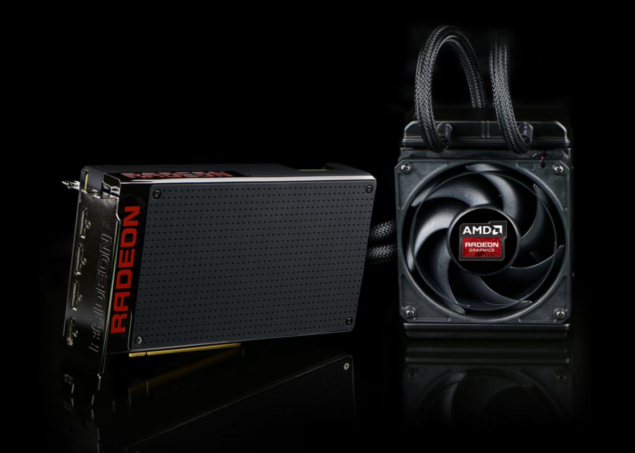 Let's start off this post with an introduction to Fiji GPU. The AMD Fiji GPU is based on a 28nm process and is the single largest chip AMD has ever produced. The chip which measures around 596mm2 has a total of 8.9 Billion transistors crammed under its hood which means a whole lot of performance and the card really does deliver a amazing amount of improvement in performance and efficiency over previous generation GPUs. Compared to Hawaii with its 6.3 billion transistors and 5.6 TFlops of performance, the Fiji GPU crunches out 8.6 TFlops of gpu performance from the depths of its heart. Also comapred to Hawaii, AMD has managed to deliver several Micro architecture improvements along with enhanced power management features and a totally refocused look at board designs. The Fiji XT GPU alone deliver 1.5 times the performance per watt over Hawaii XT. The whole die measures a massive 1011mm2 while the interposer is designed with a 65nm process. The chip may be big but the space it saves from HBM as you'll learn below transforms graphics cards into smaller and powerful designs.

The second great thing about the Fiji GPU is that cards based on the chip are also the first to incorporate the HBM memory standard. High-Bandwidth Memory or HBM in short is the latest memory standard which will be replacing GDDR5 memory in graphics cards soon. AMD is the first graphics maker to have cards that utilize the new standard out in the market. The HBM 1 chips which are 35mm2 in size are fused on the same package as the GPU die. These chips feature 1 Gbps memory speed and are capable to deliver up to 512 GB/s bandwidth. Each chip has a 1024-bit bus and the great thing about HBM is that it saves massive coverage area compared to GDDR5 chips which leads to interesting PCB designs such as the Radeon R9 Fury X, the Radeon R9 Fury X2 and the Radeon R9 Nano.

Is 4 GB HBM going to be enough for gaming?

After the event, an AMD representative gave a brief answer to whether the 4 GB HBM will be enough to run games on resolutions beyond 4K. You can find the video and the audio log below:

"We optimize our game performance so we don't see any limitation at all on 4K with 4 GB HBM. Even further to that, we know when Mantle came out, no one really had the benchmarks for Mantle because it was new to the industry, right? and then the draw calls when the benchmark came out, it was the coolest shit, right?

Umm, so I think what you are going to see now as the industry moves forward with HBM, people are going to start thinking about memory management a lot more different. Before your GDDR5 memory was just kind of like its own trash can. It just put stuff there and no one really thought about optimizing, like on the CPU side there's a lot more memory management, you know back and forth for different work loads. So I think with HBM there will be this really wide, ultra-bandwidth bus, its going to change how people utilize memory resources and its going to improve overtime with DIrectX 12 and Vulkan APIs and you'll get to see more HBM optimizations in gaming and applications."

With the main bits discussed, its now time to get to know the engineering marvel that is made using the Fiji GPU. The Radeon R9 Fury X is the fastest card AMD has ever built. It's also the smallest flagship card ever built too with a liquid cooling design which we will be detailing below. 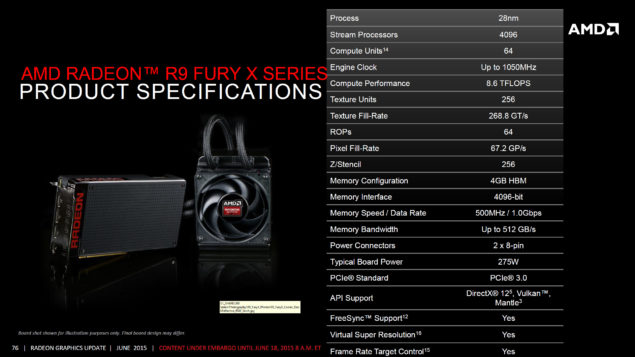 The Radeon R9 Fury X is a very powerful card, it is based on the 28nm process which has gotten old but is now matured enough to be used to designed the ultimate GPUs (GM200 / Fiji XT). The Radeon R9 Fury X comes with 64 compute units which pack 64 stream processors each, total of these amount to 4096 stream processors, 64 Raster operation units and 256 texture mapping units. The engine clock for the Radeon R9 Fury X is maintained at 1050 MHz while the texture fill rate is rated at 268.8 GT/s and 67.2 GP/s Pixel Fill rate. The card churns out a total of 8.6 TFlops of compute performance. The card also features 4 GB of HBM VRAM that is clocked at a 500 MHz (1.0 Gbps data rate). The memory runs across a 4096-bit bus interface has has a bandwidth of up to 512 GB/s. The card is powered by dual 8-Pin connectors and has a board power of 275W. Display outputs include HDMI 1.2 and three display port connectors. The card has support for next generation APIs such as DirectX 12 and supports Freesync, VSR and Frame Rate Target Control.

Now it's time to focus on the design of this beast. The Radeon R9 Fury X is a beautiful card, its PCB measure 7.5 inches which is 30% shorter than the Radeon R9 290X and has a cool and quite operation with the AIO liquid cooler. The card operates at a low 32 dBA and has a average temperature of around just 50C. The shroud itself is made of a multi-piece aluminum die-cast while the front is textures with black-soft-touch pattern. The same pattern is on the sides of the card and can even be found on other Radeon 300 series cards. The card also has a black nickel aluminum mirror gloss finished exoskeleton.

There are some neat tricks added by AMD such as LED illumination and the card can actually lit up in several other colors as user prefers. We get a dual bios switch on the sides while the PCB itself is a powerful 6 phase powered design with 400A power delivery meant for overclocking. The card is cooled down the a 120mm AIO radiator which has tubes with length of 400mm that makes the card easily adjustable in any case. The coolant pump adopts a new working methodology. A coolant inlet pipe transfers the coolant into the water block itself that cools off the entire chip along with the HBM memory. The same inlet has a copper heatpipe in the center to cool off the VRMs. A second pipe runs off from the other side to dissipate heat. On the back of the card, we get a nice backplate that covers the other side of the PCB. Also on the PCB, below the power connectors are 8 LEDs that indicate GPU intensity level and are configurable in red or blue colors. A single green LED indicates when AMD's ZeroCore Power mode is initiated. 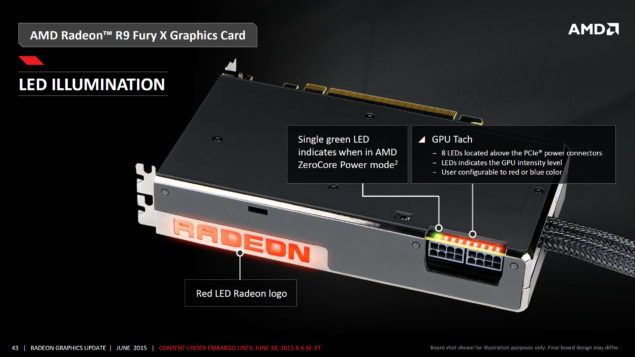 As for the pricing, the card will hit the market shelves on 24th June, 2015 for a price of $649 US. There's no word on custom models but you should anticipate them in the future.

AMD not just showed their fastest single chip graphics cards, but they also showed off their fastest dual chip graphics card too. The Radeon R9 Fury X2 is the epitome of AMD's design team. They not only managed to fuse two Fiji GPUs on the same PCB but they also managed to deliver a very small form factor based dual chip card that also comes with two 8-Pin connectors to boot up. The Radeon R9 Fury X2 is the next generation AMD Dual Chip design featuring two full Fiji XT GPUs that make up for a huge amount of performance rated at around 17 TFlops. This card has the PLX controller found in the middle of the PCB and will definately make use of the same water cooling design as the Radeon R9 Fury X graphics card. Display outputs on the Radeon R9 Fury X2 include a single HDMI 1.2 and three display ports. You can find more details in the specifications sheet below: