The latest AMD Radeon R300 family of graphics cards launches in a few weeks and we are looking at several cards being listed down on manufacturer sites. The Radeon R9 390X which was expected to be the flagship graphics chip, codenamed Fiji, turns out to be a Hawaii rebrand if the listing is correct and rumors that AMD's Fiji based cards will ship with a different branding scheme, similar to NVIDIA's Titan cards may just end up being true. 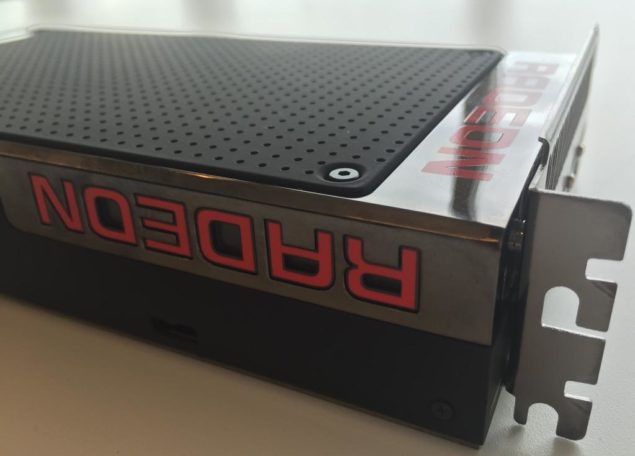 Since a couple days, several speculations have popped up after the OEM series were declared as rebrands officially be AMD on their site. Most users assumed that the rebrands in the Radeon R300 OEM lineup will suggest that the actual lineup will also be based on rebrands using older cores such as Hawaii, Tonga and Bonaire. The only card which is new in sight is AMD's Fiji graphics card which is based on a 28nm process. Previous rumors suggest that this chip will feature a 300W TDP and a 2.5D interposer with 4 GB HBM video memory dedicated on chip. On AMD's Financial Analyst Day, we broke out the news and revealed the first renders of the Fiji based flagship graphics card which is meant to use a water cooled design and a quite cool form factor which kind of looks cool when it comes to flagship offerings. The render has since been confirmed when Johan Andersson of DICE revealed the card which he has received by AMD from testing.

It is becoming more and more common that these high-end flagship cards get extra treatment from chip makers since they are the pride of the company. We can see similar stuff with NVIDIA who gave extra some extra treatment to the GeForce GTX Titan X with a black cooler design while the upcoming GeForce GTX 980 Ti will make use of the regular silver colored cooler. This reflects the enthusiast branding of products like the GM200 based Titan X and Fiji based AMD's flagship card.

So how do we know the AMD based cards are rebrands? Speculation and listings on various databases does confirm that the majority (if not all) of cards from AMD will be rebrands based on some renowned cores such as Hawaii, Tonga, Pitcairn and Bonaire. Videocardz did reveal the same scenario a few weeks ago in their round up of the entire 300 series cards. The listings we found through ASUS's forums reveals a few interesting cards which does confirm Videocardz findings and we will explain these in a moment. The cards revealed on ASUS forums include:

The first thing we get by looking at the top-end card of this listing reveals that it is Hawaii simply because Fiji can not feature 8 GB HBM memory. It is limited to just 4 GB on Gen1 implementation through single-link chip design. On the other hand, we know that Hawaii offered in the 300 series family will be a 8 GB card as it will be based on custom designs at launch. The second card which we believe is Tonga is also quite spot on with the leaks, we know that the Radeon R9 285 Tonga features just 2 GB VRAM across a 256-bit bus. It confirms why we see a sudden VRAM gap between the Radeon R9 370 which is the Pitcairn based card that does come in 4 GB VRAM models. There's a possibility that AMD introduces the full Tonga XT chip with 2048 stream processors in the line with 4 GB VRAM as the Radeon R9 380X. Rest of the lineup includes the Bonaire XT and Bonaire Pro based Radeon R7 360X and Radeon R7 360 cards which feature just 2 GB GDDR5 VRAM.

Aside from this, there have also been listings of Radeon R9 390, Radeon R9 380, Radeon R9 370 series cards on HIS's official website which can be seen in the images below. The launch is indeed scheduled in a few weeks so we can expect the AMD flagship going against NVIDIA's flagship GeForce GTX Titan X which gets revealed in a couple of weeks at Computex 2015.