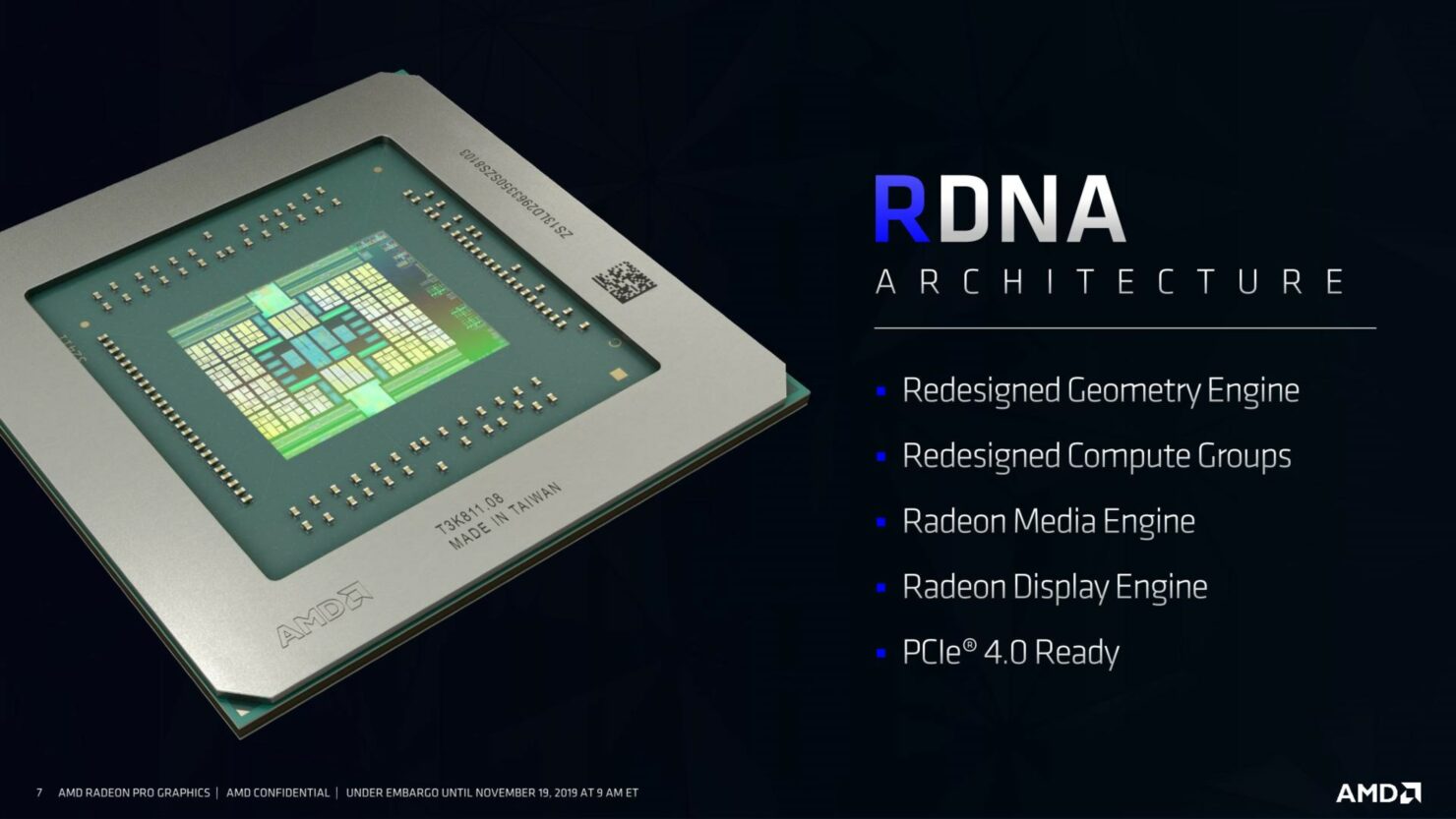 The AMD Radeon Pro W5700X is very similar to its consumer focused Radeon RX 5700 XT, but with a couple of changes, mainly on the software side. The AMD Radeon Pro W5700 XT features the full 40 compute units so we are getting 2560 stream processors and 64 raster operation units on the Navi 10 chip. The graphics card has a rated compute output of 9.5 TFLOPs which is slightly lower than the 9.75 TFLOPs that the Radeon RX 5700 XT offers so we are looking at slightly more tuned clock rates.

In terms of memory, the card features 16 GB of GDDR6 memory which is double the memory of its consumer aimed counterpart, running across a 256-bit interface at speeds of 14 Gbps. The card uses the same GDDR6 memory dies as the consumer variant and delivers a total bandwidth of 448 GB/s. Unlike the more recent Vega based offerings, the Radeon Pro W5700X doesn't feature ECC memory correction.

Moving on, the card features a TDP of just 240W which is comparatively good against the older Vega-based Pro lineup. The TDP is essentially the same as the Radeon RX 5700 XT if we do not factor in the power cost of the USB Type-C connector for VR HMD's. This connector alone requires 15W but when it's not being used, the card should land in the same TDP figures as the Radeon RX 5700 XT. Coming to the design of the card itself, the card is powered by an 8+6 pin connector configuration.

The Radeon Pro series makes use of the blue and silver color scheme on the shroud. The card is cooled by a single blower type fan which circulates air through the internal chassis which seems to be composed of a vapor chamber based heatsink block. There are six I/O ports on the back of the card, which include five mini DisplayPort (DP 1.4) and a USB Type-C port which is aimed at VR based setups, similar to NVIDIA's USB Type-C VirtualLink technology.

Key capabilities and features of the AMD Radeon Pro W5700 graphics card include:

You can currently get the Radeon Pro W5700X in two configurations for the Apple Mac Pro, one comes with a single GPU offering 16 GB GDDR6 memory and 9.5 TFLOPs of compute power while the other configuration comes with two GPUs offering 19 TFLOPs of compute power and 32 GB of GDDR6 memory. There's no word on the pricing, but the entry-level Mac Pro should set you for a total cost $6000 US and that's with a Radeon Pro 580X (8 GB GDDR5), so you can expect around a $1000-$1500 US extra for the Radeon Pro W5700X (16 GB) considering the consumer aimed Pro W5700 costs $799 US and is based on a cut-down Navi design.