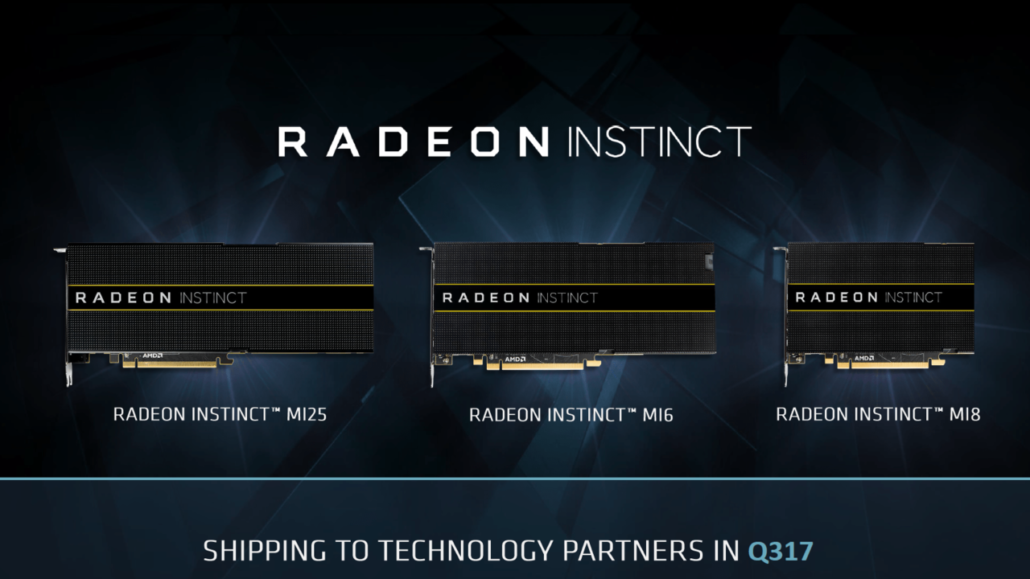 Through our Radeon Instinct server accelerator products and open ecosystem approach, we’re able to offer our customers cost-effective machine and deep learning training, edge-training and inference solutions, where workloads can take the most advantage of the GPU’s highly parallel computing capabilities.

The AMD Radeon Instinct MI25 accelerator is the fastest of the Instinct lineup. It features the Vega 10 graphics core with 4096 stream processors that are clocked at 1500 MHz. With these clock rates, the card delivers 24.6 TFLOPs of FP16, 12.3 TFLOPs of FP32 and 768 GFLOPs of FP64 compute that is aimed at deep learning tasks. The card also packs 16 GB of ECC HBM2 memory which delivers a total of 484 GB/s bandwidth. 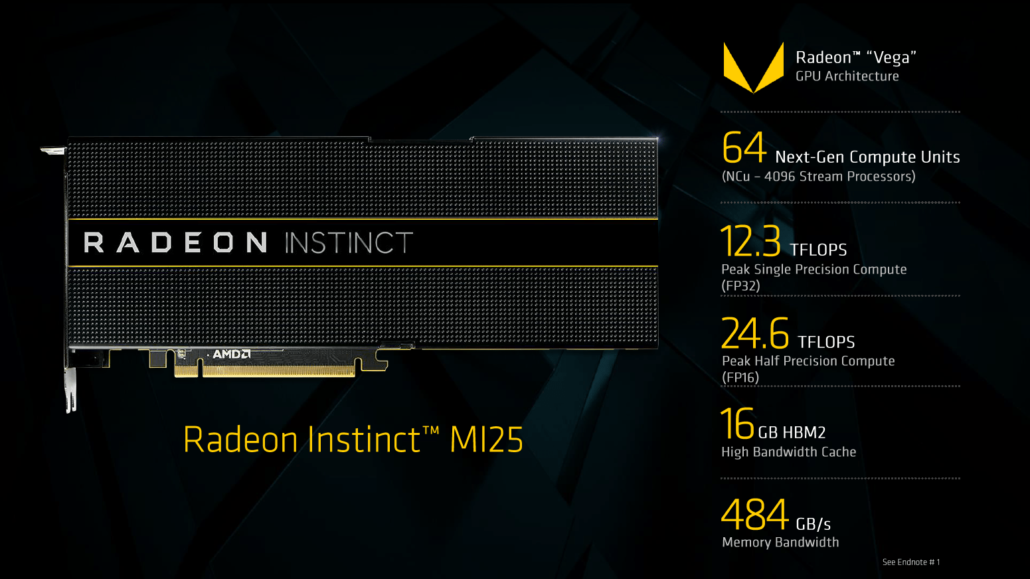 The Radeon Instinct MI25 accelerator, based on the new “Vega” GPU architecture with a 14nm FinFET process, will be the world’s ultimate training accelerator for large-scale machine intelligence and deep learning datacenter applications. The MI25 will deliver superior FP16 and FP32 performance in a passively-cooled single GPU server card with 24.6 TFLOPS of FP16 or 12.3 TFLOPS of FP32 peak performance through its 64 compute units (4,096 stream processors). With 16GB of ultra–high bandwidth HBM2 ECC GPU memory and up to 484 GB/s of memory bandwidth, the Radeon Instinct MI25’s design is optimized for massively parallel applications with large datasets for Machine Intelligence and HPC-class systems. via AMD 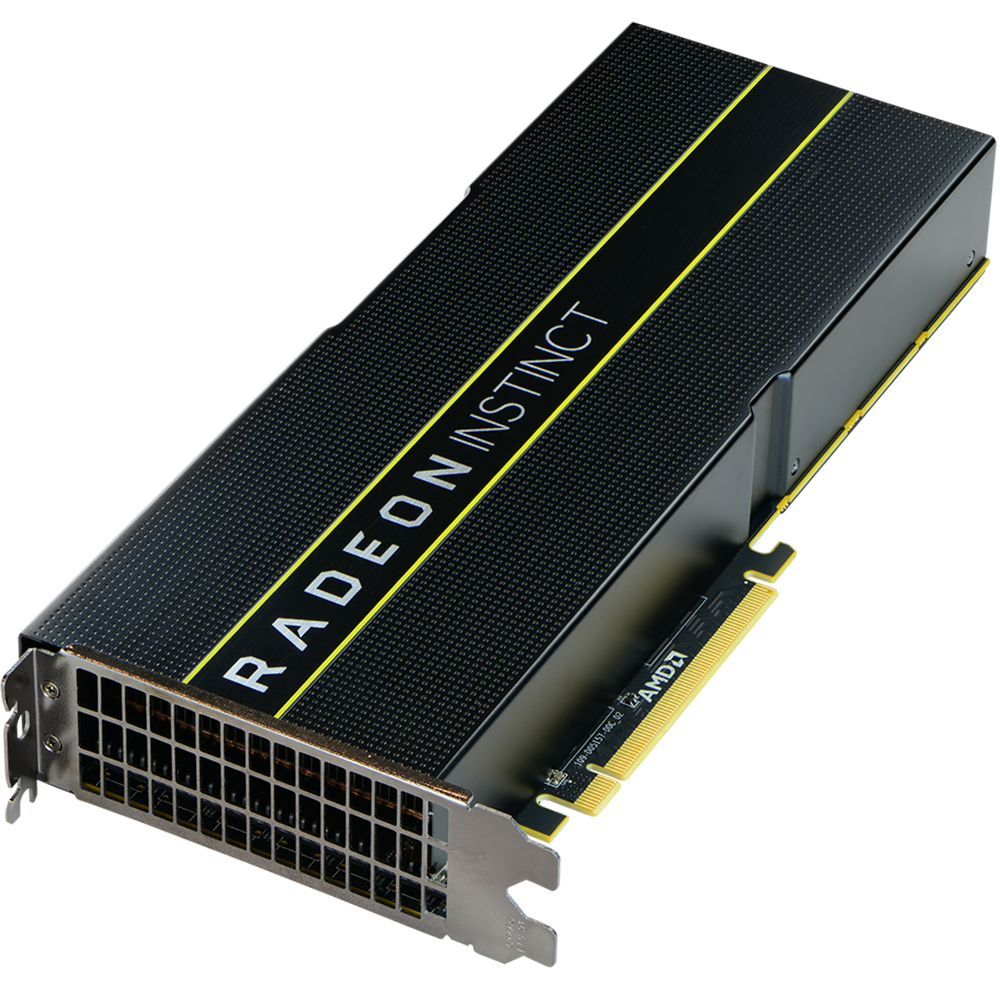 In addition to the specifications, the card comes in a dual slot, full height form factor. It requires dual 8-pin connectors to power and the TDP is rated at 300W. The card is passively cooled so it's going to receive cooling from air inside large server racks. The card ships with a three year limited warranty.

AMD is also launching the Radeon Instinct MI8 accelerator which is designed as an inference card. The Instinct MI8 comes packed with the Fiji XT GPU that is based on the 28nm process. The GPU is housing the same number of cores as the Instinct MI25 which are 4096 in total but they are based on the older GCN revision and clocked much slower. 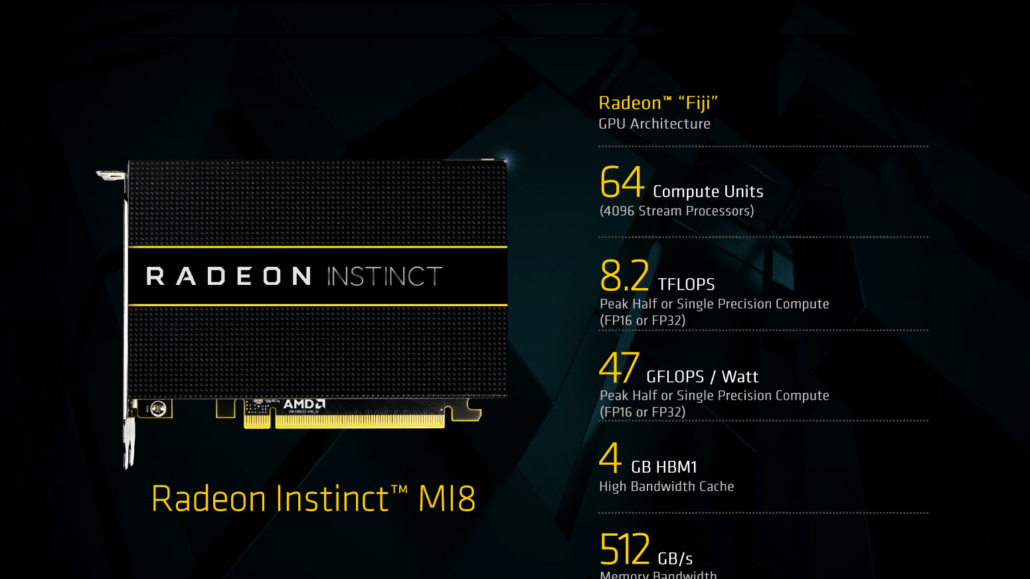 The Radeon Instinct MI8 accelerator, harnessing the high-performance, energy-efficiency of the “Fiji” GPU architecture, is a small form factor HPC and inference accelerator with 8.2 TFLOPS of peak FP16|FP32 performance at less than 175W board power and 4GB of High-Bandwidth Memory (HBM) on a 512-bit memory interface. The MI8 is well suited for machine learning inference and HPC applications. via AMD 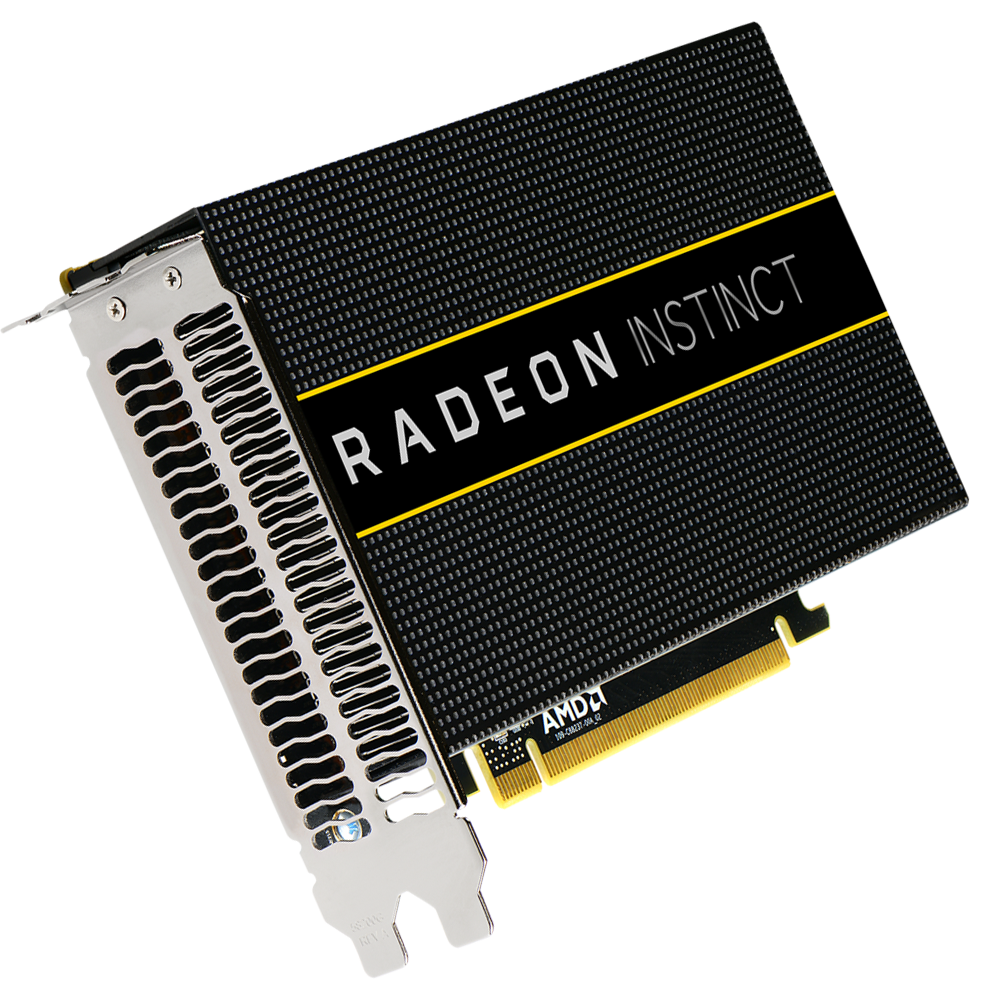 In terms of specifications, the card features 4096 stream processors that are clocked at 1000 MHz. This delivers a rated compute output of 8.2 TFLOPs (FP16 / FP32) and 512 GFLOPs of FP64 compute at 1/16th rate. The card also features 4 GB of HBM1 memory which delivers 512 GB/s bandwidth. It is slightly faster than the Vega based Instinct MI25 accelerator but requires two more stacks and is more power hungry. AMD is rating the compute output of this card at 47 GFLOPs/Watt of FP16 and FP32 compute while FP64 compute is rated at 2.9 GFLOPs/Watt.

The card comes in the same small, dual slot package as the Radeon R9 Nano. It has a rated TDP of 175W and power is provided through a single 8-pin connector. The card also lacks active cooling since it's aimed at servers.

Lastly, we have the AMD Radeon Instinct MI6 graphics accelerator. This card packs the Polaris 10 core and is aimed at both Deep Learning and Inferencing workloads. In terms of specifications, the chip packs the complete 2304 stream processors. All cores are clocked at 1237 MHz. At the rated clock speeds, the chip delivers 5.7 TFLOPs (FP16 / FP32) compute and 358 GFLOPs of dual precision compute performance. 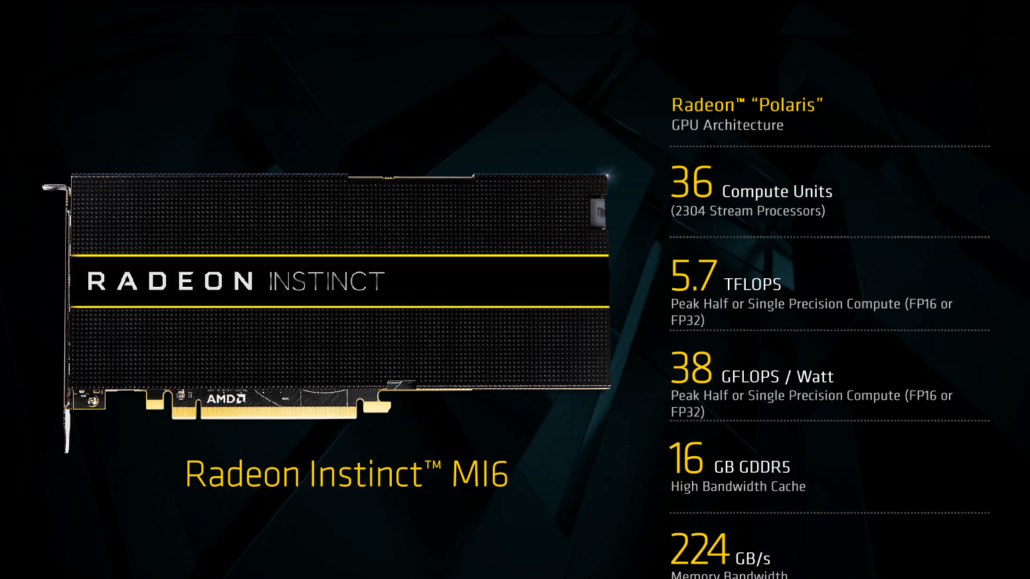 The Radeon Instinct MI6 accelerator, based on the acclaimed “Polaris” GPU architecture, is a passively cooled inference accelerator with 5.7 TFLOPS of peak FP16|FP32 performance at 150W board power and 16GB of ultra-fast GDDR5 GPU memory on a 256-bit memory interface. The MI6 is a versatile accelerator ideal for HPC and machine learning inference and edge-training deployments. via AMD 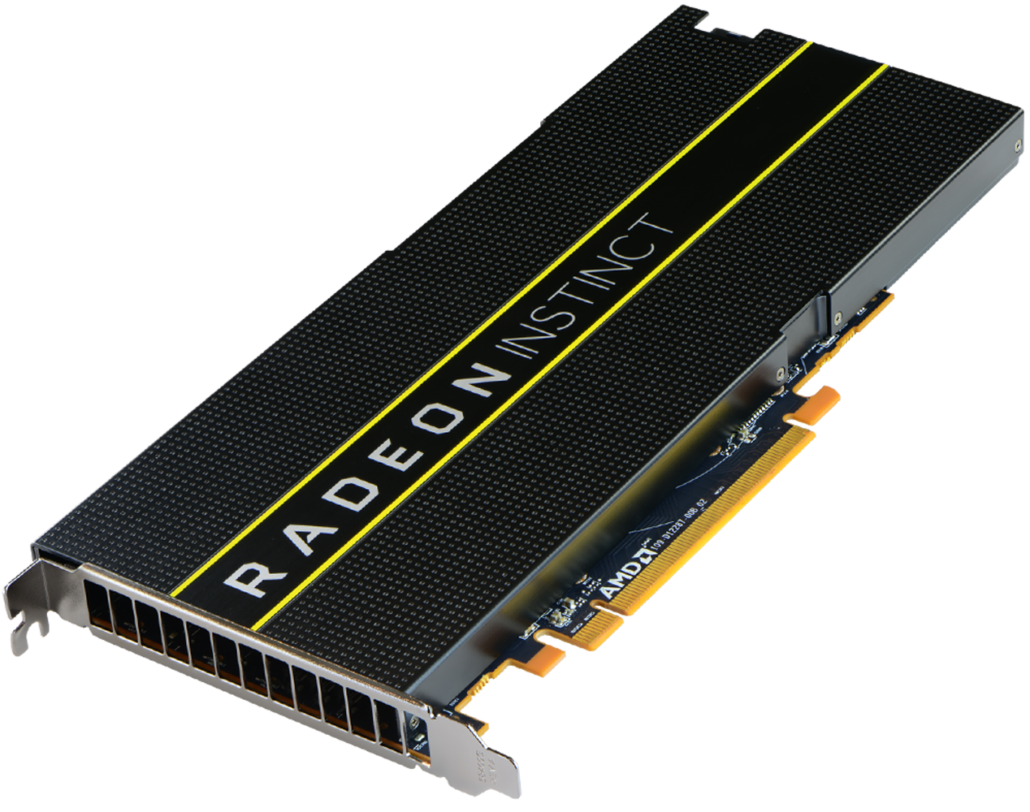 The card also comes with 16 GB of GDDR5 memory clocked at 7000 MHz along a 256-bit wide bus interface. This delivers up to 224 GB/s of bandwidth on the card. The card comes in a single slot, full length form factor and is passive cooled with air coming in from the large server arrays. TDP on the card is set at 150W so power is provided by a single 6-pin connector.

Planned for June 29th rollout, the ROCm 1.6 software platform with performance improvements and now support for MIOpen 1.0 is scalable and fully open source providing a flexible, powerful heterogeneous compute solution for a new class of hybrid Hyperscale and HPC-class systems. 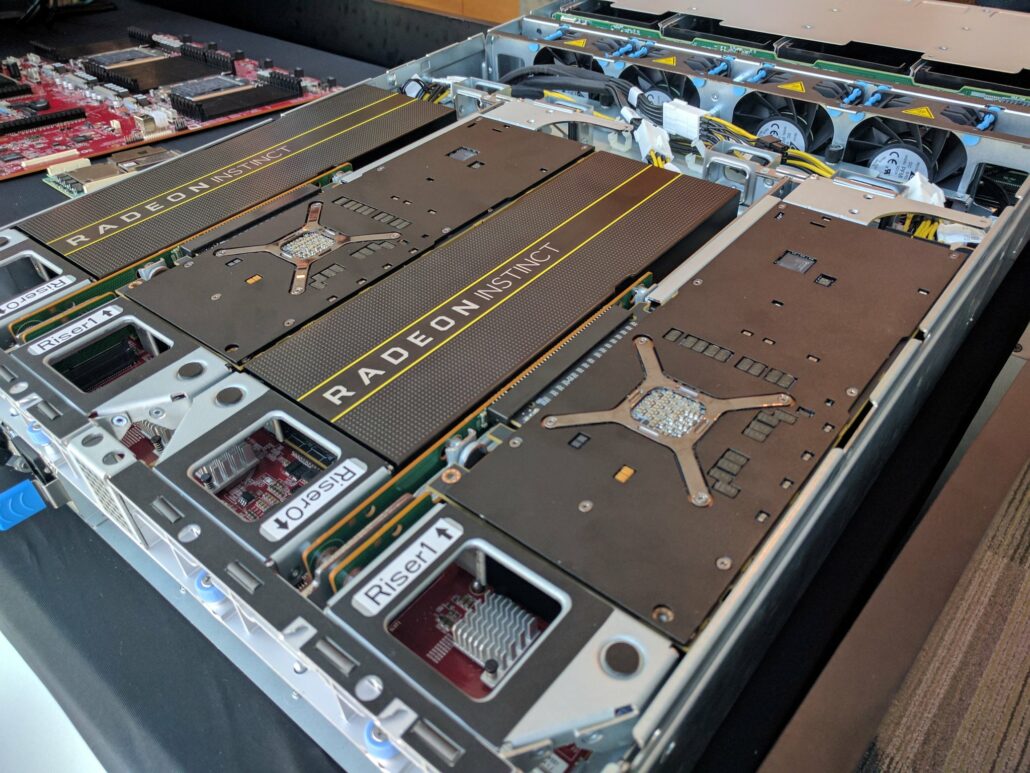