Disclaimer: The conclusion and guidance given at the end has been given in a completely non-professional capacity. Since this is not intended to be professional investment advice, we cannot be held liable in any way.

AMD (NYSE: AMD) has just reported its Q1 Results for 2014. About 3 months back, I advised against investing (short) because of my forecast of a significant decrease in revenue next quarter. And as far as shorts are concerned, the chipmaker has infact reported a loss. Interestingly however, the reported GAAP diluted LPS (Loss Per Share) of 0.03$ and consequently the reported non-GAAP diluted EPS of 0.02$ is higher than analysts expectation of a  break even on non-GAAP. 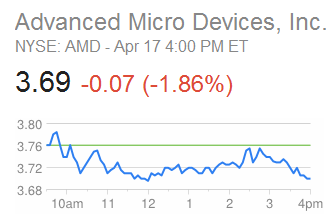 Numbers aren't everything, because even though the numbers might make it appear as if this Quarterly Report depicts a bad result, the reality is quite different. What we are seeing are signs of an actual, possible company turnabout. I.e. this report could be the first sign that the Profit of Q4 FY13 was not a mere fluke.

The Graphics & Visual Solutions portion of AMD (NYSE: AMD) fell about 15% Quarter over Quarter but rose a staggering 118% Year over Year. Interestingly however and just as expected, console sales dried off relative to last quarter while Radeon sales rose relative to last quarter. The Radeon demand was largely due to SCRYPT based GPU Mining and as profitability for the computer 'Gold Rush' comes to an end, the demand for the same should normalize. The high demand of R7/R9 GPUs also led to a very high ASP (Average Selling Price) of GPUs while the ASP of CPUs remained almost stagnant. Infact the CPU portion of AMD (NYSE: AMD) declined 8% Q/Q and 12% Y/Y which shows an actual non seasonal, non cyclical decline in CPU sales. This is attributed to the Global PC Market shifting and Intel's Process lead over the Steamroller core.

Outlook and Verdict: [Bullish] Although investment in AMD (NYSE: AMD) is risky, this is the perfect opportunity for long investors to buy into AMD Chip Stock. The reason being that the turnabout we saw in Q4 FY13 is holding quite well and was not a one-time fluke. We could quite possibly be seeing a genuine company turnabout, though regardless, we are seeing a healthy growth. That said, I expect Red's revenue to stay about the same or fluctuate within plus minus 5% by next quarter.  With Console Sales normalizing it would be a very close call between profit and loss. There is no black and white forecast like last time. The chances are 50:50; but if i were a betting man, I would bet on a profit next quarter.