AMD has started preparing the A85FX-FM2 Chipset for its next generation Trinity APU's which are part of its "Comal" Platform. The Comal Platform along with Trinity APU's are expected to launch in Q1-Q2 2012 and this news suggest that AMD is gearing up for an early 2012 launch of its new APU platform.

According to AMD, The new A85FX Chipset will add support for RAID 5 along with an increased amount of SATA 3.0 slots. The chipset other then these will retain all older features of the A75-FM1 Chipset such as: 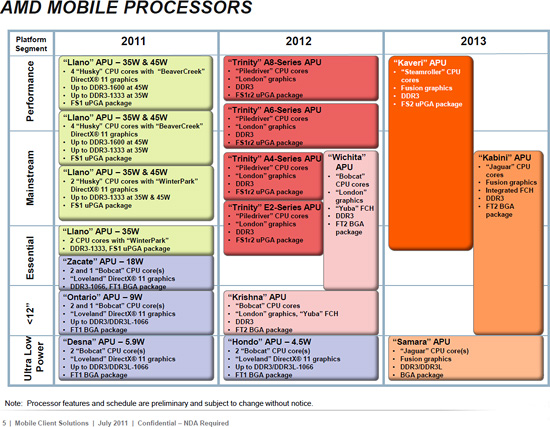 The Chipset will also allow a boost of upto 50% GPU performance for the built in DX11 IGP's on Trinity APU's. Trinity APU's themselves would feature  4 enhanced Bulldozer based x86 cores, code named 'Piledriver" and AMD's next gen "HD-7000" Series chips as rumors suggest. However it has been reported that the new chipset will only support FM2 socket APU's and will not be compatible with Llano Fusion chips.