In a video posted on AMD's official Youtube page, John Byrne, SVP and GM of AMD Computing & Graphics Business Unit, showed off the first sample of their next generation Carrizo APU. While most of the details regarding the upcoming APU are known, there were two key points mentioned by John, first that the AMD Carrizo APU will be available in two variants, Carrizo-L (entry level notebooks) and Carrizo (high performance notebooks and All-In-Ones). Secondly, both variants of Carrizo are launching in the first half of 2015 and AMD already has working samples of both chips at their workplace.

While AMD won't release the more juicy details until ISSCC 2015 that's happening in February 2015, it's nice to finally hear something official on Carrizo APU and seems like most of the details we have known so far are legit. AMD is going to launch Carrizo in two variants, Carrizo-L will be the entry level and mainstream notebook chip while the Carrizo APU for high-performance and AIO products will be known as Carrizo. Some rumors do point to the desktop variant being called Carrizo-D but AMD didn't even mention about the desktop platform in the video but we already have some details as to what's it all about. Another key thing told by John was that AMD Carrizo APU and Carrizo-L APU will be platform compatible and available in BGA form factor. The main difference between with Carrizo and Carrizo-L is that Carrizo will ship with Excavator cores while Carrizo-L will feature PUMA+ Cores. The desktop part will be on FM2+. However the video did confirm that there isn't going to be any sort of HBM or stacked DRAM technology available on Carrizo so we have to wait a bit longer to see that in action. Nevertheless, details from couple of days ago will give you a roundup of all the information we know about Carrizo so far.

The 28nm Carrizo APU will measure at 244.62 mm2 and pack 3.1 Billion transistors. For comparison, AMD’s Kaveri APU packed 2.41 Billion transistors on a 245 mm2 die and was based on a 28nmSHP process from GlobalFoundries. The increased number of the total transistors could be due to two things, the new Excavator architecture and the use of new GCN graphics technology on Carrizo. Before we go into details, do read the following note:

"We continue to innovate and build upon our existing IP to deliver great products for our customers," said John Byrne, senior vice president and general manager, Computing and Graphics business group, AMD. "AMD's commitment to graphics and compute performance, as expressed by our goal to improve APU energy efficiency 25x by 2020, combines with the latest industry standards and fresh innovation to drive the design of the 2015 AMD Mobile APU family. We are excited about the experiences these new APUs will bring and look forward to sharing more details in the first half of next year."

The flagship "Carrizo" processor will integrate the new x86 CPU core codenamed "Excavator" with next generation AMD Radeon™ graphics in the world's first Heterogeneous Systems Architecture (HSA) 1.0 compliant SoC. The "Carrizo-L" SoC integrates the CPU codenamed "Puma+" with AMD Radeon™ R-Series GCN GPUs and is intended for mainstream configurations. In addition, an AMD Secure Processor will be integrated into the "Carrizo" and "Carrizo-L" APUs, enabling ARM®TrustZone® across the entire family for the security commercial customers and consumers expect. Utilizing a single package infrastructure for "Carrizo" and "Carrizo-L," the 2015 AMD Mobile APU family simplifies partner designs across a broad range of commercial and consumer mobile systems.

"Carrizo" and "Carrizo-L," are scheduled to ship in 1H 2015, with laptop and All-in-One systems based on the 2015 AMD Mobile APU family expected in market by mid-year 2015. via AMD

Prior to this leak, rumors revealed that Carrizo will feature 30% performance increase over Kaveri generation of processors which we thought was pure speculation at best but the slide clearly mentions a 30% increase at only 15W power input which is pretty impressive. Additionally, AMD will also add AVX2, BMI2, MOVBE and RDRAND support to the instruction set which brings the extension feature set close to Intel’s Haswell. Since the targeted platforms for these APUs are notebooks, all-in-ones and convertibles, they will be shipped in BGA )FP4) package and will ship in variants ranging in TDPs of 12/15/35W. The desktop variants will be rated at a power draw of 40/45/65W.

On the GPU side, we have the 3rd Generation GCN (Volcanic Islands) core which is a great plus point for this level of APU. You should keep in mind that the Volcanic Islands graphics isn’t the codename for AMD’s Radeon R200 lineup but infact used to denote their flagship Hawaii based chips. The integrated graphics would still be based on the 28nm process and its hard to say whether the Compute Unit count will increase in the Carrizo APU generation of products. We will definitely see an improved and efficient design which will allow faster clock speeds on these great integrated chips which make many upcoming games run off without the need of a discrete graphics card at decent detail quality.

The graphics die will still feature 8 Compute Units which denote 512 stream processors along with higher memory efficiency which will deliver better performance throughput since APUs are generally bandwidth starved, Delta color compression and feature full HSA support with a high-performance integrated bus for graphics and DRAM along side some software enhancements such as Fine-grain preemption for context switches and in addition to Mantle, feature support for DirectX 12 API too. It remains to be seen if the faster desktop variants will get an updated die since reports have alleged that features from Tonga will be derived in the latest installment of  APUs. This could mean several things, the features on Tonga such as color compression and memory bandwidth optimizations could be in place along with better XDMA Dual graphics support plus the addition of more stream processors and GCN Compute units.

The mobile platform is targeted as a SOC while desktop chips will be compatible with FM2+ socket with the A88X “Bolton” FCH. Some early specifications have been leaked which we have detailed in an article here. 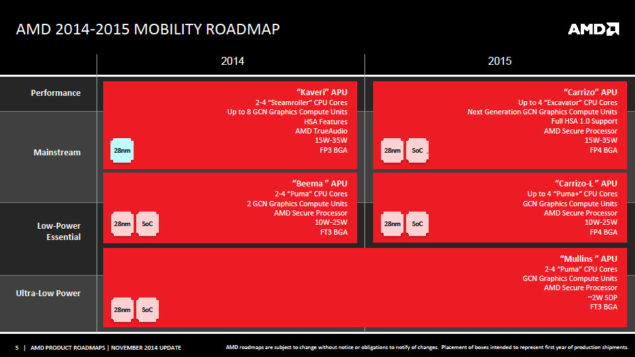