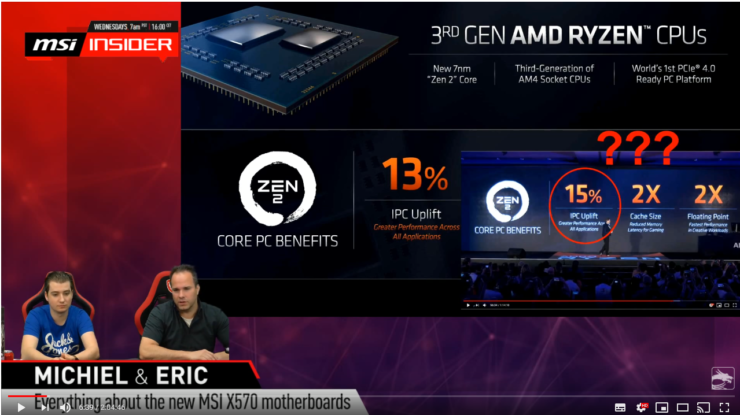 With all major launches, there is often a bit of confusion on details.  Sometimes bigger and sometimes smaller.  This go around it's an interesting one with regards to the IPC of the new Ryzen 3000 Series CPUs.  Launching on July 7th the Ryzen 3000 Series is promising 15% IPC which is great, but there seems to be a bit of a disconnect between what AMD showed to the public vs what they showed to MSI and potentially other board partners.

The slide that was presented to MSI showcased a 13% IPC improvement, which is still a decent uptick and nothing to complain about.  But was it a disconnect? Was it planned in case of a leak so that if it had leaked then people would anticipate a 13% IPC uplift then have their expectations subverted when the 15% slide was shown publically? It is always possible that the 13% slide shown to MSI was a much earlier revision prior to final performance tuning and nothing to panic over.

Either way, it is always interesting when discrepancies between what is shown in the backroom vs what is shown on stage.  Tempering expectations to somewhere between 13-15% is a very realistic expectation of performance improvement and as I mentioned earlier is still a solid uplift over Zen+ and even better over 1st Gen Zen designs.  The good news is we won't have to wait too long to see just what shakes out once the reviews go live in July.

Robert Hallock of AMD, the man on stage doing the demos and owner of sweet shoes, came out on Twitter to clarify the discrepancy between the 13% and 15% IPC increases.   He put it very simply that the Cinebench 1T-derived IPC results were 13% and the results from SPECint, which are more rigorous,  showed the 15% IPC gain that was shown on stage.  So, both are right and goes to show you that IPC will vary a bit from application to application.

Prior to presenting onstage @ Computex , we planned to use a Cinebench 1T-derived IPC figure. That is 13%. Slides were made and shared.

In the end, we decided it would be best to use a more rigorous SPECint-derived figure. That is 15%.

The AMD Ryzen 3000 lineup is based on the new Zen 2 core architecture which is made possible with TSMC’s bleeding-edge 7nm process node. AMD has reaffirmed that their Zen 2 based Ryzen 3000 series processors for the AM4 desktop platform will be available on July 7th, 2019.

AMD has made significant changes to its CPU architecture which help deliver twice the throughput of their first-generation Zen architecture. The major points include an entirely redesigned execution pipeline, major floating-point advances that doubled the floating-point registers to 256-bit and double bandwidth for load/store units and this should allow for lower latency between the CPU Complex which retains the 4+4 Core arrangement.

Zen 2 also includes stronger hardware-level enhancements when it comes to security. This further solidifies AMD CPUs against enhanced Spectre variants and these mitigations will be adopted fully by Zen 2. When it comes to Zen, AMD already had strong software level support when it came to security and they have further enhanced it through low-level software mitigations.