AMD has officially launched their 14.1 BETA driver which adds support for the latest Mantle API in GCN enabled graphics processing units. The latest driver enables Mantle in Battlefield 4 which is the first game to adopt the new API delivering faster performance and improved frame pacing.

The Mantle drivers have been released and now available to download (please visit this page for download links and change log for the Catalyst 14.1 BETA driver). The patch for Battlefield 4 was released a few days ago which added Mantle support to the game but public was unable to use the API until the drivers were out at AMD's end. We stated in our previous article that AMD would provide press with an exclusive testing time ahead of official launch. We were provided the BETA drivers by AMD a few hours ago and had only limited time in our hands for testing Mantle in a few games with AMD's GCN enabled graphics cards which include the Radeon R7 260X, R9 270X and R9 280X.

So how does Mantle work?

The Mantle API is geared towards AMD GCN hardware which includes their Radeon HD 7000, 8000 and R200 series cards.While Mantle's first focus would be the graphics processing unit utilization, from recent benchmarks we have come to the conclusion that Mantle's initial focus would be to eliminate scenarios where the processor becomes the bottleneck of the entire system causing performance degradation. Mantle API helps by reducing the CPU load for better utilization of the system hardware.

This shows that performance improvements with be expected on both Intel and AMD processors based rigs since Mantle removes a lot of the load from the CPU to allow the GPU to run at its true potential. Users who are currently using Kaveri APUs along with GCN based graphics cards would expect a massive improvement as compared to users with FX CPUs or intel’s high-end range of processors. This is mainly since Kaveri APUs which compared to FX processors and Intel's HEDT lineup are more limited in terms of x86 potential and total threads hence lesser load on the CPU side from different tasks would enable the GPU to better utilize the full potential of the Kaveri APUs. Unfortunately, we didn't have access to Kaveri since we haven't received a sample yet so our testing would be done on our AMD test rig which includes a FX-8350 processor.

Do note that Mantle update doesn't has any sort of restriction when it comes to CPU so gains are expected across both Intel and AMD based processors since it offers more in-depth utilization of the hardware.

A post in the previous article by our writer Usman Pirzada provides a good explanation to this:

We have seen a demonstration of this from Oxide Games who were able to run their Star Swarm benchmark with the FX-8350 under clocked to 2 GHz while the system remained GPU bound. This shows that Mantle reduce much load off the CPU which not only did it free up a lot of CPU time when switched to Mantle, but Mantle itself took only a fraction of CPU time to function as opposed to DirectX’s required driver thread. This means that developers have the option to go one of two ways if they use Mantle: they can utilize that unused CPU time to improve their game, or they can simply drop the CPU requirement.

Note - AMD has clarified that optimizations for GPU bound scenarios would come in to effect in future releases of their Catalyst driver.

AMD's Catalyst 14.1 BETA is available to download from the following links but im not sure if this is the same release which press were sent or a different build. Nevertheless, the build we received had some issues which are mentioned below: 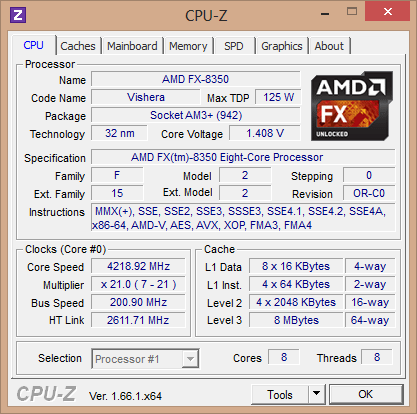 Battlefield 4 is the latest installment in the Battlefield franchise. Developed by DICE and published by EA, Battlefield 4 takes multiplayer FPS to the next level unleashing new levels of destruction and the game changing LEVOLUTION. Battlefield 4 is a true next generation experience on the PC rendered with the power of Frostbite 3 which features stunning DirectX 11.1 effects and Tessellation which only a few games dare to match.

Battlefield 4 is the first AAA title to feature support for AMD's Mantle API and hence is our main benchmark to analyze Mantle's real world advantages in gaming titles. We tested Mantle in both Single and Multiplayer scenes. In Multiplayer, we were able to get large improvement in performance with Mantle as opposed to Single player since CPU is under more effect when running the multiplayer tasks.

The Star Swarm Demo is basically a tech benchmark to showcase the demands of a next generation RTS. It has the capability to have about 10 000 units on screen at any given point, all with their respective AIs, Path Finding, Threat Assessment and Physics. Needless to say that this demo is very very CPU Intensive. It is here that the Raw Power of AMD’s Mantle is apparent. Because it can make the CPU-GPU couple more efficient, a fully CPU Bound scenario can get you an ulpift of 319%! (Thats unheard off without a hardware update).

And it gets better, the Nitrous Engine powered Star Swam demo is a dynamic demo. I.e its not a ‘canned’ demo where the CPU and GPU just play out a scripted story. The battle taking place is a real computed simulation, which is why you can expect different results when running the benchmark. It also shows how drastically Mantle lowers the burden of the CPU and its not just bells and whistles either, its a true software upgrade with a real increase in your game compute. The Star Swarm demo could give an early impression of the upcoming Star Citizen from RSI which is an open world space sim build on a similar scale. Star Citizen will also adopt the Mantle API.

We had little time to test Mantle and by the time of posting, the drivers to enable the API in Battlefield 4 have already been released to public.

AMD had promised some huge improvements with Mantle API and they have been able to deliver them in a few scenarios as noted in our Battlefield 4 testing. The multiplayer section which relies more on the processor was able to get a drastic improvement in frames with Mantle enabled as opposed to DirectX. In single player, we were unable to notice significant gains since that section of the game is more GPU bound and AMD plans to further optimize GPU utilization in future revisions of Mantle Catalyst drivers.

Star Swarm was a demo which clearly showed the power of Mantle. We were using AMD's top tier FX-8350 processor for testing and it clearly showed an increase in performance over DirectX where GPU isn't a main role player. The number of units on screen and batches was clearly implying a heavy CPU use environment and the Mantle API enabled much better by offloading certain tasks from the CPU for better utilization.

However, there are still various issues with Mantle currently related to CrossFire and Eyefinity along with proper support for GCN graphics cards which will be added later. The Catalyst 14.1 BETA is optimized towards Radeon R9 290 series, Radeon R7 260X and A10 Kaveri APUs so while it does support other GCN enabled products, the improvements aren't as great as those four GCN products. Mantle is still in early stages and would be improved over the months adding support for future titles such as Thief, Star Citizen and more. 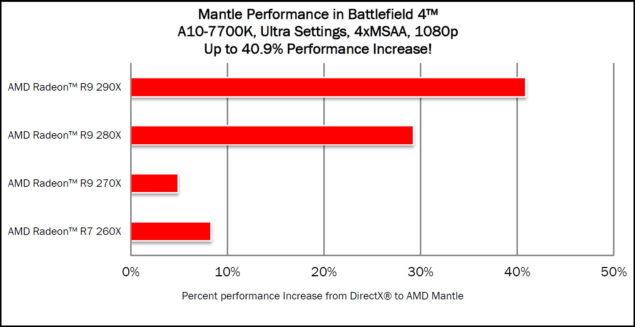 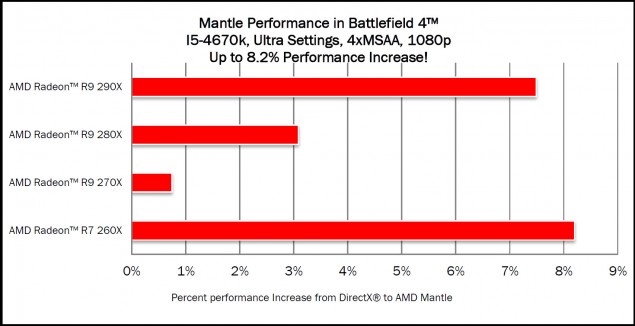 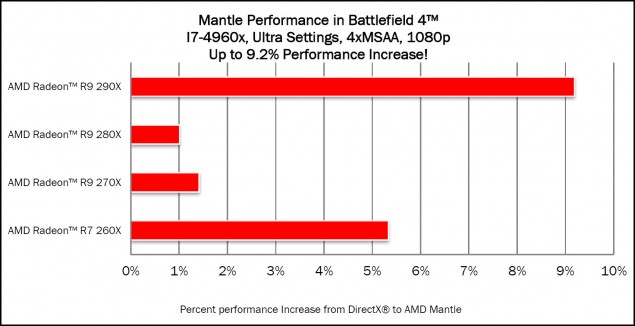 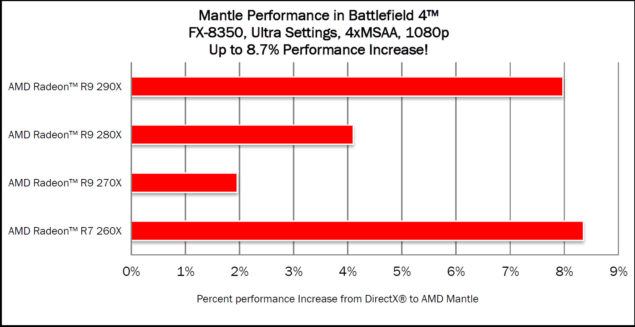 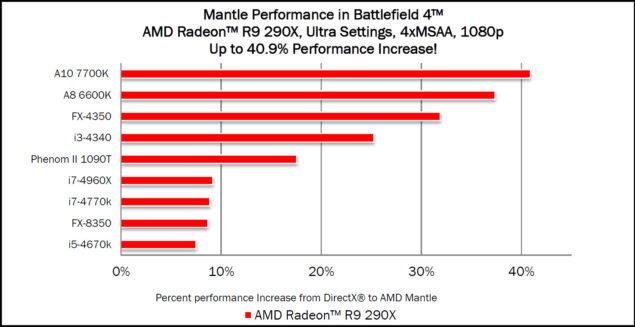 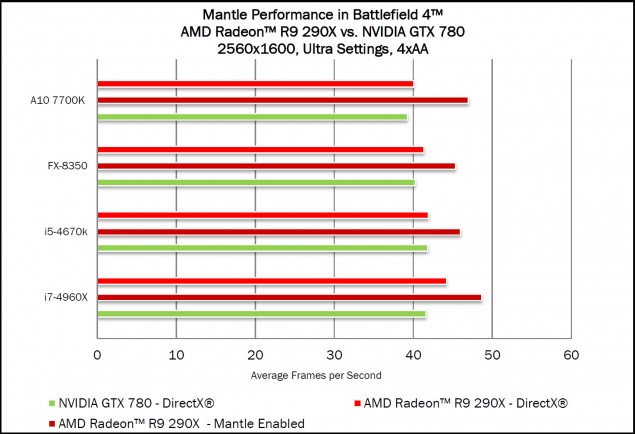 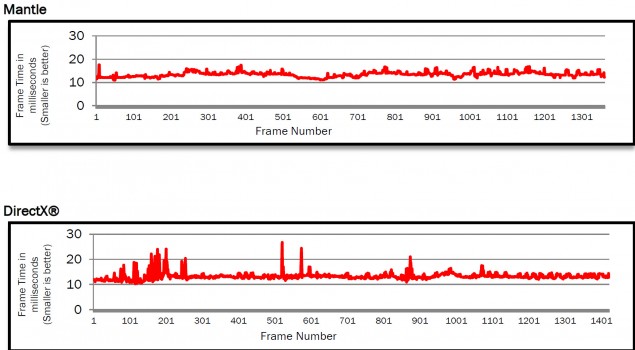