It has been just a few weeks since the release of the RX 480 graphics card and we have already started hearing rumblings of a brand new GPU in the works by the name of the Radeon RX 490. Just a few days ago, AMD, on its website, accidentally listed the RX 490, a fact that was quickly spotted by a redditor and posted. Many were quick to disregard it as a typo but this type of error is something we have already seen in the past and some hints given to us by past leaks told us something else entirely.

This is not the real logo.

The RX 490 will be AMD's 4K ready flagship that will be taking on the GTX 1080 at a (probably) similar price point. It is going to be the crown jewel in AMD's RX lineup. The existing Polaris based lineup currently maxes out at the Polaris 10 based RX 480 - which is roughly equivalent to the GTX 1060 in terms of graphical performance. According to AMD, Polaris 10 is the largest 14nm FinFET GPU available right now and that raises interesting questions what we can expect from the RX 490. 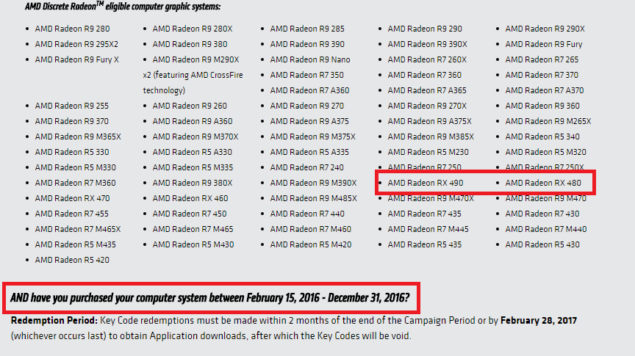 [If you know this part, you can skip this] AMD uses a predictable nomenclature while naming its test boards. All of these boards start with the letter C (which probably stands for consumer) followed by five numbers. The first digit after C almost certainly denotes the generation of the graphic card. The second digit apparently represents the relative rank of the chi p in the same lineup. The numbers that follow are much harder to guess at externally and can depict any specification whatsoever. Since the numbering follows a very obvious trend however, its not that hard to figure out how AMD builds the lineup. Before we go any further, take a look below.

By the same logic, Polaris boards should have the C9XXXX nomenclature, and this is something we have already seen before. The Baffin XT GPU listed on Zauba had the C98101 code name, which is clearly a Polaris die. Apart from this we spotted a total of two more variants on Zauba which are probably also Polaris GPUs. Keep in mind that the INR value given to these dies is just the insurance value (and does not depict the expected MSRP of the same).

To tackle this particular topic, I will be referencing some of the shipping data from Zauba we have covered in the past. We saw four distinct Polaris board variants by the names of C91, C92, C94, C98 and C99. So far, we have been able to account for 4 out of the 5 sightings. The insurance value of these particular pieces was in ascending order with a very very large difference between C98 and the C99 counterparts. Here is what was explicitly stated on one of the shipping manifests: the Baffin XT GPU (aka Polaris 10) was the C98 variant.

In fact both C94 and C98 boards represent iterations of the RX 480 (namely 4GB and 8GB). This automatically means that the C91 and C92 variants correspond to the Polaris 11 GPU (and the low insurance value gives strong weightage to this rationalization). Please note that the PCB (which was tested separately this time for reasons unknown) for the RX 480 was code named 'D00' and this is the number you will find on any RX 480 if you care to look at the code near the PCI-E fingers.

That only leaves the C99 variant not accounted for. Here is where things get really interesting. The C99 variant is roughly double the value of the last GPU: the C94 (aka Pol 10) variant. INR does not correspond directly to MSRP, but usually has a high correlation with the GPU's performance or features. In this case, it would seem that the C99 test board was at least two times as valuable as a C94 test board. Here is another fact. The INR value of the test board is roughly about the same (INR 125350) as the Gemini test board (Radeon Pro Duo). Finally the nomenclature C99 indicates that the GPU is of the Polaris family (remember, the first number after the letter C represents the architectural generation.) but roughly twice the power of the RX 480.

The RX 490 is a dual GPU graphics card

All of these things indicate to us that we are looking at a dual GPU solution, probably one based on a full version of Polaris 10. The only other alternative was that the C99 variant is Vega 10 but there are some gaping holes in that theory that in my opinion put it at negligible probability: 1) Vega 10 by recent reports is too early in the development stage to have made it out to the FOC testing phase. In fact, if I were to offer some proof: the C99 board passed RRA certification on 8th April 2016 which was way before AMD celebrated the Vega 10 GPU development milestone! 2) The nomenclature indicates to a Polaris card.

So we know for a fact that the C99 board has yet to be accounted for. We know that its value is equal to roughly double of the RX 480. We know that the nomenclature indicates a Polaris GPU yet Polaris 10 is the full fat chip (meaning there isn't a more powerful Polaris variant out there) and finally, that it passed RRA certification way before Vega 10 was anywhere near completion. In fact, the only way the RX 490 ends up being a Vega 10 GPU is if it arrives next year (which would mean that the C99 board will be called something else), which doesn't make a lot of sense considering its (RX 490) listing has popped up in AMD partner AIB sites as well.

As far as the pricing or the exact specification goes, we don't really have much information on that count. Keeping in mind AMD's strategy however, I doubt the card will be priced in the same range as the Radeon Duo Pro and I definitely would not be surprised if it is priced very similar to the GTX 1080. AMD has previously stated that two RX 480s can beat a GTX 1080, and it is possible that this innocent enough statement was a big hint to what was coming sooner rather than later.