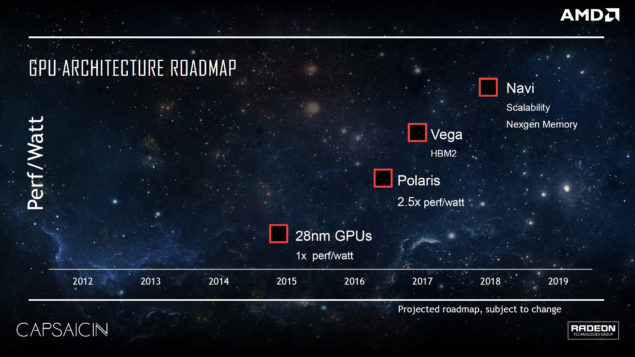 The latest AMD GPU Architecture Roadmap was showcased at Capsaicin 2016.

The latest details on AMD's upcoming generation of graphics architecture comes straight from Videocardz (via 3DCenter). The sources managed to find some very critical details on AMD's upcoming Vega GPU which has also been known as Greenland. The decision to name AMD GPUs after stars rather than Islands happened after the Radeon Technology Group was formed which is being led by Raja Koduri. Under his leadership, the team at RTG presented their first roadmap to the audience at Capsaicin 2016.

According to the LinkedIn profile of Yu Zheng who is the manager of research and development at AMD, the upcoming Greenland GPU at its peak capacity, will feature 4096 stream processors. These are not the current generation stream processors but utilize the advancements made in the IP v9.0 generation of graphics SOCs under development by AMD. It is also noted that this chip is the "Leading Chip" of the first graphic IP v9.0 chip generation. You can see the image to the profile and listed details below:

The Linkedin Profile of an AMD employee has revealed the specs of AMD's flagship Vega GPU.

Following the same approach as NVIDIA who put forward a roadmap for their upcoming GPUs, we got to see two new products, Vega and Navi. We know very well that AMD's Polaris architecture currently comprises of two chips. The Polaris 10 is the high-end graphics core which was demoed at Capsaicin while the Polaris 11 is the entry level graphics core which was demoed back at CES 2016. Both chips are based on the 14nm FinFET architecture from Global Foundries and are expected to feature up to 2.5x the performance per watt compared to the currently available GCN revision. 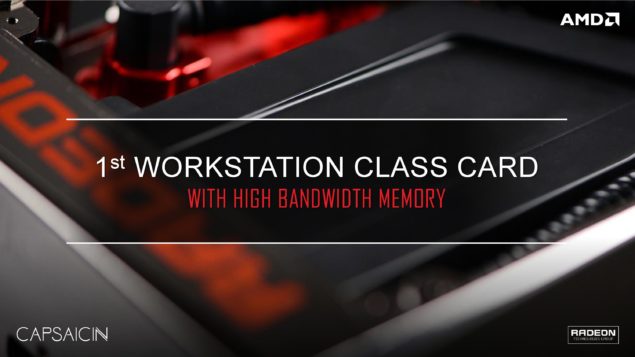 Radeon Pro Duo is just the beginning, expect more HBM GPUs from AMD and NVIDIA in 2016-2017.

Specifications of both Polaris 10 and Polaris 11 chips are leaking for a while now. The latest ones are quite juicy so do give them a look. The more surprising bit about the Capsaicin 2016 event was that the Polaris GPU wasn't going to use HBM2, the latest update to the HBM2 roadmap. AMD sighted the price of HBM2 DRAM chips as the issue right now. That's where Vega comes in.

AMD's Vega GPU Will Be a Compute Beast, FirePro and HPC APUs With High Amount of FP64 Compute Expected in 2017

In the past, we have had many details pop up on a rumored Greenland GPU. We saw it mentioned in FirePro slides, HPC APU slides, even as the fastest GCN based GPU. We now know that Greenland is in fact the Vega GPU and not just any Vega GPU, the flagship Vega 10 GPU. The whole reason that Vega has been shown as the only HBM2 graphics part leads us to believe that it will not be aimed at just Radeon graphics cards but at the HPC market. 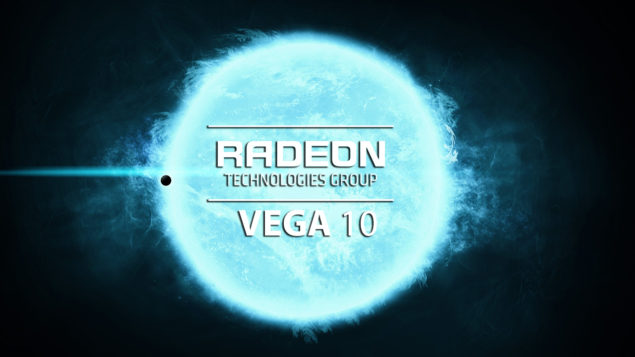 Knowing how NVIDIA will deploy their HBM2 Pascal GPUs on HPC front this year, AMD will tackle those and take a slice at HPC with their own modern day, double precision compute graphics cores. The Vega 10 GPU with next generation of HBM2 memory will be aiming at the heart of HPC computing in FirePro cards and HPC APUs. This might also prompt AMD to release a next generation successor to the Radeon Pro Duo with unprecedented amounts of TFLOPs and more power aimed at developers.

As mentioned before, the Vega 10 GPU is expected to feature as much as 32 GB of HBM2 VRAM along with 18 billion transistors crammed underneath its die that is manufactured on the latest 14nm process node. This will make Vega a true professional offering but that doesn't mean the card won't be built for gamers. As always, AMD will pay just as much attention to the PC gaming market as the high-performance market. AMD will have range of new graphics card that will deploy the Vega GPU architecture that enhance upon the performance and architecture of Polaris.

AMD Polaris and Vega Will Have Key Architecture Differences, Polaris is More Close To Fiji Than Vega

Since this article is about Vega, we might just as well let you know about some key details dug up by PCTuning Forums which reveals that the Polaris architecture, while being an updated architecture compared to Fiji is still more close to it. The While Vega 10 is part of the Graphics IP v9.0 architecture, Polaris is still part of the IP v8.0 family which is the same as current Fiji graphics cards. Following are the different architecture blocks and their respective revision number as compiled by the forum members:

Using the same LinkedIn profile we mentioned above, we came to know that AMD's Fiji is part of the graphics IP v8.0 family, the same family which Polaris chips (Ellesmere and Baffin) have also showed up to be a part of. Vega on the other hand is mentioned to be part of the Graphics IP v9.0 family which seems to be more modern than current generation of graphics processors from AMD. Although this is just speculation at the moment and AMD have shown slides that detail the new Polaris architecture having several new graphics blocks embedded with in it.

That along with the fact that AMD is getting up to 2.5x performance per watt enhancements out of their core which is something that just a process revision can't offer so it is very clear that architecture changes are made by AMD in their upcoming Polaris graphics cards. It is fine to have some hardware blocks on Polaris to be same as GCN 3.0 architecture which is also a fine tuned version of their GCN architecture. It's really getting interesting with all the leaks surrounding Polaris and Vega, we expect to hear more in the months ahead.