AMD has rolled out the Excavator architecture on G-Series Embedded Devices which will constitute the first SoCs to use the new iteration of Bulldozer.  AMD has previously shifted low power variants on the notebook side of things to Excavator and the time has come for their G-Series offerings to follow suit. Apart from that, this update to AMD's lineup also includes the new LX class of SoCs with Jaguar based cores and GCN.

AMD is planning to offer its customers the flexibility of its Lego-like lineup to tailor their solutions to their power/performance needs. The 3rd Generation G-Series lineup is designed for scalability in performance power and price. According to the specifications, the chips can handle anything from Industrial applications to some light gaming needs. Since they fully support the GPU Open and HSA environment they will offer prolonged lifespan to the customers.

Excavator is AMD's last iteration of bulldozer. The shared FPU design was one of the most debated things about the architecture of previous AMD processors. Basically, whenever the FPU was in use by a core, the other core had to wait till the FPU finished its current task – acting as a bottleneck .The rationale given behind the decision was because of space problems on the die and higher integer throughput to be achieved. With the shift to sub-20m architecture however there will be ample space in the cores for an integrated FPU. 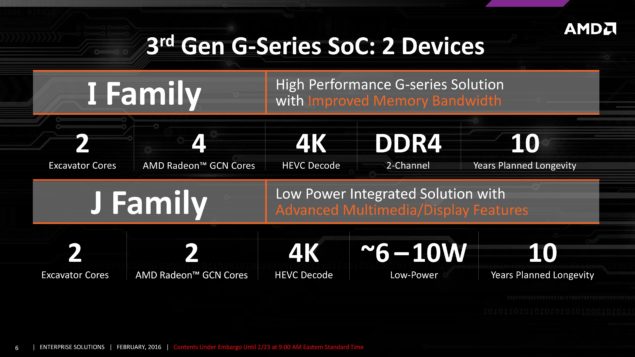 The roadmap shows that AMD launched the R-Series based Merlin Falcon in 2015 and is now expanding that lineup with 3rd Generation AMD G-Series processors divided in to Brown Falcon and Prairie Falcon. This expansion incorporates the use of Excavator just like the previously revealed R-Series. It will consist of two tiers based on the number of cores available in each SoC. The I-Family (Brown Falcon) for example will use a single Excavator Module (2 integer + 1 floating point) in conjunction with 4 GCN CUs (for a total of 256 stream processors). The IPC gains of Excavator over Steamroller will mean that these tiny devices will pack quite a punch – and be super-efficient at what they do.

The J-Family (Prairie Falcon) will be even lower powered variants with the same single Excavator module but just 2 GCN CUs. The I-Family is compatible with dual channel DDR3 or DDR4 ECC memory and has a configurable TDP of up to 15W as well as support for two SATA ports whereas the J-Family only supports single channel non-ECCC DDR3/DDR4 with one SATA port. Both tiers have 4 PCIe 3.0 lanes and 2 USB 3.0 and one USB 2.0. Both Falcon platforms have around 10 years of longevity planned for them with

AMD has also introduced a new LX class of SoCs which will be targeted towards segments involving industrial automation, military and aerospace, networking/communications and zero clients. They will house a dual core Jaguar CPU with 1 GCN CU. The platform will support single channel DDR3 and will have a configurable TDP of around 6W-15W. AMD’s G-Series will support the FT3 and FP4 sockets and are expected to have 10-year life cycles. The G-Series LX parts are based on the FT3 package while as Brown Flacon and Prairie Falcon are based on FP4.