AMD Kaveri APUs have officially been launched and now available to consumers around the globe. The 2014 AMD A-Series APU lineup consists of two new SKUs which include the A10-7850K and A10-7700K providing users with a wide variety of features inside an all-in-one package. 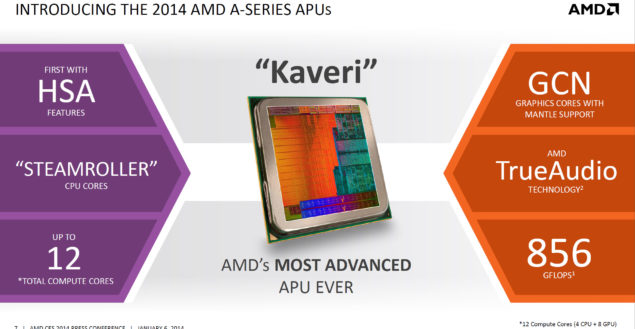 The AMD Kaveri APU is the next step into the fusion between the CPU, GPU and Memory. Powered by the latest Steamroller core architecture, the Kaveri APUs enhance the IPC upto 20% over Piledriver while GCN cores deliver increased graphics performance compared to the older VLIW based integrated graphics. Both the CPU and GPU work in harmony through the HSA enhancements which provides a unified coherent memory access to both the CPU and GPU to leverage the performance and ease the development for this platform.

The AMD Kaveri APUs are built on the 28nm SHP process measuring at 245mm2 and features a total of 2.41 Billion transistors crammed inside the die. The Steamroller core architecture is a completely new design with each module featuring two separate threads are provided with their own parallel instruction decoder. AMD's Steamroller architecture will aim to deliver faster processing power in a clock-to-clock comparison against the Richland APUs and is a step forward.

On the graphics side, we are getting the latest GCN architecture over the VLIW4 featured on previous AMD APUs. The die has upto 8 GCN compute units which feature AMD AudioTrue technology, AMD Eyefinity tech, UVD, VCE, DMA Engine and the addition of coherent shared unified memory. Being based on the same GPU as Hawaii, the Kaveri APU die has 8 ACE (Asynchronous Compute Engine) which can manage 8 Queues and have access to L2 Cache and GDS .

The most significant enhancement Kaveri would adopt is the HSA (Heterogeneous System Architecture) powered with the new HUMA enhancements which allow coherent memory access within the GPU and CPU. HUMA would make sure that both the CPU and GPU would have uniform access to an entire memory space which would be done through the memory controller. HUMA also means an increase in performance on the OpenCL front which has been a plus side for AMD based hardware. This also suggests that faster memory speeds would result in better overall performance from the graphics card.

The A10-7850K as expected would be the flagship Kaveri APU of 2014 boasting 4 Steamroller cores, 4 MB L2 Cache and clock speeds of 3.7 GHz base and 4.0 GHz turbo. On the graphics side, the APU would feature 8 Compute Units resulting in 512 stream processors clocked at 654 MHz base and 720 MHz in boost. The APU is fully unlocked allowing users to overclock the chip past the limits and supports DDR3-2133 MHz and comes in a 95W TDP package. The A10-7850K costs $173 US officially.

The A10-7700K is another unlocked chip featuring the Steamroller core architecture with a max boost clock of 3.8 GHz and base clock of 3.5 GHz. It features 4 MB of L2 cache while the GPU side ships with a GCN graphics die featuring 6 shader units equaling to a total of 384 Stream processors clocked at 720 MHz. The A10-7700K features a TDP of 95W so we may see one Kaveri APU part to feature 65W TDP. The A10-7700K costs $152 US officially.

AMD will bundle both APUs (A10-7850K and A10-7700K) with Battlefield 4 which adds $59.99 US worth of value to these products. Battlefield 4 is also EA's flagship title which will be the first to support the latest Mantle API which enhances performance on GCN hardware and multi-core CPUs to utilize their full potential. So Mantle doesn't only help code the game better for a specific set of hardware but also enhances performance for end users and gamers.

Multiple game developers have already started to support the new Mantle API and 20 titles which actively support the API are currently in development. Titles such as Thief and Lichdom would be among the first to feature TrueAudio tech which delivers rich and pure surround sound quality by shifting the audio processing load from the CPU over to DSPs integrated on the GCN architecture. Overall, the Kaveri APUs are feature rich and a ready for gaming package available for a cost under $200 US. 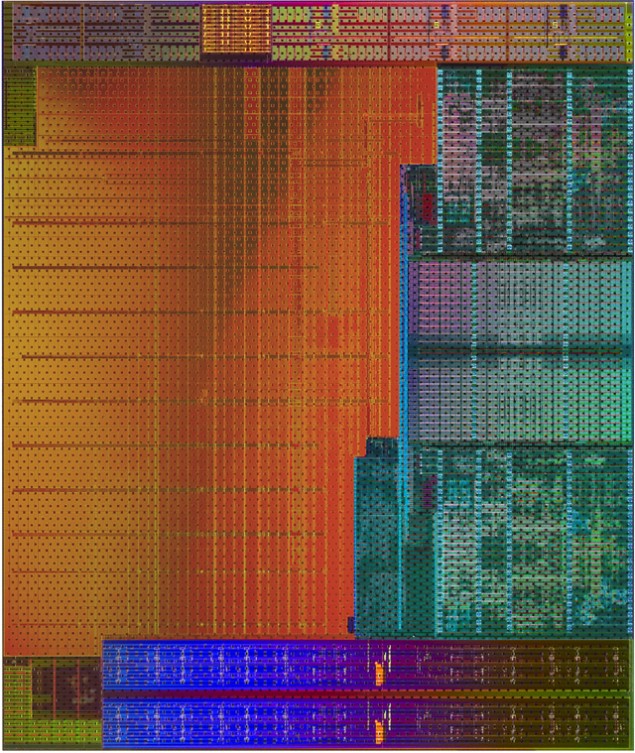 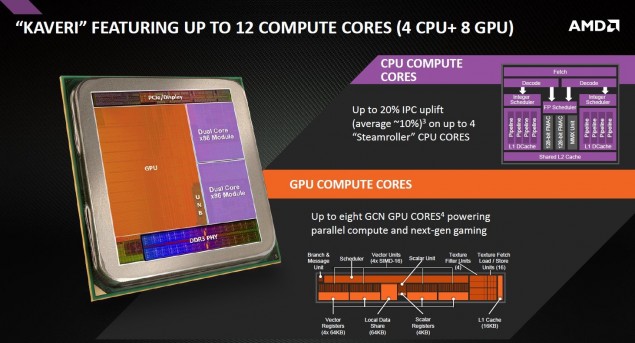