For AMD, nearly everything hangs in the balance with Zen. The upcoming x86 micro-architecture has to succeed, there is no other option, if AMD wants to continue operating. Recently, the legendary Jim Keller also left the company, so there were concerns of whether there would be any effect of Zen. The fears were immediately assuaged by AMD stating that they are on track for a few more years before the departure of Jim has any effect. A recent report published by the “My Statesman” provides helpful insight on the Zen situation. 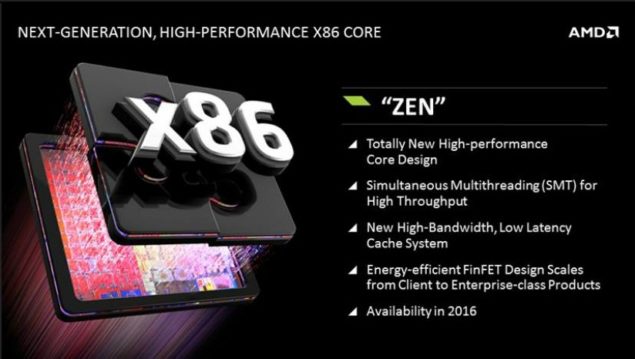 It seems that the entire Industry realizes just how much important Zen is to AMD. Infact, considering the financial trouble it is in, Zen is currently, AMD's last ditch effort for a turnaround.

“Everything is riding on Zen. They are shooting for performance parity with where (arch-rival) Intel will be. AMD understands that they have to succeed with Zen. If Zen fizzles, they will really have to do a lot of running around.” - Nathan Brookwood, Insight 64

“It is the first time in a very long time that we engineers have been given the total freedom to build a processor from scratch and do the best we can do,” said Suzanne Plummer, a director of design engineering at AMD and a veteran Austin chip engineer heading the "Zen" development team.
"it is a multi-year project with a really large team,” said Ms. Plummer. “It’s like a marathon effort with some sprints in the middle. The team is working very hard, but they can see the finish line. I guarantee that it will deliver a huge improvement in performance and (low) power consumption over the previous generation.”

These remarks of Suzanne Plummer, a very important member (if not the important memeber) of the Zen team, help offer some insight into what we can expect from Zen. Considering her enthusiasm and confidence, I think its safe to say that the leap between generations will be pretty enormous. I think it has been proven pretty much proven beyond reasonable doubt that Zen will be a major upgrade over last generation AMD CPU architecture, but the question, that still remains to be answered is whether they will turn out to be a competitive force for Intel.

We had previously heard that AMD will be making a plethora of changes including changing to SMT and adopting a single FPU per core design - both things which will put it on track to be a competitive force with Intel processors. That’s not it either, Zen will be using a scheduling model that is similar to Intel’s and it will use specific hardware and simulation to define any needed scheduling or NUMA changes. It will also be ISA compatible with Haswell/Broadwell style of compute. It will bring various compiler optimisations, including GCC with target of SPECint v6 based score at common compiler settings. Benchmarking and performance compiler LLVM targets SPECint v6 rate score at performance compiler settings. Each Zen core will have access to 512KB of L2 cache and 4 Zen cores will share 8MB of L3 cache.