Microsoft & Sony are launching new 4K & VR capable gaming consoles next year & why this means AMD's FreeSync is now more important than ever.
The cat is now officially out of the bag, Microsoft announced earlier today at its E3 conference Project Scorpio. A next generation gaming console with over four and a half times the performance of the company's current XBOX One game console.

Excerpt from Microsoft's E3 Press Release
Project Scorpio. Coming Holiday 2017, Project Scorpio will be the most powerful console ever created, with 6 teraflops of GPU delivering a premier console gaming experience including true 4K gaming and high fidelity virtual reality. Project Scorpio will join the Xbox One family and coexist alongside Xbox One and Xbox One S and all of your Xbox One games and accessories are compatible.

With an 8 core CPU and a monstrous GPU rated at 6 TFLOPS of horsepower, the XBOX ONE X simply eclipses the 1.23 TFLOPS XBOX ONE. Sony's own 4K & VR ready Playstation Pro game console also represents a considerable jump from its original PS4 device. With a 4 TFLOPS GPU and 12GB of memory instead of 8, developers have a lot more to work with.

Now, what exactly does this have to do with AMD or FreeSync you may wonder. What's even FreeSync you may ask. Well let me fill you in on a few crucial but seldom talked about issues here. The challenges in developing games for consoles go beyond learning and understanding the peculiarities of the hardware.

Games, as many developers would attest to, are among the most complex and sophisticated pieces of software we've come to know. They are living breathing entities in their own rights and this poses a genuinely difficult challenge to developers. One that's compounded by the fact that it all has to be molded into a fixed 30 or 60 FPS experience for the gamer.

I will spare you the details that go beyond the scope of this article but in a nutshell, attempting to force the incredibly complex game worlds of today's games to adhere to a fixed framerate is like trying to tame a lion. It's extraordinarily challenging and any failures or hiccups will lead to catastrophic outcomes. FreeSync, solves all of this.

Unlike V-Sync, which is the technique used to force the framerate of your game to stay in sync with your monitor's refresh rate by capping it to a fixed 30 or 60 frames per second. FreeSync enables the display to simply run at a dynamic refresh rate and actively match the game's variable framerate To understand why this is so crucial we have to understand why V-Sync is used in the first place. Traditional displays, including the TV you have hooked up to your game console or home theater PC right now, deliver images at a fixed rate. Be it 60 times every second, 30 times a second or even up to 144 times a second on high-end gaming displays.

As we've established above, games simply do not work this way. The hardware inside your gaming device be it a console or a PC is always working to process & deliver gameplay images "frames" as fast as it possibly can. Modern games have an incredibly wide variety of environments and scenes, some of which are naturally far more visually and computationally intense than others. Which is why framerates can vary greatly from one moment to the other, as some frames will take more time to process and display.

This makes the framerate of modern games inherently sporadic, while your display's refresh rate is the very opposite of that. To address this disparity and to display each frame at a fixed rate, a technique we've already mentioned called V-Sync is used. Vertical Sync, as the name implies, syncs every frame with the vertical refresh rate of your monitor. It works by making each frame wait for the next refresh cycle and then draws the frame on the display as soon as the cycle starts. Making sure that every frame is always in sync with the display's refresh rate.

This solves the issue of screen tearing. Which occurs when a frame is displayed in the middle of the display's refresh cycle rather than at the beginning. On a 60Hz display, which are the vast majority out there, going above or below 60 frames a second will lead to screen tearing.

While V-Sync solves the tearing issue it comes at a major cost to the quality of your gaming experience. Because the display has to refresh the image at very specific time intervals, if the game's framerate dips below 60 FPS momentarily the display is forced to "skip" a frame, sometimes more. This happens whenever it takes too long to process any given frame. The display simply can't wait for it, it has to refresh. So it displays the previous frame again instead of waiting for the last frame to be processed.

Displaying the same frame twice essentially means that the you're playing at half the framerate. A smooth 60 suddenly becomes 30. Cutting the rate by half this rapidly produces noticeable stutter and lag that's very detrimental to the fluidity of the image. Worse yet, if you're playing at a fixed 30 FPS and it dips by a single frame to 29, it will go down to 20. That's because the same frame has to be displayed three times in a row at 16.6ms intervals. This is downright horrific and can completely ruin the gaming experience. Many of us can cite the numerous times we missed a shot or a critical action in a game that resulted in our character dying for no fault of our own but because the game "lagged" or "stuttered". Which can be unbelievably frustrating.

FreeSync technology enables displays to operate dynamically, and display frames whenever they're actually ready rather than doing it at a fixed rate.  This simultaneously solves the issues of lag/stutter and tearing. If you're playing at 60 FPS and the game's framerate dips down to 59, it actually goes down to 59 not 30. No more skipped frames, input lag or awful judders. Furthermore, because game developers no longer have to adhere to the strict 30 or 60 FPS limits they can afford to be far more creative. It allows them to build more complex game worlds and simply make better games.

If you want to read more about variable refresh rate technology & how it works you can check out our in-depth editorial where we break down everything concerning AMD's FreeSync & the comparable solution from Nvidia called G-Sync.

FreeSync Over HDMI Means Smooth Gaming For All!

Here's the good news. FreeSync as the name implies is actually completely free. It doesn't require any special hardware and there are no fees, licensing or otherwise, required to implement it. The AMD hardware in current game consoles is compatible with the technology. The upcoming Playstation Neo & XBOX Scorpio will undoubtedly support it as well. More good news is that FreeSync no longer requires a DisplayPort connection, AMD has brought it to HDMI late last year. 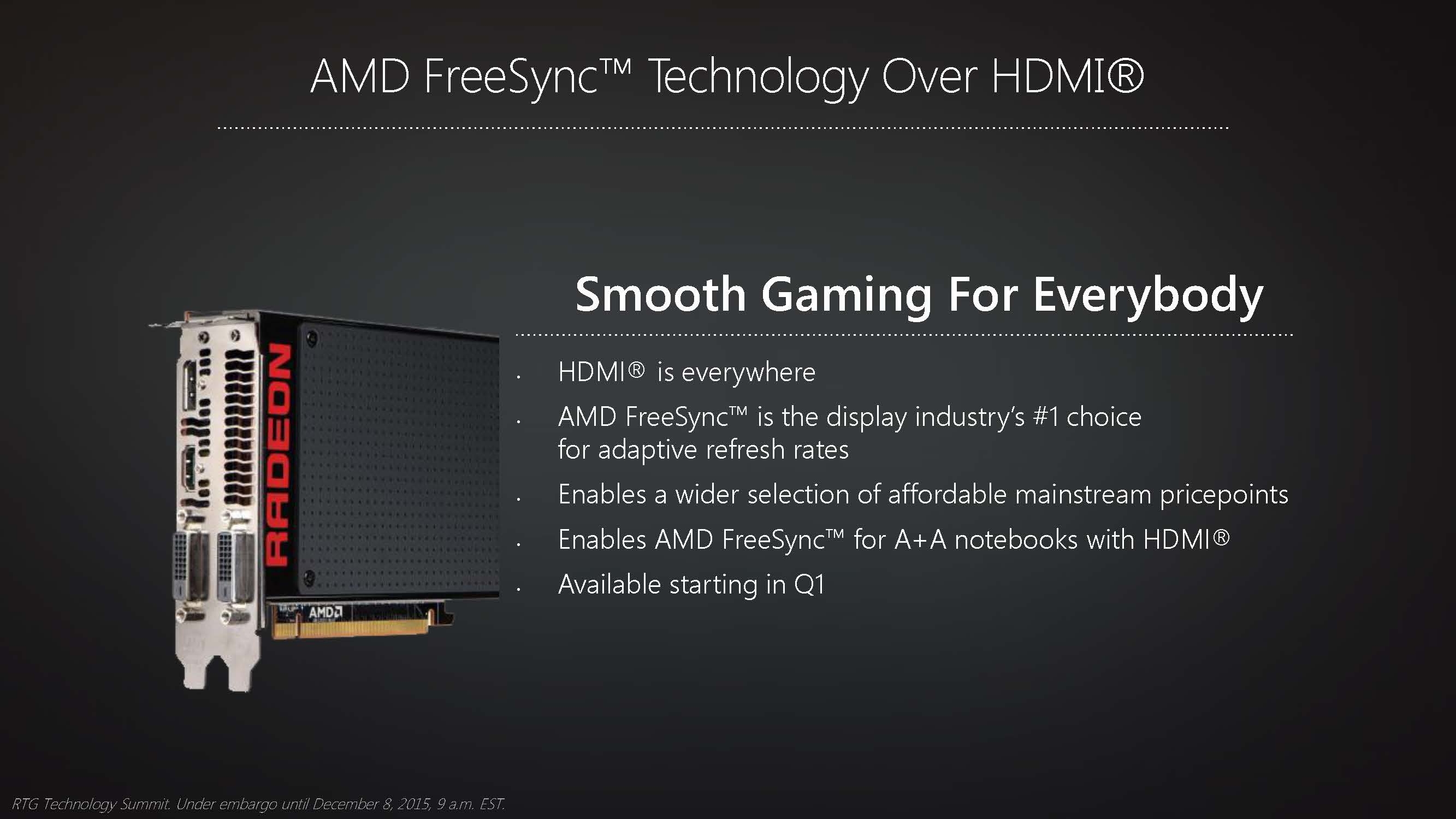 There are now tens of HDMI & DisplayPort FreeSync monitors on the market. Bad news is HDMI doesn't "officially" support the Adaptive Sync feature that FreeSync relies on to actually work. DisplayPort 1.2a and newer iterations on the other hand do. The current FreeSync via HDMI option is thus an ad-hoc solution, one that AMD has made a lot of effort to deliver to the market. This is why we haven't seen nearly as many HDMI FreeSync monitors as we have seen with DisplayPort.

Bringing Adaptive Sync over to HDMI and thus to the masses of console gamers and home theater PC owners is an absolute necessity at this point. And perhaps the most important industry wide move forward in gaming and display technology in decades. It's then clear that AMD's efforts to bring FreeSync to HDMI were well calculated and far-sighted. Why exactly we haven't seen HDMI pickup Adaptive Sync to date and make it officially part of the spec is a head-scratcher.

Although have no doubt, it's simply going to be a matter of time before every console gamer and HTPC owner can enjoy this incredible technology on their TV from the comfort of their couch. 4K is exciting yes, but If we end up with a stuttering juddering mess that we can't possibly enjoy then why bother at all. If you have ever had the opportunity to game on a variable refresh rate monitor then you know exactly how big of a deal it is. If you haven't then I urge you to try it, it's truly eye opening.