Big news for the Graphic Card industry. AMD's ATI Radeon 5000 series GPUs are expected to launch on September 10 via a private event we talked about earlier. The news though still not officially announced in this context - did originate from AMD themselves. They dropped the tip indirectly via a presentation slide which was given at Quakecon 09, along with a video demoing some of the DirectX 11 features. 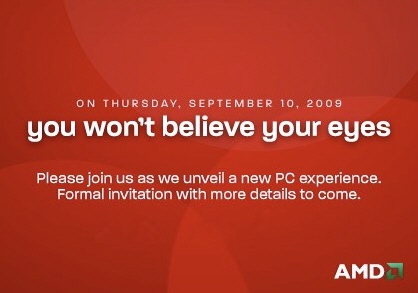 As the slide reads, AMD plans to reveal a brand new experience on September 10 - just a day before my birthday. By simple logic, the only known AMD experiences that could be unveiled at that time are its ATI line of GPUs from the Evergreen series. That might be just the top end products - the Radeon 5800 line, or it might include the new Radeon 5700 mainstream processors and the official successors to the widely acclaimed Radeon 4770.

And if you're wondering what's so cool about DirectX 11, then the video below sums it up under three points: Hardware Tessellation, Compute Shader and support for multithreaded processing to take advantage of those hundreds of stream processors. Oh and if you've got a sharp eye, you'd notice that the monitor to the left in the video is running a demo version of Wolfenstein.