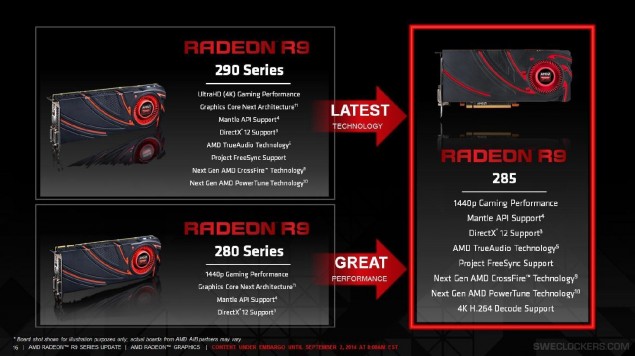 The AMD Radeon R9 285 graphics card launched back in August 2014 for a price of $249 US. Based on the Tonga core architecture, the Radeon R9 285 was thought to feature higher performance and an efficient design that would rival NVIDIA's Maxwell GPUs however it wasn't as efficient but had some features which leveraged performance in the form of conservative use of bandwidth through color compression technology, an updated instruction set, improved geometry processing and slightly lower power consumption than Tahiti chips. A few other things included full support for TrueAudio, Freesync and DirectX 12 API which are going to be an essential use in the upcoming months when new AAA titles launch.

The main specifications of the card included 28 compute units which features 1792 stream processors, 112 texture mapping units and 32 raster operation units. At one point, these specification seemed similar to the Radeon R9 280 and the card was indeed just about similar in performance to the R9 280 and stood below the R9 280X in pure performance numbers. The card included a 2 GB GDDR5 VRAM along a 256-bit bus compared to a 3 GB GDDR5 and 384-bit bus which the Tahiti cards featured at the same time. This meant that the card was slightly expensive then cards which were already available prior to launch. The price cuts come a bit late since NVIDIA has already caught the market share with their $200 US GeForce GTX 960 and the Radeon R9 280 is selling for under $190 US.

However, AMD users now can lean towards the Radeon R9 285 instead of the GTX 960 and R9 280 since it offers more performance. The new architecture design will undoubtedly help the Tonga core to be further optimized and utilized with next generation AAA titles and compared to the GTX 960, it features a better memory bus which results in better texture processing and further features a robust geometry processing engine. We won't see the full Tonga chip launch in the 200 series from AMD but we can expect another round of Tonga cards in the upcoming Radeon R300 series family which is expected to launch in the next few months. As for the pricing, it has been stated that the Radeon R9 285 is now retainling for $200 US officially.