Forbes' Jason Evangelho sparked a new trend on twitter by posting a picture of himself cuddling with an AMD Radeon R9 Fury X. Quickly afterwards he issued a challenge to another twitter user, asking him to post a picture of himself cuddling with a graphics card. The chain of challenges continued until it reached AMD's Roy Taylor who decided to donate $2 for every such photo posted on twitter. 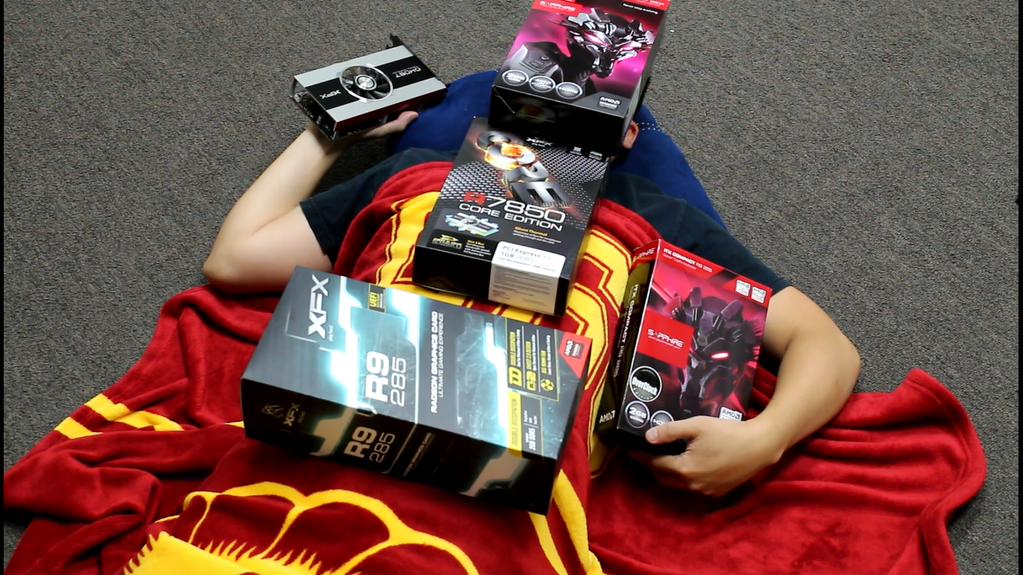 Little did anybody know that this would soon become an actual "thing" that people do on twitter. The hashtag #GuysCuddlingWithVideoCards is now trending on twitter. Fans will do crazy things and hardware enthusiasts are the most well, enthusiastic. It was a fun silly thing when it started, now it has evolved into a charity gig which is cool.

UPDATE :
Jason Evangelho recived a $10,000 donation in support of this movement.

If someone hasn't created a "Women cuddling with graphics cards" Tumblr, I respectfully request that they do so immediately.

.@killyourfm We would also like to join the movement #GuysCuddlingWithVideoCards with @amd_roy Same rules but with a $125 Max 🙂 <3

From my friend Jayce on Facebook. This one is just glorious. #GuysCuddlingWithVideoCards #Nvidia #ForCharity pic.twitter.com/m9VPSMTl8Q

Both AMD and Nvidia fans have jumped on the #CuddlingWithVideoCards bandwagon and the num
ber of tweets is climbing quickly. If you want to empty Roy Taylor's wallet all you've got to do is post a photo of yourself "cuddling" with your graphics card.

The donations will go to the @ExtraLife4Kids charity. You can visit the Extra Life website by clicking on this link.

Extra Life began in 2008 as a way of honoring a young lady named Victoria Enmon. Tori’s battle against acute lymphoblastic leukemia inspired the Sarcastic Gamer Community in a way that is difficult to describe. Members sent in video games and bought gifts to keep Tori’s spirits up despite numerous hospital stays and three bouts with the deadly disease.

Tragically, we lost Tori to cancer in January 2008. Later that year, I asked my partners at Sarcastic Gamer if they would be interested in Extra Life, a 24-hour video game marathon to raise money for the hospital that treated and fought beside Tori. In 2008 and 2009 Extra Life raised a combined $302,000, 100 percent of which went directly to help kids like Tori at my local Children’s Miracle Network Hospital (Texas Children’s Hospital).

While thousands of gamers, more than 100 websites and more than 12,000 donors were happy to support Extra Life, many expressed their desire to raise money to help kids closer to home. In what I can only consider destiny, in 2009 I left behind my radio career and went to work full-time for Children’s Miracle Network Hospitals as a Radiothon Director. This life-changing event gave me unique insight into an incredible non-profit organization that helps kids all over the United States and Canada.

I quickly realized that Children's Miracle Network Hospitals would be the perfect solution to expand Extra Life into more communities.

This year, when you sign up to play games for 24 hours this year, you won’t just be raising money for kids. You’ll be supporting LOCAL kids and their families. Kids right in your own backyard.

All the money you raise for Extra Life 2015 will go directly to the Children’s Miracle Network Hospital of your choice.

Do you want to have more fun than you can handle while helping some of the bravest (and smallest) warriors in your community? All you have to do is:

I also encourage you to learn more about your local Children’s Miracle Network Hospital and to meet some of the kids we’ll be working to help.