Update - AMD has officially launched their catalyst omega drivers. Our full coverage on the latest drivers can be found at the following link:

AMD has officially unleashed their latest Catalyst Omega drivers which are considered as a "special edition" driver, aimed to enhance performance across AMD GPUs and APUs while adding several new features along with bug fixes. The AMD Catalyst Omega drivers. Some of the new features include the new 4K Virtual Super Resolution technology and Detail Enhancement 2 which will provide better in-game image quality. 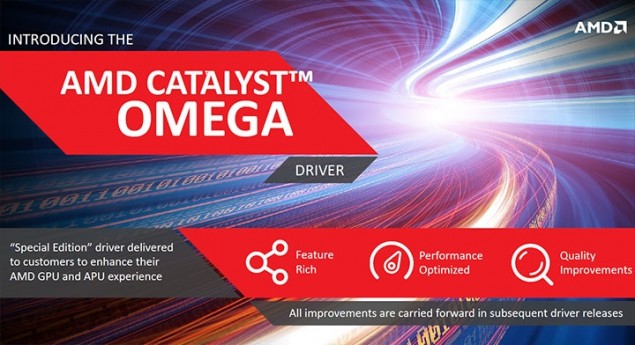 While the drivers adds 20 new features which we will detail in this article, it also fixes several bugs and helps improve performance in several titles, enhancing Crossfire support and delivering Freesync support in current and upcoming gaming titles. All the improvements from previously released drivers are carried over to the new ones while adding new features. On the performance side, we are looking at a improvement across a wide range of products such as the AMD Kaveri APUs and Radeon R7 / R9 series GPUs. Some performance numbers show that the Radeon R9 290X is now rated at a 19% more performance since its launch press drivers and the same can be expected across the rest of the Radeon lineup family consisting of Radeon R9 280 (X), 285, 270 (X), R7 265, 260 (X), 250 (X).

One of the new features introduced by AMD is Virtual Super Resolution, you might have heard that name before? No? I'll give you a hint, DSR. Yes, AMD's VSR is similar to NVIDIA's DSR which is a new downsampling technology that allows games to run at 4K quality detail on a 1080P screen monitor. The end result of this is smoother textures and edges, better image quality and helps simulate Super Sampling Anti-Aliasing (SSAA) for console ports that don't support the technology. This helps in titles where the games are hard locked to 1080P resolution and have little to no AA options in the configuration settings. Just like NVIDIA's DSR, VSR can be enabled for any title through the AMD Catalyst Control Center. 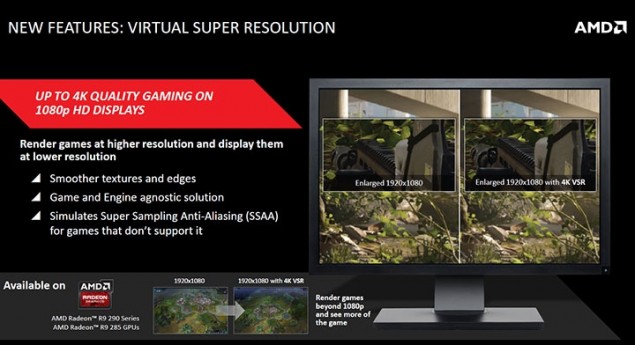 AMD also adds 5K monitor support which have a pixel density of 14.7 Million pixels (218 pixels per inch). The 5120x2880 (5K) monitors such as the Dell UP2715K come with dual display port 1.2 inputs. Another technology support AMD has added is Freesync which is AMD's own version of the G-Sync expect more open in nature and doesn't require any additional hardware to deliver tear free gaming. In our recent interview with AMD, we got the following comments from Robert Hallock on Freesync: 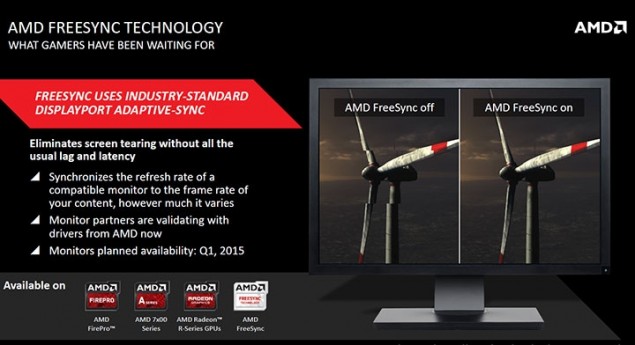 Robert: VESA DisplayPort Adaptive-Sync is an open standard that allows a graphics card to control the refresh rate of a display. AMD proposed the amendment to VESA, and it was recently ratified in the DisplayPort 1.2a specification. DisplayPort Adaptive-Sync is a framework that requires a GPU-side technology to provide the user-facing benefits (such as smooth, tearing free, low-latency game play), and FreeSync is AMD’s “secret sauce” to do that. The secret sauce is one part hardware (display controllers) and one part software (AMD Catalyst™). Because FreeSync is based on open standards, it invites all vendors to participate and charges no licensing fees for adoption. That certainly encourages lower end-user costs vs. G-sync, which is locked and licensed. FreeSync and DisplayPort AdaptiveSync capability can be integrated into a monitor’s scaler chip, without the need for proprietary hardware modules. That too encourages lower end-user costs vs. competing technologies.

The monitors begin shipping in 1H of 2015 so we will see where it goes on from there. As for other tech, AMD also added the new 1080P detail enhancement 2 mode which essentially helps increase details of a lower res video to make it feel like a 1080P video. It takes a original video sample and processes it in 1080P that improves frequency response. The drivers will be available to download shortly and we will link them here as soon as they are up on AMD's official site here http://support.amd.com/en-us/download.