AMD today announced the availability of its fastest Mobile GPU chip yet, The "Radeon HD 6990M". The chip ain't only AMD's fastest but is currently the world's fastest Mobile Graphics solution after the Nvidia GTX580M (DX11) chip which was also released a while ago.

Unlike the Dual Core 6990 GPU, The Mobile solution consists of a single HD6870 Core which is 40nm based consisting of 1120 Stream Processors and runs at 715Mhz Stock Speed. Features include DirectX 11, HD3D, and Eyefinity CrossFireX. The card has a total of 2GB GDDR5 memory running at 900Mhz along a 256-bit wide memory interface. The card has a total computation power of 1.6Teraflops and has a total memory bandwidth of 115.2 GB/s. 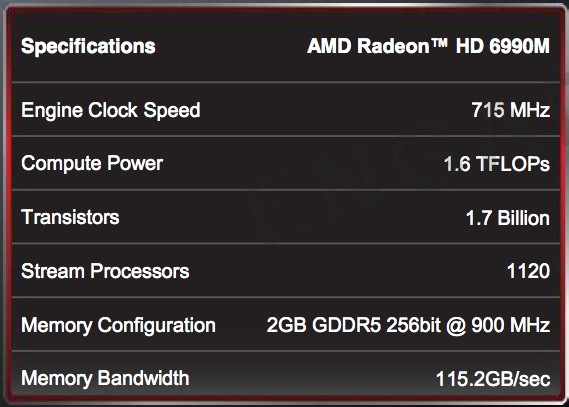