All new Benchmarks of AMD's Upcoming Bulldozer Processors have been revealed over at Vr-Zone Forums. The Upcoming Zambezi FX Processors would be support on the AM3+ Socket Motherboards (Backward Compatible with AM3 CPU's) featuring the 990FX and SB950 Chipset.

The CPU Tested here include the Upcoming Eight Core 32nm Based FX-8120 which would feature a 3.1Ghz Stock Speed with Turbo Core Frequency of 4.0Ghz, 8Mb L3 Cache and 125W TDP. FX-8120 (221.73$) along with two other Bulldozer Processors are already available for Pre-Orders which you can see here.

The CPU-z Reported an idle frequency of 1.4Ghz which means the CPU was in C6 idle state and also a buggy TDP of 174W. This would be fixed with the updated version of CPU-z after the Processors are released. Also the CPU-z reports the CPU to be Stepping 2 which means that this is indeed the final B2 stepping retail chip. Benchmarks below:

Compared to the Quad Core Intel's i7 860, Bulldozer still ain't ahead much. The Per Core Performance is still relatively lower, Let's hope for better performance in the final chip. Another Screenshot from the forums show a FX-6110 chip overclocked to 4.7Ghz @ 1.416V. Screen below: 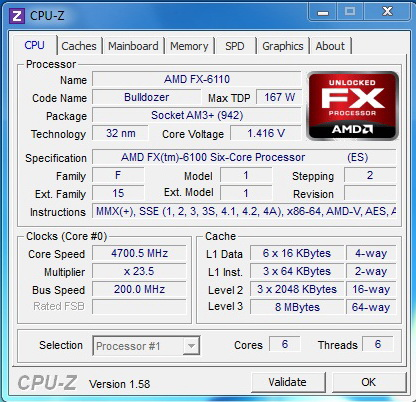 AMD has also postponed its Bulldozer launch to Q4 2011 according to few sources however September 19th Launch is still alot likely.