Only a few minutes ago, we posted an article detailing the performance and pricing of AMD's upcoming Kaveri APUs. Now we have new details regarding the specifications of two Kaveri A-Series SKUs - A10-7850K and A10-7700K.

The clock speed of the APU is maintained at 3.7 GHz which is presumably the base clock while Turbo clock would push the speeds beyond 4 GHz barrier. The GPU which is positioned in the R7 2**D series is clocked at 720 MHz while the APU itself has 4 MB of L2 cache. The GCN graphics die would feature 8 GPU cores which represent a total of 512 stream processors. The TDP for the A10-7850K would be set at 95W. AMD A10-7850K will support both Mantle API, DirectX 11.2 and OpenGL 4.3 and feature dual graphics functionality with the AMD's Cape Verde based discrete GPUs.

Next up, we have the A10-7700K which is another unlocked chip featuring the Steamroller core architecture with a max boost clock of 3.8 GHz and base clock of 3.5 GHz. It features 4 MB of L2 cache plus HSA features and True Audio technology support. The GPU side ships with a GCN graphics die featuring 6 shader units equaling to a total of 384 Stream processors clocked at 720 MHz. This part may possibly feature a lower TDP of 65W due to the cut down graphics die but still pack a mean punch in terms of performance.

The AMD Kaveri A10 series which include the A10-7850K and A10-7700K  would be released on 14th January 2014 on the desktop FM2+ platform. The prices would be set around the sub-$150 range as just recently revealed. New information, details and performance benchmarks are expected around CES 2014. 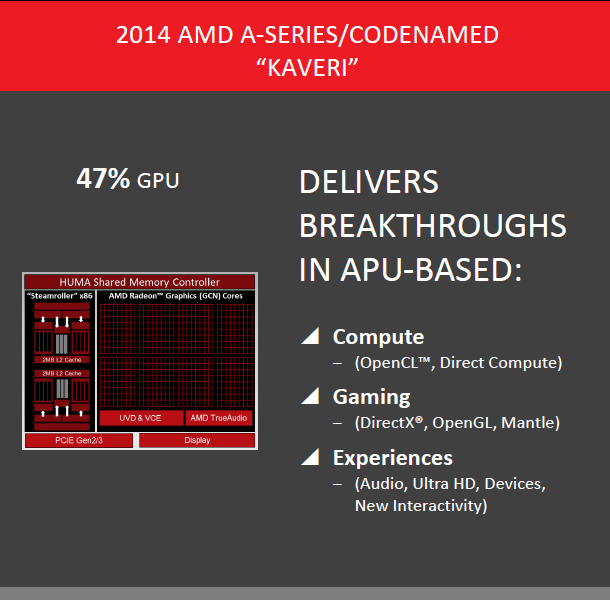