AMD has officially popped the lid and announced various key details of their next generation Kaveri APU. The A-Series Kaveri APUs from AMD would be branded as the A10/A8/A6/A4-7000 series and would replace the current A10/A8/A6/A4-6000 series 'Richland' APUs. 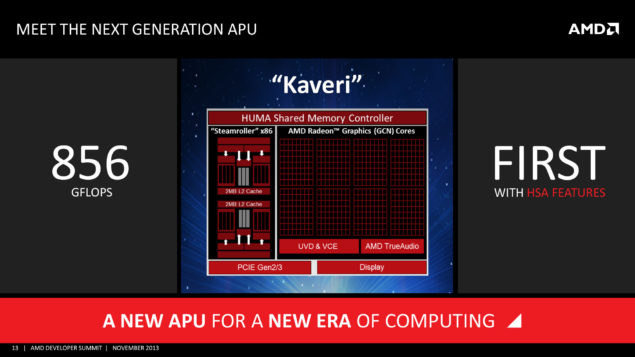 AMD showed various slides of their upcoming Kaveri generation of APUs confirming our previous reports such as the Kaveri APU featuring a GCN core architecture, the brand new 28nm Steamroller core architecture and HSA enhancements which would make development an ease on the new platform. The Kaveri APU would stick to the FM2+ socket for desktop PCs and would arrive on the desktop platform first with initial availability beginning from 14th of January 2014. We have already seen several FM2+ socketed products from manufacturer's which can be seen in the following links:  MSI, ASUS, ASRock, Gigabyte, BioStar

Coming to the architecture details, the AMD Kaveri APU features a full blown Steamroller core architecture with upto four multi-threaded x86 cores which are specifically designed to expand computation efficiency, improve the single core execution and feed the cores faster. We are looking at Quad Core APUs in the Kaveri generation which would be multi-threaded and upto 4 MB of L2 shared cache. Steamroller is AMD's first big core in some time that would feature the 28nm core process and would essentially mean lower power consumption while pumping out a better IPC rate over Piledriver and Bulldozer.

On the graphics side, AMD would fuse their past flagship GCN core architecture inside the Kaveri APU. The Kaveri APU can hold upto eight GCN compute units with powerful parallel compute and next-gen gaming capabilities. In addition to these, GCN would have the ability to support DirectX 11.2 and OpenGL 4.3 so overall we are looking at richer gaming experiences that would be delivered with the Kaveri APU and technologies such as TrueAudio and AMD Mantle further boosting the visual experiences of gamers.

The last significant enhancement Kaveri would adopt is the HSA (Heterogeneous System Architecture) powered with the new HUMA enhancements which allow coherent memory access within the GPU and CPU. HUMA would make sure that both the CPU and GPU would have uniform access to an entire memory space which would be done through the memory controller. This would allow additional performance out of the APU incase the GPU gets bandwidth starved. This also suggests that faster memory speeds would result in better overall performance from the graphics card. Now with all the architectural talks done, let's get on with the A10-7850K itself.

The AMD A10-7850K is presumably the flagship Kaveri APU for 2014 which would replace the Richland A10-6800K APU. The A10-7850K has four Steamroller cores and 512 GCN stream processors which bring its performance on a level equivalent to the Radeon HD 7750 in terms of graphics performance. The A10-7850K has a max compute of 856 GFLops which is impressive yet slightly lower than the 1 TFLops class APU AMD mentioned a few months back

The clock speed of the APU is maintained at 3.7 GHz which is presumably the base clock while Turbo clock would push the speeds beyond 4 GHz barrier. The GPU which is positioned in the R7 series is clocked at 720 MHz while the APU itself has 4 MB of L2 cache. AMD A10-7850K will support both Mantle API, DirectX 11.2 and OpenGL 4.3 and the possibility of it ending up as a Dual GPU solution with the AMD Radeon R7 260X remains very high and if it happens, then it would mean a very price to performance minded platform for gamers and desktop users. 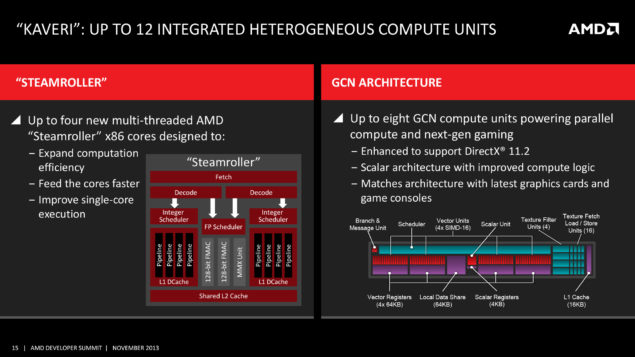 Hothardware saw a demonstration of the Kaveri APU with the same A10-7850K sample running Battlefield 4 at 1080P and medium details at a frame rate between 28-40 FPS. The Core i7-4770K on the other hand which is Intel's top dog only managed 12-14 FPS which is a definite lead for the APU platform. Hopefully, performance would improve a bit more given the new drivers at launch along with enhancements in Mantle and DirectX 11.2 API.

For performance, AMD showed Kaveri up against the Intel 4770K running a low-end GeForce GT 630. There are three variants of this particular card -- it's not clear which AMD utilized -- but the overall performance figures are rather stark. In the intro scene to BF4's single-player campaign (1920x1080, Medium Details), the AMD Kaveri system (with no discrete GPU) consistently pushed frame rates in the 28-40 FPS range. The Intel system, in contrast, couldn't manage 15 FPS. Performance on that system was solidly in the 12-14 FPS range -- meaning AMD is pulling 2x the frame rate, if not more. HotHardware

AMD has also planned more details for CES 2014 so this covers up the announcements made at the Developer Summit. AMD Kaveri APU would intially launch for the desktop platform in January 2014 while arriving later for the Notebooks, Embedded and Server Products. Do stay updated for more information. 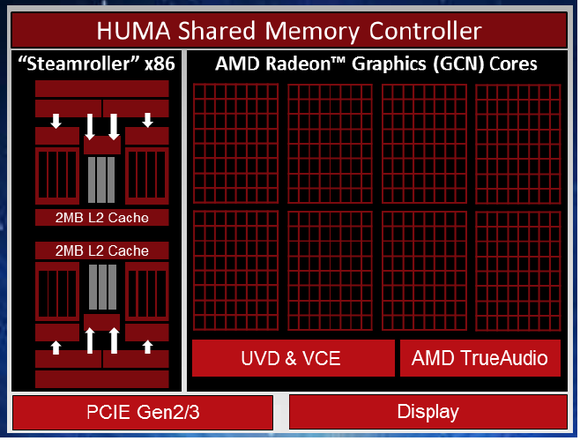 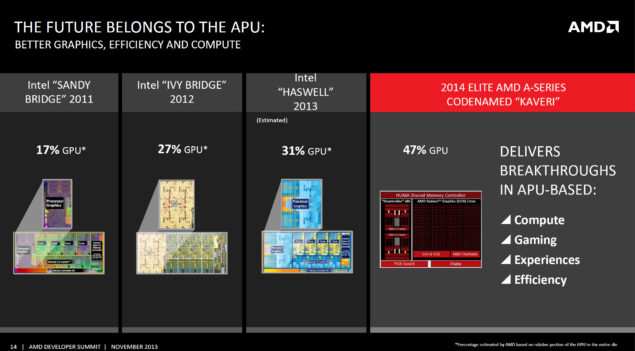 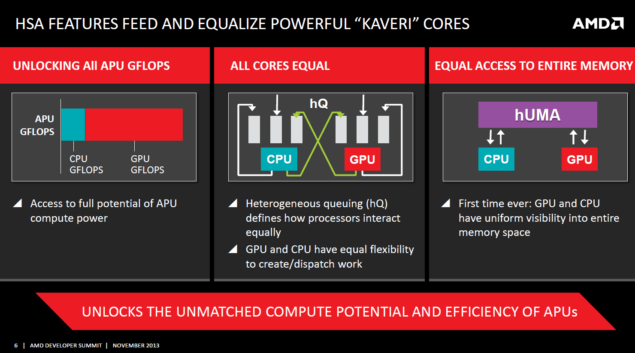 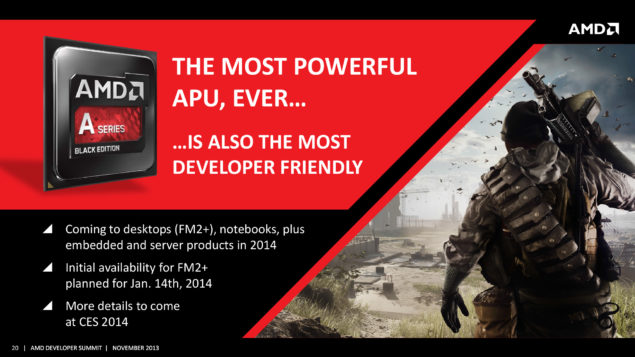 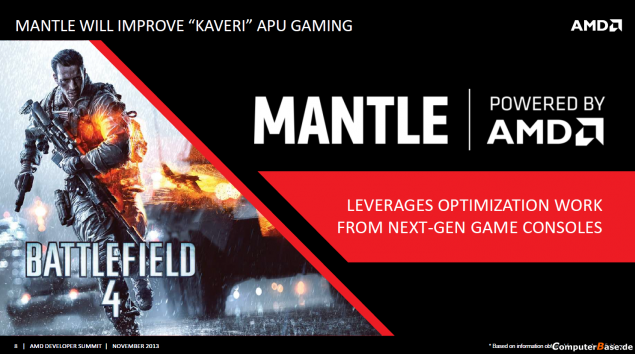 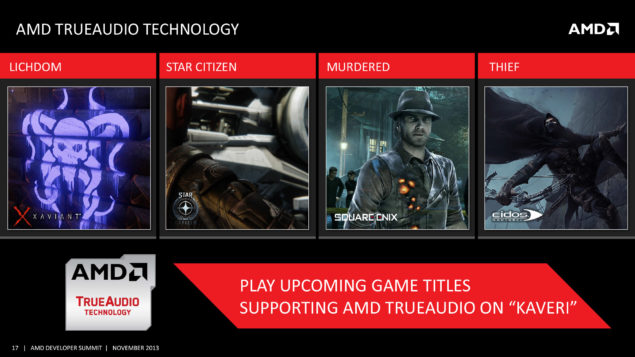