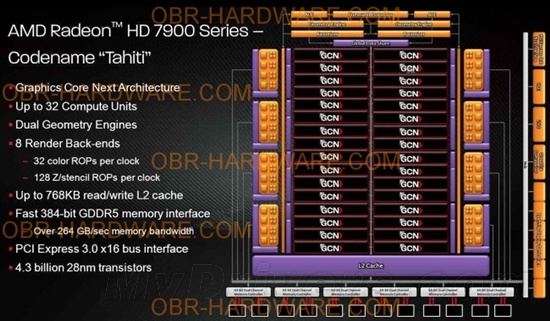 Official documents of the AMD Tahiti 7950 have surfaced from a hardware enthusiast forum by the name of PCINLIFE.

As per the details of the forum listing, they are as below:

1. Tahiti Radeon HD 7900 with two Geometry Engine (ACE), but under the jurisdiction of their 16 "GNC QUAD SIMD ", also known as computational units, that can be simply interpreted as 16 SIMD array. Each array has 64 stream processing cores.

2. A total of eight back-end rendering, to complete the 32 week period the color operation, 128 Z-Stencil operations.

4. Has been equipped with 384-bit memory bit wide GDDR5 particles can exceed the bandwidth of 264GB/s.

6. The number of transistors 4.3 billion.

8. Tessellation part is clearly up to Gen8 (6900) four times the performance of Anisotropic Filtering is basically and 6900, but the new improved high-frequency texture flickering problems. Double-precision performance of 947 GFLOPS, to achieve the DDR, SRAM full ECC.

9. Multimedia instruction, the introduction of QSAD, MQSAD, each cycle can be achieved for each CU 256 pixels perform SAD operation, the entire down the equivalent of 7.6 Tera pixels per second. Software, WinZip 16.5 will offer OpenCL support (e.g. AES), which are also described in the slide area PowerTune.

1. AMD specifically described in the document like MegaTexture (massive texture) the part of the resident texture (Partially Resident Textures / PRT) technology , but this is a hardware implementation, including mapping, filtering and other operations, the maximum grain size up to 32TB , which is then multiplied by the cube of 128KB 128-bit.

5. The introduction of multimedia instruction in QSAD, MQSAD, and each cycle of each cell can perform 256-pixel SAD operation, the overall execution down the equivalent of 7.6 trillion pixels per second.

6. Software, WinZip 16.5 OpenCL support will be provided, such as AES.

The introduction of a more a more granular power control, based entirely on digital technology, independent of the driver and configuration files.

In the "black" state or PC into idle mode, GPU core state into the 0 watts, the fan will turn off, CFX configuration, when this technology is very attractive 7970 TDP is about 210 watts, 7950 is be yet determined .

Do check out our other links posted below for more on AMD's 7900 series: