Some official slides from AMD have been exposed which detail more information on the upcoming Southern Island based HD7900 Series "Tahiti" which are expected to launch on December 22nd 2011.

According to AMD, The HD7970 "Tahiti XT" would be the world's fastest Graphic Card featuring a 28nm design. Hopefully that would be true until NVIDIA launches its next generation Kepler based cards in Q2 2012.

The HD7970 would feature 2048 ALU's, GCN Core Architecture, 128 Texture Units, 32 ROP's and a 3GB GDDR5 Memory running across a 384-bit wide interface. The 3GB Memory would allow the card to offer great improvement in Multi-Display and Eyefinity Setups. Display outputs will include DVI, HDMI, and 2 MiniDisplay Ports. Power would be supplied through a Six Pin and 8 Pin Connector. 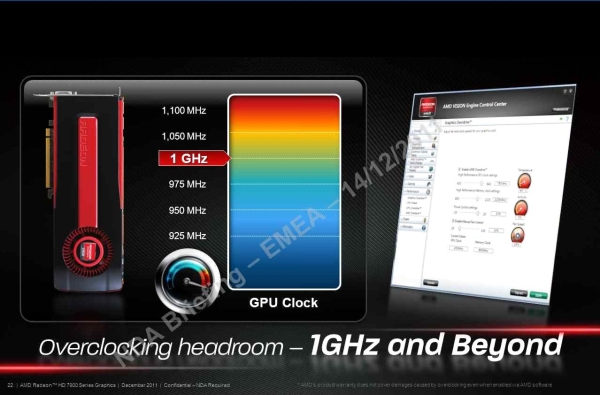 HD7970 would be compatible with the PCI-e Gen 3 Slots which offer an improved bandwidth performance of 32GB/s against 16GB/s on PCI-e 2. The GPU Core would already be clocked at 1Ghz but more headroom would be provided due to an 28nm cooler and power efficient design which would allow for beyond 1Ghz Overclocks.

The last slide shows the DirectX 11 "Tessellation" Performance improvements over HD6970 which are really good. In all 5 of the games tested, HD7970 showed an average of 2.0x - 4.0x improvement in Tessellated Areas while a relative performance increase of 1.5x - 2.0x over HD6970.