Yesterday saw the rise of the third company in history to reach $1 trillion in valuation. The company in question this time is the downright huge Amazon (NASDAQ:AMZN), joining Apple (NASDAQ:AAPL) in reaching the landmark.

Note: The first company to reportedly reach $1tn in valuation was PetroChina. This was based on 2% of the company being available for public trading in 2007, how reliable this valuation was could be left to question as a result of such a small percentage being made available.

Following a rise in share value yesterday to a high of $2050.50, Amazon finally joined Apple in surpassing $1tn in market valuation. While the company now finds itself lower than $1tn now, it's market valuation currently being $994.75 billion at the time of writing, there are a few reasons why Amazon could quickly find itself back above $1tn and also challenging Apple for its position as the most valuable company in the world.

You'll remember that it was only one month ago that Apple reached the landmark $1tn valuation. One month later we find that Amazon has done the same. It's this rapid nature of Amazon that will likely see them surpass Apple in the near future. For example, it took Amazon a little over two weeks to move from a valuation of $600bn to $700bn, compare this to Apple, which took one and three-quarters of a year. 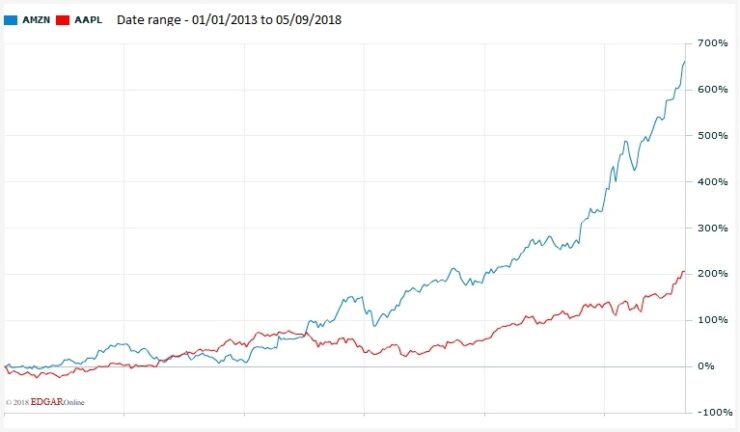 Looking at Amazon: The Rise of a Giant

When you compare the share prices of the two companies, the meteoric rise of Amazon is instantly visible. The company, started by Jeff Bezos, began by selling books online. Now, it acts as the third biggest retailer in the world. The company sells everything from the books it started with, to home appliances and even food. A large portion of sales also comes from the marketplace, where Amazon benefits from people or other companies selling to each other. Indeed, according to statista, third-party sales finally surpassed direct sales last year.

Amazon is also looking to further diversify their offerings from a sales perspective. The purchase of PillPack gives Amazon the ownership of a company that is licensed to ship pharmaceuticals to 49 of the US' 50 states, missing Hawaii. It also runs in line with their recent partnership with Berkshire Hathaway (NYSE:BRK.A) and JP Morgan Chase (NYSE:JPM) to create a non-profit healthcare company. While this entity may be nonprofit, it's likely that Amazon will see benefits either up or downstream. If not there, it will certainly see benefits in employee productivity and retention, should the aims of reducing the costs for employees come to fruition.

More important than retail, however, is the diversification of Amazon and the benefits it has brought. All of this comes from Jeff Bezo's belief that spending all profits on expansion early on will reap larger benefits in the future. This is something the investors have been more than happy with. It has seen the company move into streaming content through Amazon Prime as well as producing their very own content.

One recent push from Amazon Prime is into sports. The company recently acquired 20 Premier League matches per year from 2019 to 2022, the most watched sports league in the world. In 2015, for example, around 700 million people worldwide tuned in to watch Liverpool vs Manchester United. These twenty matches will be divided into ten matches on one bank holiday and ten on Boxing Day. Should this prove well, it wouldn't be a stretch to see Amazon move into streaming other very popular sports to increase its subscriber base.

Beyond The Marketplace - The future, Bigger than Apple?

One other major boosts is cloud computing. Amazon Web Service (AWS), which hosts such as Netflix (NASDAQ:NFLX), NASA, Adobe (NASDAQ:ADBE) and Samsung (KRX:005930), to name a few. It is now also the market leader in cloud computing. Last quarter the section brought in $6.1bn in revenue but, even more important, is the fact that $1.65bn of this was income. It's a segment that is likely to expand even further as even more companies, and governments, utilise the cloud. One example, which Amazon is the frontrunner for, is a contract with the US Department of Defense which would be worth $10bn to the winning company.

Amazon will also make great use of it with their move into video game development and publishing. Further diversification, this time into a $100+ billion industry that is only growing further, something the company has already invested in through Twitch, the perpetual license for CryEngine which they then modified into Lumberyard, their very own game engine.

One thing is certain, Amazon has diversified enough that there's could be little to threaten the company. Where one sector may take a slight hit, another can more than make up the difference. There are slight concerns about the Trump presidency, where Trump himself openly attacks the company and Jeff Bezos, including attacking Amazon's recent deal with the U.S. Postal Service. This is, primarily, as a result of the Bezo's owned Washington Post openly investigating Trump in the past.

The Amazon Washington Post has gone crazy against me ever since they lost the Internet Tax Case in the U.S. Supreme Court two months ago. Next up is the U.S. Post Office which they use, at a fraction of real cost, as their “delivery boy” for a BIG percentage of their packages....

However, despite any impacts these attacks may have on Amazon's share price, it certainly doesn't impact revenue. Indeed, the consensus is for Amazon to surpass Apple in revenue this year. As we recently reported, in the three months ending June 30th Amazon posted a revenue of $52.89 billion with income of $2.5bn. This is only likely to grow.