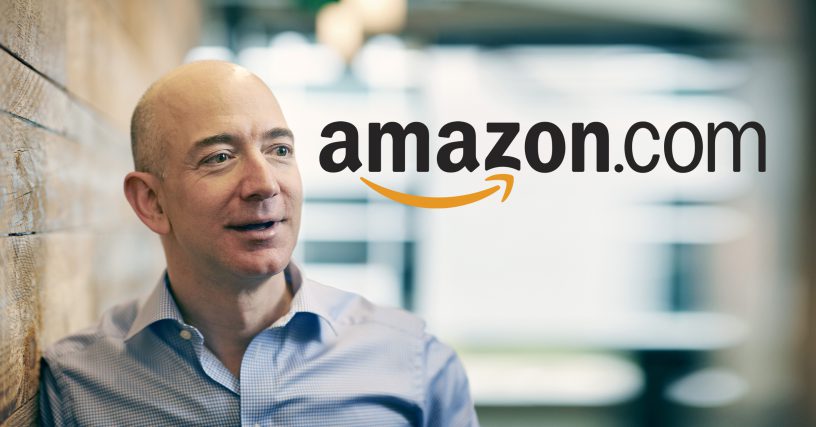 Amazon (NASDAQ:AMZN) just posted its most profitable quarter ever thanks in large part to North American Amazon.com operating income and staggering growth for its cloud and ad businesses. The e-commerce giant posted profits that exceeded $2.5 billion for the quarter. Compare that to a year ago when the company made a profit of.... $197 million dollars. A modest 1,200% increase. Amazon was pleased to report earnings per share of $5.07, easily doubling analysts' prediction of $2.50 EPS. 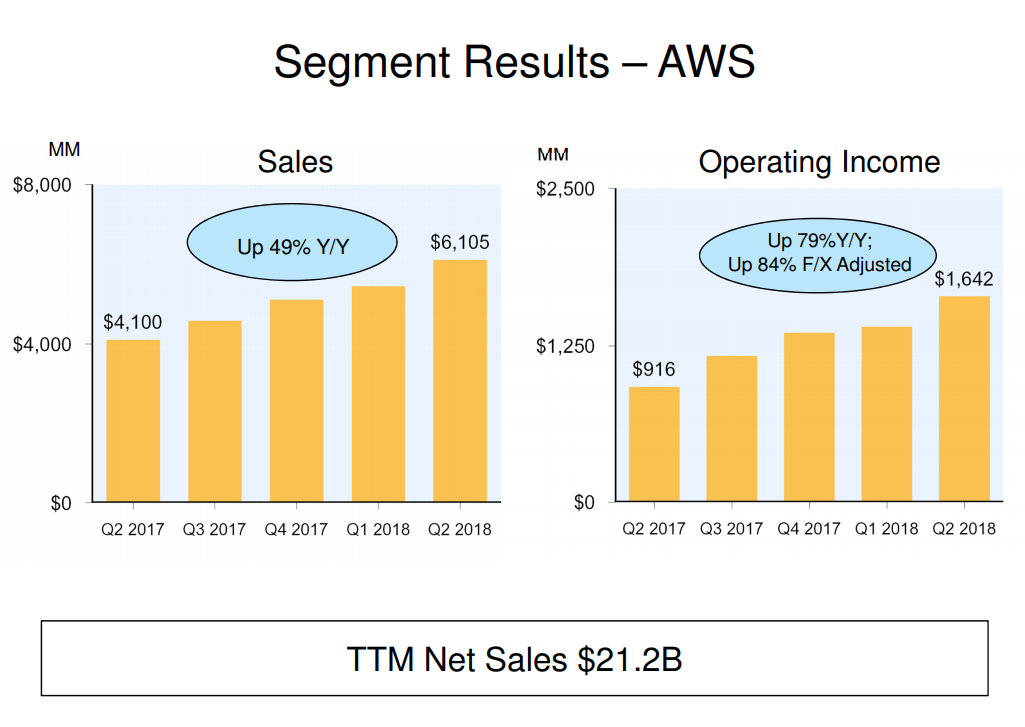 Bezos' plan for Amazon's cloud services must be paying off as the results show.

Jeff Bezos attributes the success of AWS to its huge head start on the rest of the industry.

“AWS had the unusual advantage of a seven-year head start before facing like-minded competition, and the team has never slowed down. That’s why you’re seeing this remarkable acceleration in AWS growth, now for two quarters in a row.”

Despite the increase from $99 to $119 for Amazon Prime service didn’t seem to affect its ability to gain new Prime members. Subscription revenue rose to $3.4 billion, a 57% increase over the year-ago quarter.

AWS is spreading and spreading fast. AWS announced new customers like Ryanair and Epic games, who have gone "all-in" on AWS. 21st Century Fox chose AWS for the bulk of its workloads for digital media across its brands. Verizon and its daughter company Oath went with AWS as a preferred cloud provider. Major League Baseball named AWS the official provider for.. machine learning for the MLB. Never thought I would type that phrase.

Even Formula 1 announced plans to switch data centers to AWS as well as, you guessed it, its own machine learning and data analytics workloads to AWS.

Amazon's subscription services, which besides Prime also includes Audible (e-books) and Amazon Music, grew 60% Y-o-Y to $3.1 billion in sales. Amazon will continue its partnership with the NFL until at least 2019.

Note: ESPN's current Monday Night Football contract is set to expire in 2020 and most rumors reasonably substantiate the fact that ESPN is bleeding cash and may not be able to afford the bid when it comes due.... It won't be surprising if Amazon comes calling with its billions.

Amazon counts ad revenue in its "other" category which enjoyed a massive 139% increase from last year, hitting $2.03 billion in revenue. 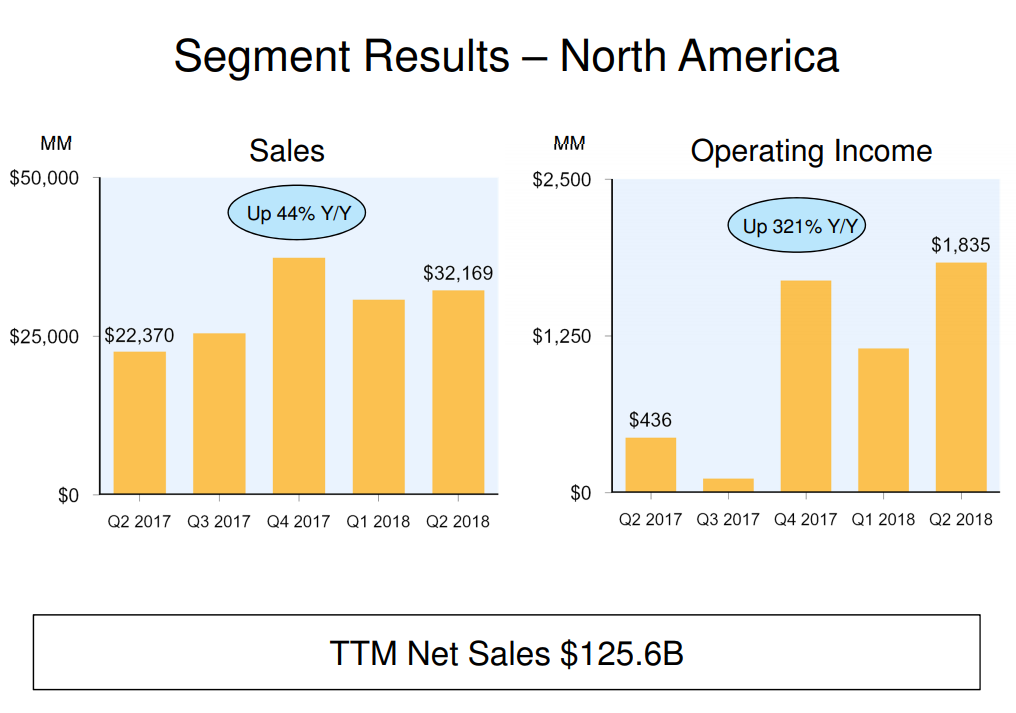 Amazon was much easier to predict for its legacy e-commerce business (the online store most consumers know Amazon for) and retail store operations namely - Whole Foods grocery stores.

Bezos and Co. have traditionally minimized profit margins on e-commerce business by re-investing heavily into fulfillment and distribution hubs and keeping product prices aggressive. Well take a look at that operating income. Revenue has continued to skyrocket, 44% year over year is incredible. However even more impressive is 321% income improvement y-o-y. Improved margins are to thank here.

Online sales in North America were massive at $32.2 billion yet Amazon only kept $1.835 billion of that as operating income. Its international e-commerce business actually lost money with a loss of $622 million on $14.62billion in sales. Keep in mind a year ago the International unit lost $724 so this seems to be headed in the right direction. 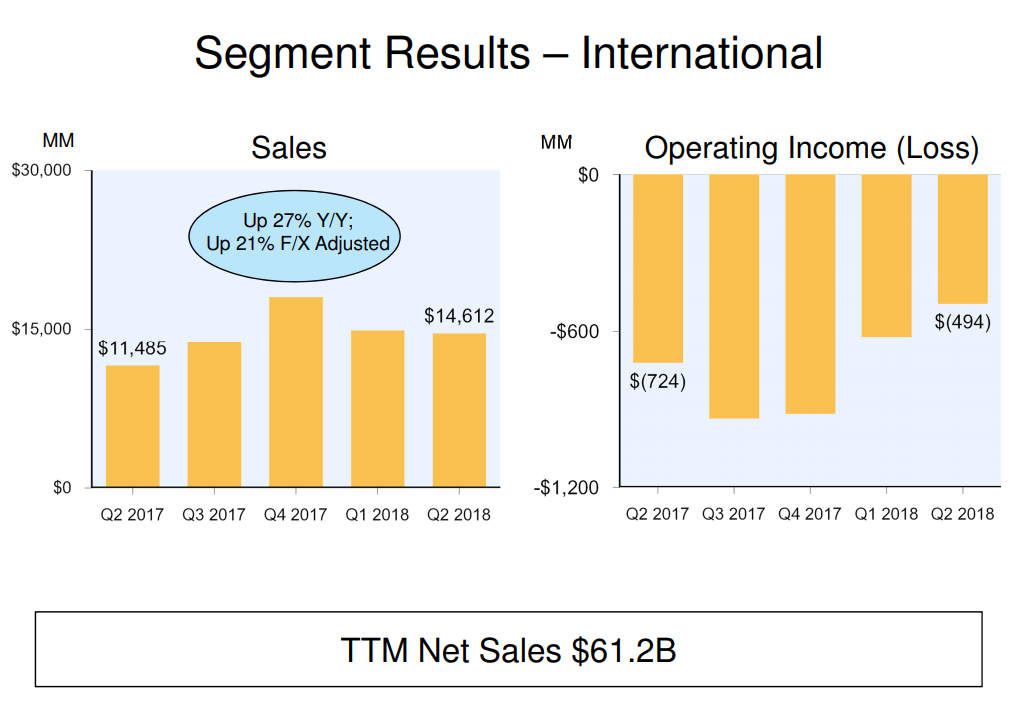 Amazon's Whole Foods, a chain of health-focused grocery stores, posted revenues of $4.326 billion, ever so slightly up from $4.26 billion in the previous quarter ended March 31.

Amazon issued the following guidance for the second quarter of 2018

Amazon will seek to continue to organically grow its e-commerce business via continuing to build out fulfillment centers to deliver more options for 1-day and same-day delivery to more of its customers. Amazon is really pushing to expand its Amazon Prime Now service offering ultra-fast grocery goods delivery, now in over 20 cities.

AWS and its subscription-based services will be key to continue to show healthy profits, as this is something Amazon has struggled with in recent years. More and more businesses look to cloud-enabled services and platforms to drive their own operations and sales and Amazon is uniquely positioned to continue to capitalize on that.

The second quarter of this year has proved very successful for the company. The company is finally showing that it can leverage its massive revenue into actual income. Amazon is investing (spending) at breakneck speed and is now managing to do that while keeping real net income in the billions.

AMZN was down all day Thursday as investor fears swirled in the wake of Facebook's disappointing numbers earlier in the week. Prices have surged in after-hours trading later Thursday evening, hitting $1,882, which is its highest ever recorded trading price. If impending quarters continue this growth pace look for the stock to reach new records as we move through the second half of the year.