There has been some word recently regarding a Google Play version of the Samsung Galaxy S5. Google Play edition devices are android devices officially endorsed by the company. Even they do not carry the Nexus branding, they are shipped with a stock build of the Android Operating System. This system is modified according to the device it comes with, catering to some specific features. Google I/O went without any word about the Samsung Galaxy S5 google play edition, but it did see some other releases included the much anticipated Android L. 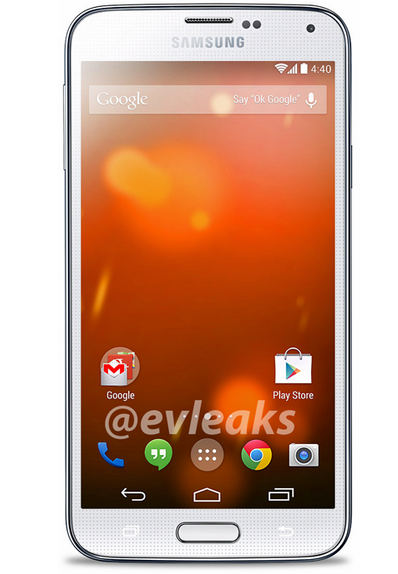 There has been no official word yet about whether Samsung will actually go ahead and launch the Google Play Edition of its Galaxy S5 smartphone. But a render has been leaked by today of the flagship phone by @evleaks. As it can be seen from the render on the left, the device seems to have two sets of navigation keys. These are of course, for both hardware and software. The Samsung Galaxy S5 Google Play Edition will of course be expected to run a stock version of Android KitKat coupled with a stock Android launcher.

The two sets of hardware and software keys might not be that surprising however. If you were to visit the official android website, you would see that it also has an image of the regular Samsung Galaxy S5. This image is alongside other image of the Google Play Edition handsets. It also comes with what looks like the Android KitKat. So there might actually be a Samsung Galaxy S5 Google Play Edition handset with two sets of hardware and software keys. Stay tuned for more folks, since there has been no official word yet.