Over the past week, the number of leaks related to Xiaomi's Mi Mix 3 is starting to increase in pace. The current trend in Chinese smartphone markets is all about pop-up front and rear cameras, as manufacturers try to increase screen-to-body ratio even more.

Right now, a handful of leaks do suggest that Xiaomi will follow the bandwagon started by Oppo and Vivo. The company is in a tough spot indeed as it will now struggle between its CEO's inspiration from Appl;e and the need to keep market shares up. As we're weighing this, another alleged leak has taken place for the Xiaomi Mi Mix 3. Take a look below for more details.

Xiaomi's Mi Mix lineup is notable for its unique front camera setup, as the sensor is located on the bottom of the lineup's smartphones rather than at the top. This creates a nice illusion of a border-free display but in reality, gives them a rather thick bottom.

This is the reason why latest leaks for the Xiaomi Mi Mix 3 are creating interest. Today's alleged live image marks for the third such report that displays the smartphone with a thin top and bottom - leaving no room for the front camera sensor apart from a pop-out mechanism. 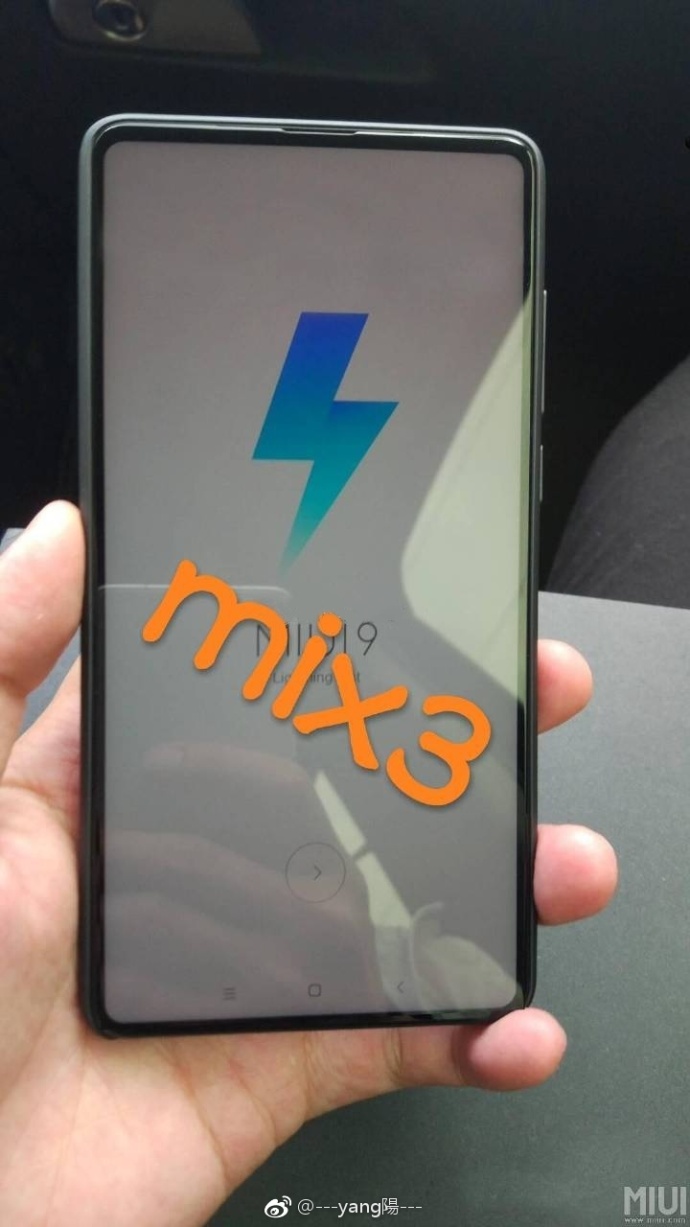 As you can see above, today's alleged Xiaomi Mi Mix 3 live image does appear as quite authentic. It follows the lineup's soft, rounded corners and does not feature a top or bottom bezel. Unless Xiaomi has found a way to integrate the front camera sensor under the device's display, given that the image is authentic, the smartphone should feature a pop-up camera sensor.

Another possible explanation for the image is that perhaps the device is a prototype which is unlikely to see the light of day. However, the teaser leak that we mentioned above came from a very reliable source. This fact alone suggests that Xiaomi is definitely looking forward to launching a pop-up front camera sensor on the Mi Mix 3.

After all, it's been years since the company patented the feature and perhaps it feels confident enough for the technology to work without any problems. If so, then Xiaomi won't be accused by its users of being slow on adopting mass market features - a criticism that has been hurled at Apple quite a few times. Thoughts? Let us know what you think in the comments section below and stay tuned. We'll keep you updated on the latest.