Electronic Arts has released a beautiful gameplay trailer of Unravel at Gamescom, that showcases how the puzzle-platformer plays and how players can use yarn to solve environmental puzzles. The puzzles are all physics based, and rely on the player's creativity.

Unravel follows a tiny new character made from yarn

Unravel introduces Yarny, a tiny, new character made from a single thread of yarn, who embarks on a seemingly larger than life journey through the breath-taking, lush environments of Northern Scandinavia. Using Yarny’s small thread and big heart, players will traverse nature’s obstacles in this unique physics-based puzzle platformer.

“The idea of Unravel was created from a very personal place. We didn’t start out by saying we’re going to make a puzzle platforming game. We started by thinking more about our lives, and the things we hold meaningful. We wanted the game to have a heart and the gameplay could always be designed to represent that. The tale of Unravel is about love, and the bonds between people. And the yarn is a representation of that. Yarny’s red thread is the tie that connects everything in the game, from the gameplay mechanics to the story, and the people in it.” 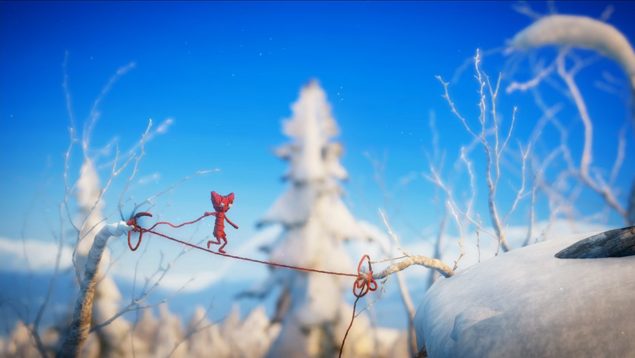 Unravel takes advantage of the Frostbite engine with impressive results

Unravel is a game all about overcoming obstacles, both big and small. Some challenges are simple, like using Yarny’s thread to swing across a gap, or rappel down a tree. Sometimes things get more complex, and players will need to use Yarny’s thread in clever and creative ways to find the path forward. Whatever the case, no feat is too big for Yarny. Along the way, witness him unlock a heartfelt story about love and longing, and the ties that bind. The tale is told completely without words and Yarny is the red thread that runs through it all.

Unravel will release for the PC, PlayStation 4 and Xbox One. No release date was given, but the PC version is available for pre-order for $20 via EA's Origin store. We will bring you any new on this beautiful and inspired game as soon as it becomes available.