Much like Electronic Arts, Activision Blizzard have seen a fall in share price. This is likely following the reveal of conservative Q4 guidance figures. The company has predicted $2.35b in adjusted revenue, with an EPS of $0.82. This is below analysts’ estimates of $2.43b and $0.89 EPS according to Thomson Reuters IBES'.

These figures are driven primarily by Destiny 2, which is something we reported on earlier today. Launched on the 6th of September, Destiny 2 is already the biggest selling console game for 2017. Total consumer spend on the title has improved on Destiny 1, as has average revenue per user.

Destiny 2 should also see itself making a mark in Q4. The game recently launched (October 24th) on the PC. In addition to this, on December 5th the first expansion pack of the game will be released. Should this attract the same level of attention that the core game has attracted, it will prove to be a major boon to the company. 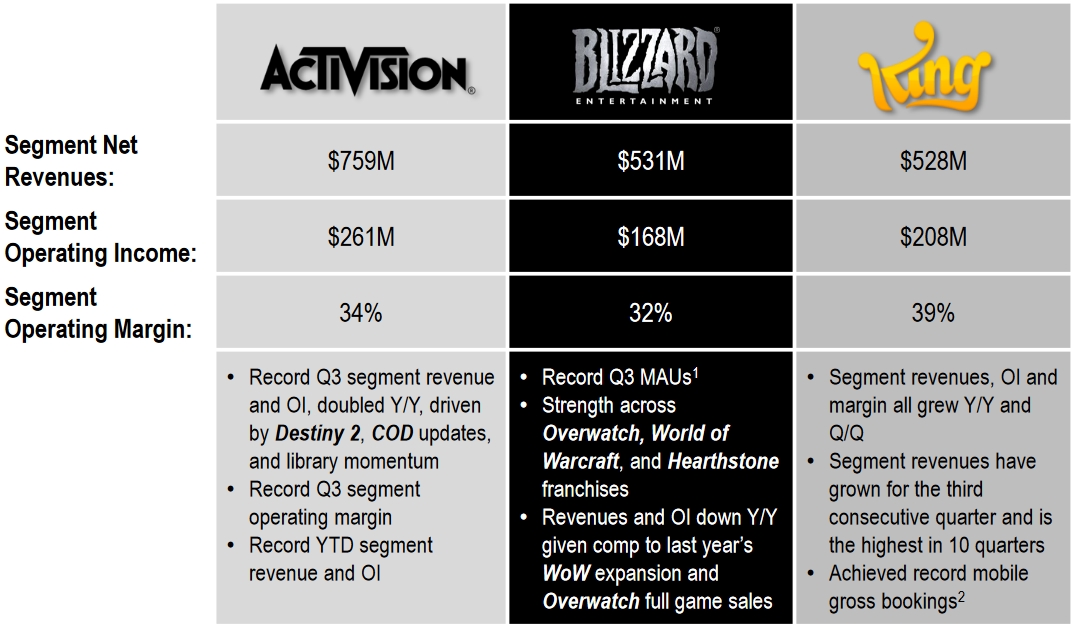 The Breakdown of Blizzard and Mobile

One of the largest losers of the quarter was Blizzard. Following the incredible success of Overwatch, the company has seen itself fall a significant 27% in year on year revenue. This fall from $729m to $531m can be largely attributed to the World of Warcraft Legion expansion pack, which released during Q3 2016.

Driving results for the Blizzard segment are the ongoing success of microtransactions within Overwatch, Hearthstone and World of Warcraft. In addition to this, World of Warcraft still proves to be a success in revenue gained through subscriptions. World of Warcraft has actually seen a stable number of monthly active users (MAUs) year on year.

As a result of new content or events, both Hearthstone and Overwatch have actually seen users and time spent on the games grow. Hearthstone has seen time spent by users grow by double digits year on year and the community reach 35 million people. Overwatch, with two recent events for summer and Halloween, has increased its userbase and the sale of in-game items.

An upcoming benefit for Blizzard will be the upcoming Overwatch League. With pre-season beginning next month and the league starting as a whole in January, the company is placing large hopes on it taking the growing eSports scene by storm. Twelve teams have signed up to participate in the very first Overwatch league and have revealed their names and logos.

Blizzard is looking to take advantage of this through physical and in-game sales of team-related content, hoping fans will support the teams much like they would their local sports team. Furthermore, developers are looking to encourage users to follow the league by creating ways to enhance the viewer experience, such as new camera angles as well as personalised jerseys for the teams.

The Throne of KING

KING sits in a very strong position for activision. This is, however, very dependent on the metric that you use. Unlike Activision and Blizzard, KING has seen yet another fall in MAUs. Q3 has seen MAUs of 293m, a year on year fall of 101m. Fortunately for this segment, time spent by these players are at record highs.

Moving inline with the increase of time spent by users, the number of paying players has actually grown for the first time in seven quarters. Revenue generated per users has also grown now for nine-quarters running. This has put KING in the position of top mobile publisher in the United States. Candy Crush also returned to the top spot of the U.S. android and iOS stores as it celebrated its fifth anniversary.

What makes the conservative guidance offered by Activision all the more surprising is what they have in line for Q4. Today has marked the release of Call of Duty: WW2. The perennial franchise has always been a strong earner for the company, even despite declining sales over the past few iterations. Call of Duty could see a rise following the return to a historical setting, much like what happened with Electronic Arts' Battlefield 1.

Activision have revealed that preorders of Call of Duty: WW2 have been very strong for the company. As mentioned earier, the popular Destiny 2 will have its first expansion release on December 5th. Should this be the case, it would put the franchise on an upward trajectory once again.

There's little doubting Activision Blizzard and their trend of beating both guidance and analysts' expectations. From the perspective of a gamer, I simply can't see Call of Duty: WW2 not being a bigger hit than last year’s Infinite Warfare. In addition to this is the large sales that will naturally come from Destiny 2's new addition.

As a result of this quarters figures Activision Blizzard have raised their full-year forecast to $6.85b in adjusted revenue and EPS of $2.16.