Yesterday Electronic Arts (NASDAQ:EA) released figures for their second quarter of the 2018 financial year. One immediate impact has been a fall in share price of $6.88, or 5.75%, at the time of writing. Part of this is likely a result of guidance for the Q3 being lower than estimates by analysts.

For Q2, three-months ending September 30, EA actually saw them surpassing guidance. Net Bookings, which includes revenue gained in the quarter as well as additional deferred revenue from online games, hit $1.179 billion. This is much in line with the $1.18 billion analyst estimates, according to Thomson Reuters. 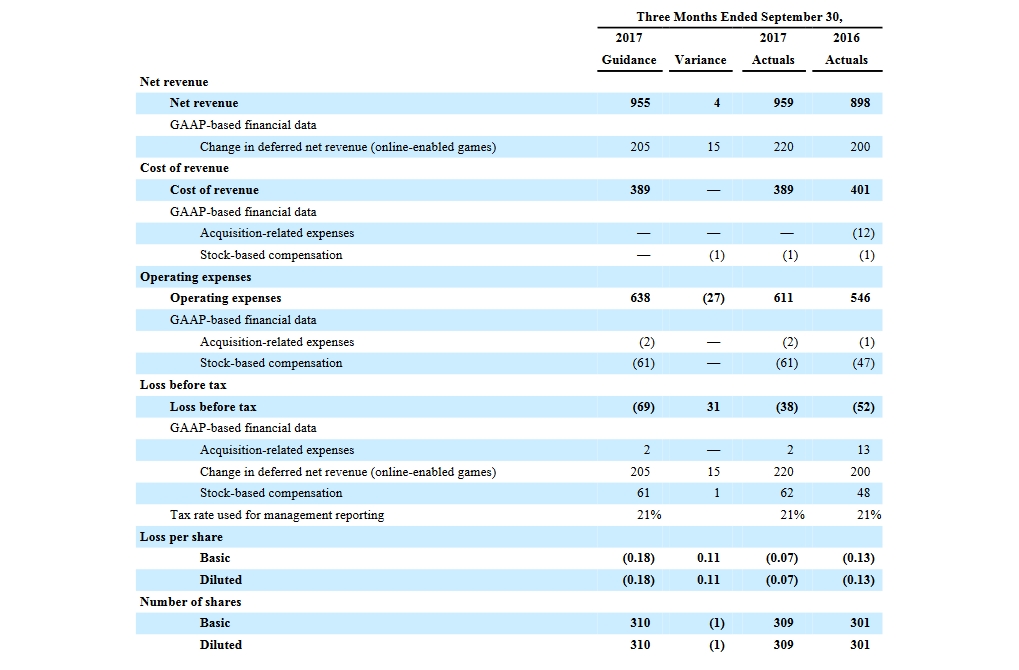 Indeed, the results of the second quarter have surpassed guidance across the board. Basic revenue was $959 million, $4m higher than guidance and a 7% year on year improvement. Cost of revenue hit guidance but with operating expenses being $27m lower than expected, it has served the company well.

This has been driven by the success of Electronic Arts annual sports titles. FIFA 18, Madden NHL 18, NBA Live 18 and NHL 18 have all been met favourably. One leading factor of EA's sports titles is the inclusion of digital modes. FIFA Ultimate Team has been successful for a number of years now, with the Madden iteration gaining a 25% increase of players.

In addition to this, Madden has also seen the engagement of fans with over 50% playing the 'Longshot' career mode. Engagement has also expanded across other titles, with the unique player base of FIFA mobile having grown to over 113 million. Battlefield 1 has also seen its community grow to 23.5 million players and the PC version of The Sims 4 has seen a 40% year on year growth of players.

Moving to digital is far from surprising. In Q2 alone digital revenues have increased 19% year on year. This has been driven by what EA call Live Services, which generated $350 of the $579m in digital revenue. It has already proven to be incredibly successful for Electronic Arts, particularly with the inclusion of microtransaction based features like Ultimate Team. Other content also includes downloaded content and passes featured in titles like Battlefield 1 and The Sims 4. 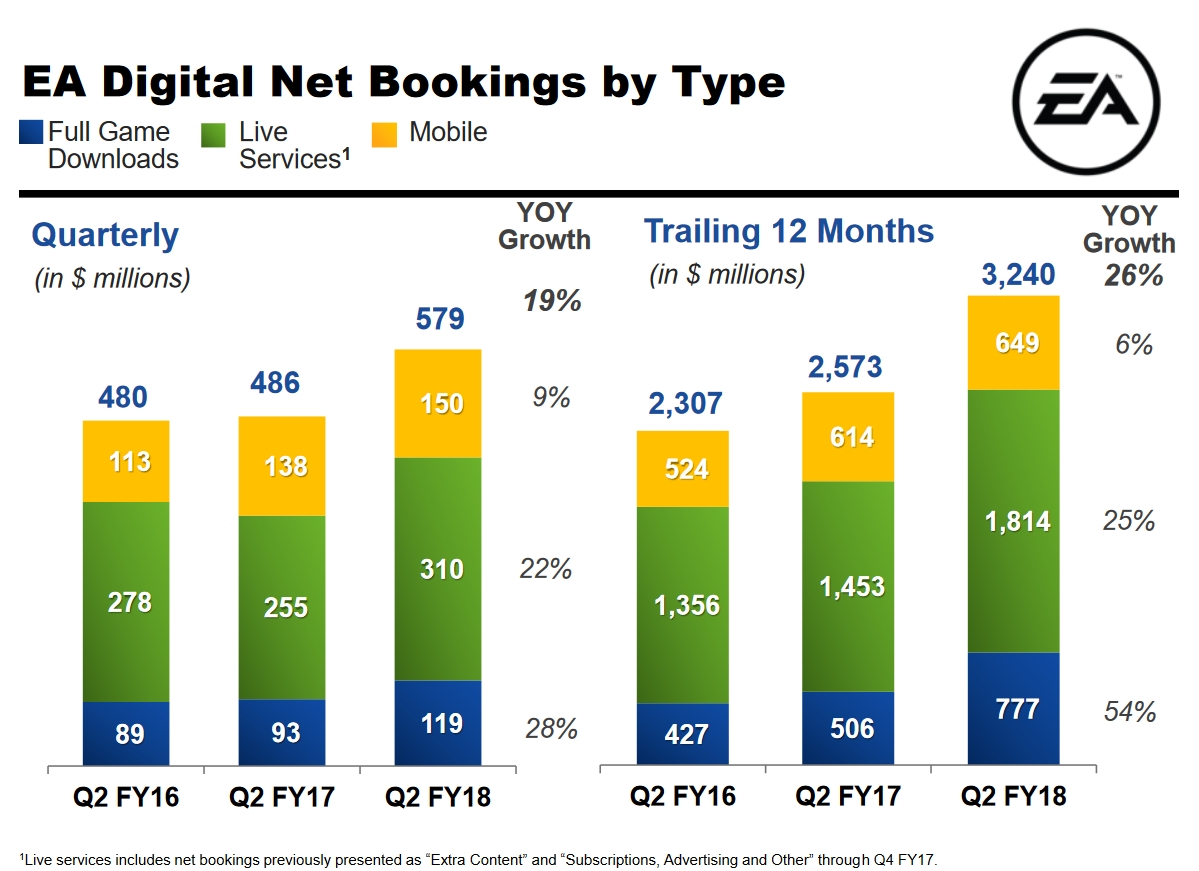 Further to this is the growting revenue from mobile titles. Mobile titles hit $150m in revenue, which is a Q2 record for the segment. This growth was primarily attributed teo the mobile titles Star Wars Galaxy of Heroes and Madden. The resulting revenue is from full game downloads on consoles and the PC, with a growth of 28% year on year. Driven by further uptake of digital copies by consumers, as well as the success of Battlefield 1 and Madden NFL.

EA have revealed that, during the quarter, 36% of unit sales were digital based copies. The previous year featured just 30%. Moving in line with this "FIFA 18 launched just days before the end of the quarter, but based on the first three weeks of sales, it was about 25% digital, up from 16% in the comparable period for FIFA 17. The digital portion of Madden sales also increased 9 percentage points year on year, to 34%".

Guidance for Q3 2018 appears to be the leading factor behind the drop in share value for the company. Guidance also predicts $1.135 billion revenue, with and additional $865m in deferred revenue. This total net bookings of $2bn comes slightly below analysts’ predictions of $2.06bn. It is also a 3% year on year loss, lagging behind the $2.07bn generated Q3 2017. The stated cause of this is a result of "growth in live services offset by the effect of different product launches".

It's also not impossible to discount the recent closure of Visceral Games as a mitigating factor. While it's not likely that this had any real impact, it did bring attention to Electronic Arts. Particularly as this closure also came with the indefinite delay of a Star Wars game that the studio had been working on.

One thing is certain. EA are positioning themselves to further take advantage of the growing mobile market, as well as the digital services segment of video games. This has already proven to be successful with the adaptation of Ultimate Team modes across their sports titles. In addition to this is the huge uptake of the FIFA, Madden and Star Wars mobile titles.

CEO Andrew Wilson himself stated "It was a strong second quarter for Electronic Arts, with players around the world captivated by our new EA SPORTS titles, top-performing mobile games, and expanding eSports competitions". In addition, he touched on the move to digital by stating "The digital transformation is accelerating across our industry, and we are well-positioned for continued growth with more stunning new titles, thriving event-driven live services including competitive gaming, and continuing innovation for our players on all platforms."

The company also already has plans further down the line. To drive revenue in 2019 EA will have iterations of its sports titles. As well as these, high profile games like Anthem will be released, plus a new Battlefield title. 2018 will also see the World Cup in Russia, which is predicted to drive interest in Football (Soccer) related games.